Roll out the red carpet, the Queens are here! We’re coming to you with the third major Arboria update. Queen’s Fall introduces features such as a new Symbiont, Traits, Enemies, and much more. Check out the full list of changes.

We’re coming to you with the third major Arboria update. Queen’s Fall introduces features such as a new Symbiont, Traits, Enemies, and much more. Check out the full list of changes.

The origin of this mysterious weapon is unknown to Yotunz but that doesn’t stop it from being very effective. With its extra-long reach and sharp, bladed end, the Halberd is perfect for eliminating enemies with a thrust or swing.

Attack enemies from a distance with long-range Chakrams! They’ll never know what hit them.

Basic - Yotun throws a Chakram which pierces through enemies and comes back to him.

Alternative - Varies depending on the Element of the item:

Shafts are used to quickly travel to the lower levels of Durnar. In order to use a Shaft, you need to power it using a Battery (Rata is only able to carry one Battery at a time). Yotun can only travel downward so if you want to use them efficiently, you need to power as many Shafts as possible.

Tougher enemies in the new Biome have Tails which prevent players from one-hit killing them. At a certain HP threshold, the Tail falls off and changes the behavior of an enemy.

The first boss you’ll have to face is—how shall we say this?—ENORMOUS AND HARD TO KILL! One minute you’re having a nice walk through a dark lair and the next you’re going head-to-head against a boss with tons of health that comes in three elemental versions. You want to progress to a new Biome? You know what to do. Good luck. 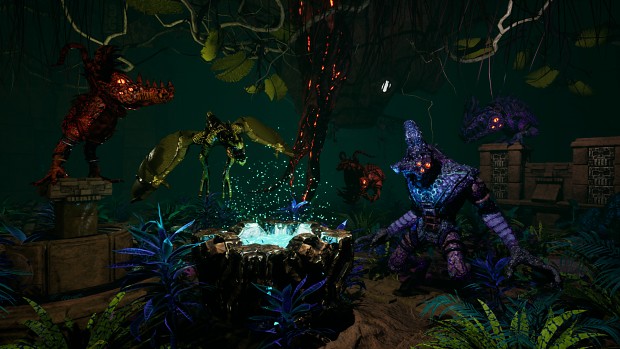 As if you didn’t have enough to worry about, there are a few new enemies to...worry about. Bitey is a real pain when he bites. Chizard is hard to kill when he’s flying around your head. Warriors won’t go down with one strong blow but you might want to focus on that tail first to make things easier. Just an idea.

Time for a personality change? Try out these new traits:

This update gives you a new contact to visit, Tzukal da Kooky. Find him on the second floor of the unlockable village and let him keep your armor in good shape. Also, have some cash ready for some passive perks.

Heal enough roots and the Father Tree will grant you access a brand new area filled with Shafts. Take a shortcut on your adventures through Durnar and get right to the action.

The Queen’s Fall Update is the third of several major updates we are releasing on a monthly basis. The fourth one - the Reptilz Update - is now looming on the horizon with a brand new biome, boss, symbiont, new enemies, and more!

Have you played the new update yet? Head to the comments section, Steam Discussions, or Discord and let us know what you think!

It would be better if you raised the camera to the height of XCOM: EW and mostly remained there. So your players see these units from above and farther away. Introduction of tactical turns wouldn't hurt the game.
Your models - as they are - might be hard to identify with from a "3rd Person shooter" point of view. They would look a lot more appealing, if you showed them in the style of Etherlords I-II.