We've been updating our models and AI. Take a look... 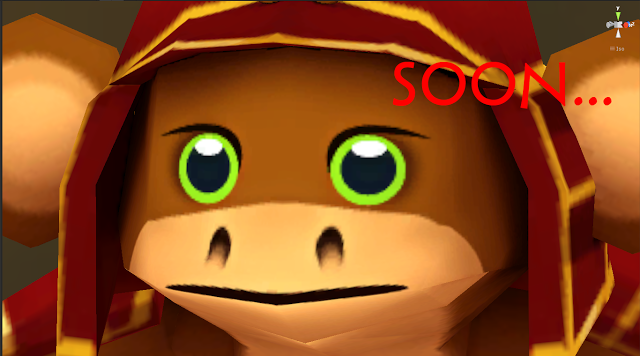 Last time we talked a lot about aesthetics and mood. We're not quite done with that subject. Our character models were a bit outdated, as they were made as placeholder graphics to test the mechanics and animation at the very beginning of our development. As our game begins to slowly bloom from its ugly and humble beginnings, it was time for the characters to get themselves into shape also. To give you an idea what kind of changes are happening, take a look at this comparison picture of the old and the new monkey-guard model: 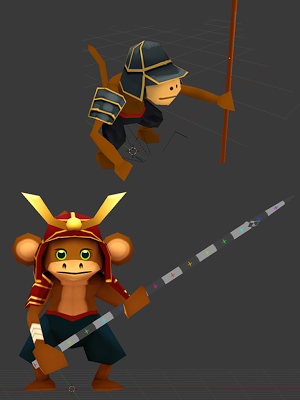 Enough about the looks. Let's peek under the hood for a moment. Our coder has been busy churning the new features in. From a design point-of-view the game was played like a hack'n'slash rather than the stealthy-sneaky-ninja style it was meant to be played. Two things were bound to be changed:

The stealthy part was easy. We made two movement speeds for the Ninja; sneaking and running. Sneaking makes no sound, and running makes a lot of sound, alarming the nearby guards. Also, dead/unconscious guards can be dragged around and hidden.The tougher part was the alarm A.I. (short for Artificial Intelligence). A lot of thing were changed to make the raising of an alarm more unappealing. Here's a short list of them:

We had a long and interesting talk with Pascal Luban (designer of e.g. Splinter Cell) a few weeks ago. He offered some good insights and constructive criticism. One thing that was quite obvious, but somehow left out of our design, was the notification time for the player before an alarm is raised. You know, something like "Huh? What was that? OMG it's a Ninja! ALARM!" It is quite essential for a pleasant gameplay experience for the player to be on top of things, so that when an alarm is actually raised, the player knows it's his/her fault (rather than the game is being unfair). So that's fixed also *phew*
If you are a casual gamer and/or thought to yourself: "well gosh darn it, I liked the idea of swinging my katana like a maniac to the funnily dressed simians", then fear not; the game can still be played like a hack'n'slash, we just offered more challenge to those who like to sneak their way through levels.So that's what has been mostly happening this week.

Tune in next time, and in the meantime tell a friend and/or follow us at:FacebookTwitterDevblog

Thanks! We aim to please ^^