Post news RSS The Living Walls update for ScourgeBringer has now been released! 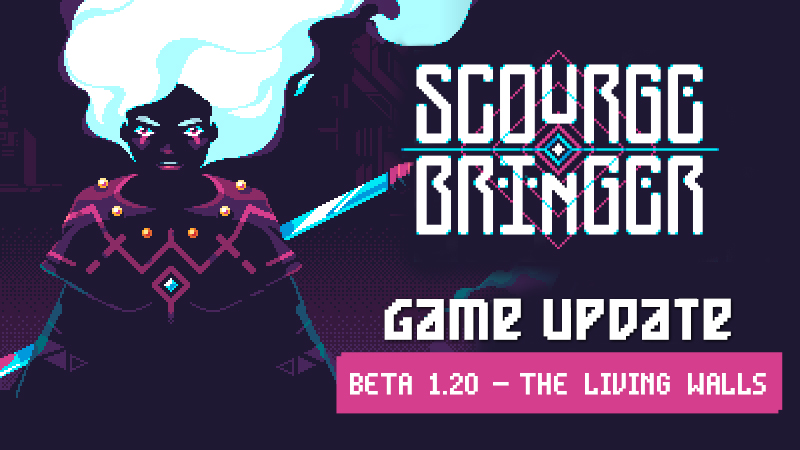 The Living Walls update has now been released and we’re so pleased to see how you enjoy it.

Wishlist the game on Steam:
Store.steampowered.com

💞 We’ve been looking through the community feedback and applying changes where it has been both feasible and inline with our own vision of the game. We’re truly humbled by the amount of people who interact with ScourgeBringer on a day-to-day basis. We wouldn’t be here without the players support and we’re really thankful we get tons of feedback throughout our journey! 💞

Okay, but enough of the cute stuff. Let’s get into the UPDATE! 😈

This update contains a whole new world, The Living Walls. Yes, we’re like those movies who put their title in the film script. We’ve also included 5 new Blessings and 4 new Skills. We’re looking forward to your feedback on all these elements!

To all our achievement hunters, we also have 6 new Achievements! Who will be our world-first, we wonder? 🧐

For those who are curious, here is the full changelog:

- Gyroscopic Compass: When standing still, BLAST.32 will point toward the next Guardian, or toward the Judge if the Guardians have been taken down

- Concussion: Smashed enemies are stunned for 50% longer if they hit a wall or another enemy while being stunned

- Dragon Punch: Allows to combine the Smash and Dash attacks together to perform the most savage counter attack (has a cooldown)

- Extreme Torque: The more an enemy has been rapidly hit by slashes, the more a Smash will be powerful on it

- The hot stuff: Slows down incoming bullets as long as the player is standing still

- Quality looter: dropped items have 20% chance to be their upgraded equivalent

- Garo has more things to tell depending on the context

- Blood Altars now show on the map with a "!" mark if no Blood Blessing has been picked yet

- Smashed bullets are now tinted and have a particle trail

- Exploding enemies will no more be targeted by the aim assist

- It is no more possible to do a Smash+Dash without the proper skill (it was never intended and the actual Smash damages were not dealt throughout the Dash anyway, it was just a visual illusion)

Fixes a crash when entering a new room

Fixes various typos throughout all languages

We will still continue to collect and consider feedback throughout our journey over on our Discord. Feel free to come by and say hello! (https://discord.gg/flyingoak)