As some of you have noticed, we haven’t spoken about “the bridge” in this campaign very much. This is actually one of the features we are most excited about, as it plays an important role in how we can offer and expand upon non-violent options in the game.

Hey everyone, time for another update! Don't forget to check out our continuing Kickstarter campaign at Kck.st

Since we have been covering a lot of the more technical / creative aspects lately, I thought it might be a good idea to shift focus towards a bit of the game design and some of the unique aspects of Blooms game mechanics and world.

As some of you have noticed, we haven’t spoken about “the bridge” in this campaign very much. This is actually one of the features we are most excited about, as it plays an important role in how we can offer and expand upon non-violent options in the game.

To catch everyone up, “the bridge” is where the energy of life exists overlaying the normal world and its inhabitants. Rumor has it that with enough training, one can begin to open themselves to seeing and even walking within this space at will. Inside the bridge one can see the true nature of friend and foe, past their physical aspects and directly into their hearts.

Sounds good enough on the surface, but let’s talk about how that actually translates to game-play.

First, this can be used at a distance to get a sense of enemy’s moods and understand the reasons why they are hostile. Hopping into the bridge to get a deeper feeling for the situation, and better strategize how to approach. Is an enemy only hostile when you get close? Are they hostile because they are hungry? Or, do they have a deep hatred for you? Knowing the “why” behind aggression is a valuable tool to being able to combat it.

Second, if you are able to focus enough in these areas, you will get the ability to move in the bridge; only you move apart from your physical self. At first, this distance is very limited, but eventually you will find yourself being able to spend more and more time exploring. Also note that the flow of time in the normal world is paused when inside the bridge, adding a new layer of complexity to your strategies.

As your “bridge self”, you are then able to touch other creatures to try and connect with them on some level. This lets you try to manipulate moods, or even try to calm the anger of the most violent of creatures. The “how” you do these things after touching a creature is still a secret… but let’s just say we are trying to make this non-violent option just as engaging as the violent option is in terms of fun and game play. 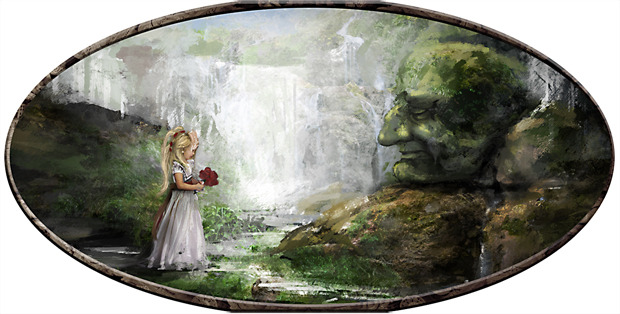 After that, the bridge also has a range of abilities you can unlock. From being able to pull your physical body through the bridge to where your “bridge self” stands (seeming to teleport), to being able to influence the normal world to some small degree. But be careful, for the bridge is not without its dangers.

Hopefully this gives you a little sense of how things are going to progress. Like we said, we want all options to be engaging for players. Action RPGs have traditionally only catered to mindless violence… we want to change that.

As always, thanks so so much for all of the support! We are past the 75% mark, and just need a final push to get us over the goal :) Please keep spreading the word to friends and family (and strangers! Strangers love hearing about random things from random people).

Sounds like a very interesting concept. Can't wait to see this released :]

This game sounds breathtaking. I can't wait to play it!