In which load times are hacked down, and extra sub-dungeons are added.

Posted by UltimaRatioRegum on Oct 26th, 2013

For those who didn’t notice my incessant spamming of this link on every media outlet possibly available to me, I was interviewed for Rock Paper Shotgun earlier this week, and the interview can be found here: Rockpapershotgun.com. The response has been insane, and has made me very glad that I chose a higher hosting package for this site than I initially expected to need. Several gigabytes of downloads have taken place in the last week and the game is still flying off the shelves (metaphorically speaking) as I type this. Thanks to all the new people who’ve found the site, downloaded the game, followed on Facebook,Twitter or Twitch (where I regularly do coding and Q&A streams) - I hope you like what you’ve seen, and that the development plan and the future objectives for the game sound like something you’d like to be a part of. I make a point of replying to every single comment, email or tweet I get, so if you have any comments, observations, criticisms or whatever else, do please send them my way. I’m well over 50% of the way through developing version 0.4 (see the development plan for more info), and it will be released before the end of the year.

And on that note, this fortnight’s update is a relatively short one, though a lot of work has been done. I’ve now enabled the ability to export the map grid you’re currently on into a .png file (much like you can currently export the various world map overlays by pressing ‘X’). More importantly, I’ve been redoing all the terrain generation, and have reduced the loading and saving times on all map grids by between 50% and 90%, depending on what’s on the map grid. Grids with buildings and interiors naturally take slightly longer to generate than other areas, but the reduction is very significant. All of those who say the game takes too long to load some segments (you are undoubtedly correct) can hopefully, now, rest easy that they won’t be waiting through the same kinds of load times. I’m also changing how the game stores data so that the save files will be less colossal; this is an ongoing process, but the save files for 0.4 will certainly be smaller than their titanic 0.3 brethren. The remaking of the terrain generation algorithm is perhaps 90% completed now, and one thing I’ve been doing is also adding more detail to the ziggurat regions. I felt they were looking a little sparse, so it seemed appropriate to do something to improve them a tad: 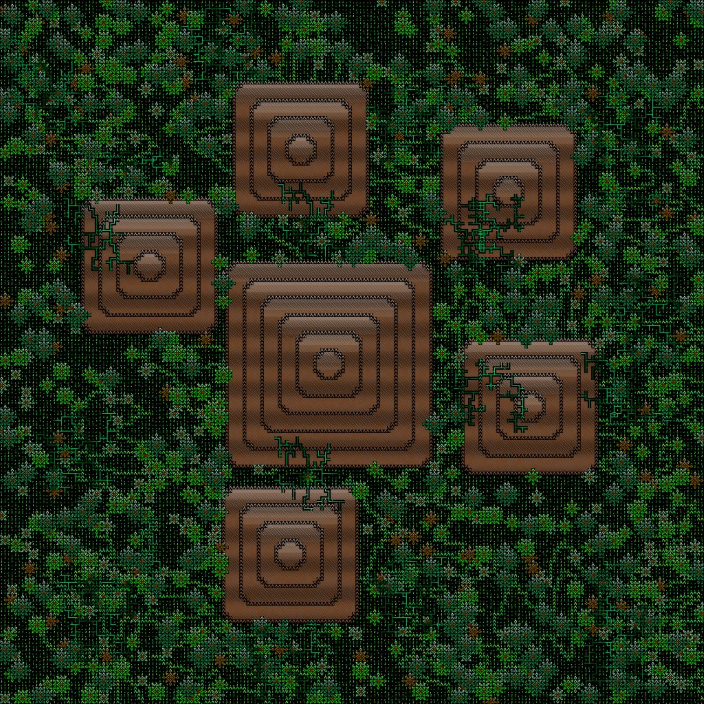 And a gif of these structures at dawn, day, dusk and night (note also the changing shading on the trees):

For the time being these extra structures are just decoration, but in the future they too will be fully explorable, and each ziggurat region on the world map will have a lot more content in it than it currently does. In line with some feedback I’ve got, I’ve decided that there are only going to be three ziggurat locations on the map – each one will contain a single large ziggurat that will contain a key fragment, and the other ziggurats will contain a number of other things in them. I’d like each map grid you end up exploring to be a significant thing, so each grid area (like the one above) is going to contain a far larger amount of content. I’m now switching back to finishing off throwing and projectiles once and for all – perhaps only a day’s work remains there – then I’ll be moving onto handling the health system. Next week we’ll have a summary of all the other developments over the last month and then follow that up with the start of health and injuries.