Surface is a very simple game, and here are some simple detail and examples!

Surface is definitely a love letter to classic exploration adventure games, and much like that it's a jump-in and play sort of game. No tutorials, no cut scenes that take you away from the game, no "Press A to Jump!" blurbs that appear over the player. The game is designed in such a way that it will allow the player to teach themselves how to manage obstacles, allowing them to build satisfaction in their accomplishments and develop their own play style. An example of this in action-

The player will be placed in a situation where they must face a boss that once defeated gives the player an essential upgrade. The entrance to the boss is set up so when the player goes to the boss chamber, they must fall down too far for them to jump back up after defeating the boss. This presents the player with a bit of a situation after defeating the boss- They know they've collected an upgrade, but they also know they can't jump high enough to exit the boss chamber the way they came through. The player will notice however a fairly obvious block on the on the side of the boss chamber covering an exit (that they've seen before in different areas of the game), and what appears to be a small pit. After examining this further, the player should make the connection between the upgrade they've just obtained, and that strange block and push the block into the pit, allowing them to exit. 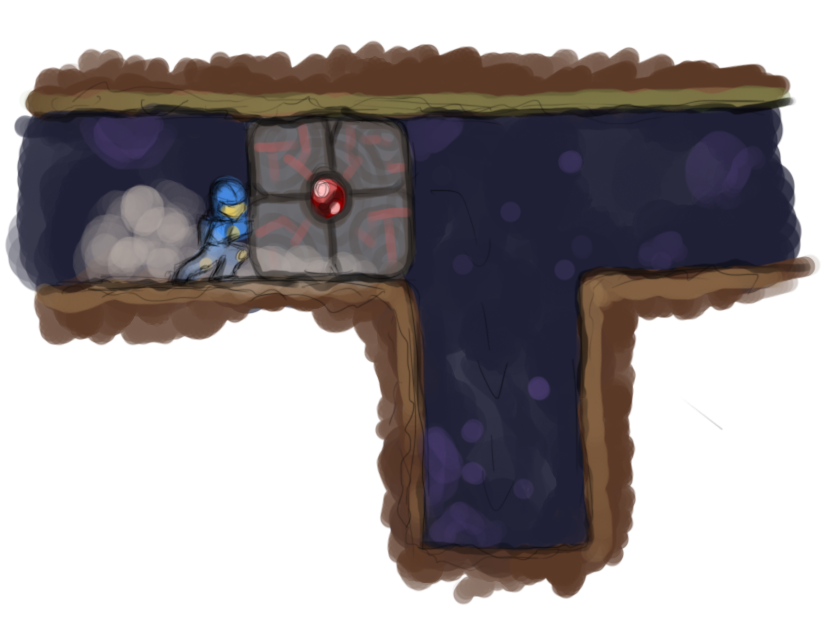 After that point, the player should feel comfortable experimenting different key presses, examining strange objects, and trying to progress using their brains. No hand holding. On top of this, upgrades might have multiple functions that serve the same purpose. Meaning while you can push the block, maybe there's another way the upgrade can be utilized to get rid of the block. This builds unique play styles and techniques. It also gives the "Whoa! I didn't know you can do that!" factor.

This is what made games like Blaster Master, Mega Man, Metroid, and many other games so satisfying- You might not know immediately what the item you pick up does, but you will learn as you go. That feeling after defeating Guts Man in Mega Man 1, and realizing you can now pick up blocks and throw them... Even further, finding out you can use Elec Man's ability to destroy those same blocks was a blast.

Play time is another important development consideration. I want the player to take their time to learn the game on their first play through. 9+ hours for their first run, less if they're accustomed to these kinds of games, or- An hour of less for people who are familiar with the game. Speed running is going to be encouraged.

I feel these aspects, coupled with tight, super responsive Mega Man style controls is what drives Surface. The ability to navigate using the tools your given that you learned how to use yourself makes for a really satisfying game.

Another important aspect to the game is the story, but not for the reasons most people would think. This isn't the type of game to shove the story down your throat and force you through it. Instead, the game's story will be completely "surface level". It doesn't need to be engrained into the gameplay. There will be only 3 instances where cut-scenes are utilized-

The Title Screen (on idle)
The Introduction
and finally, The Ending.
Classic games used the stage details and the manuals to tell stories. It allowed you to feel like you could use your imagination. I would like to tell a story with the areas in the game. Help put the puzzle together with each place you go, and then have the reveal at the end. Surface's story is simple, yet tragic enough to do this properly. There's no need to saturate the game with dialog and cut-scenes to tell the story.

Finally, I'd like to go into release details for this game. My plan for IndieCoinOp is simple- Make satisfying games, and make them cost a quarter. 25 cents to purchase the game. If you enjoy the game, we encourage people to pay what they feel it's worth beyond the 25 cents, but the minimum to have a digital DRM free copy of the game is just a quarter.

Surface will have a few options for distribution-
$0.25 for a digital DRM free copy
$8.00 for a custom USB drive with the game with some goodies on the drive.
and $25 for the custom USB drive (same as above) and a USB Snes Controller

I will also be accepting pre-orders on the game- that coupled with a valid email address will give the purchaser builds of the game released at each convention it's presented at as well as some other goodies leading up to the games release. This option will be made available in later on this month.

Hum , this project interests me a lot. Here a more technical question: what the game engine uses (SDL, Flash or Java)? Since your game supports GNU/Linux, it's an important question for me.
Cheers.

Blitzmax can build for Linux provided I'm running it off of the Linux platform-- I'm not entirely sure of the inner workings of the compiler between the platforms, but I do know it's a smooth process. The only thing that may be different between the Linux builds and the OSX/Windows builds is the sound engine.

Awesome.I'm a big fan of Metroid games,so presuming this will be played metroidvania style (Collecting abilities,backtracking,non-linear exploration) i'm definitely going to get this game.