Learn more about StarPicker in this interview by Skywilly from Game Side Story.

We met him at the Stunfest in 2015 , Jean-Rémi Tessier seemed to be very confident in making a smart scavenger hunt game which is far different from a guided Mirror’s Edge. The game follows his road, the development advances, in this occasion, the creator agreed to response to our questions...

Hello Jean-Rémi. Is it me or you will offer us a scavenger game?

Hi William! Yes we could say that StarPicker is a kind of scavenger hunt where the clues are the environment itself. The player needs some good observation and thinking skills to find his way and sometimes even to survive. To those who had experienced at school or in the army, the game is inspired from Orienteering.

What is your career path exactly?

I work as a freelancer for almost 10 years, as a graphic designer and illustrator I experienced in a variety of areas. When I met Emedion, with whom I published Maestria’s Flower, an interactive digital comic for iOS, I had the opportunity to go back to my passion for video game creation. Under the name of Emedion Games we then developed Gun Aces (not released), Beyond Perception and Bardadum: The Kingdom Roads. I have graduated from graphic design but I am also a musician and created soundtracks for all our projects excepted Beyond Perception. Then in the past years I started to learn programming, so I am able to create many prototypes. I felt like I finally had all the cards in hands to realize my projects and so I started to develop StarPicker. 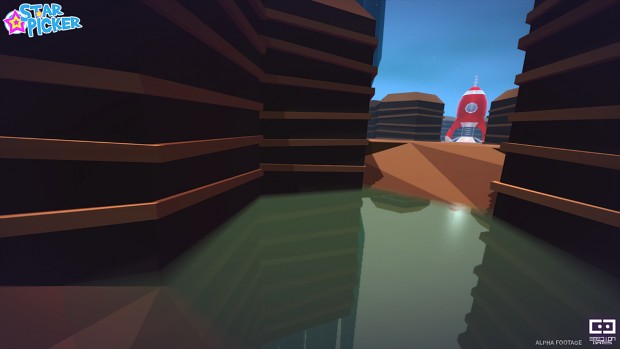 StarPicker sets in how many different environments?

The game sets in 5 different environments. I also took some time at the beginning to develop a quite modular level generator in order to make the environment creation easier. So the main story of StarPicker has 5 environments but I think I’ll propose DLC (charge or not, according to the audience feedback) after the release of the game. It’s possible that some presents new environments.

The different environments will be linked by storyline?

StarPicker tells a story about a complicated mission to accomplish during an unfamiliar journey where the player shall stay close to his teammates. That’s the storyline which leads the player to different land fragments in the space. Nevertheless each of these environments owns its own story. It goes from the logged forest to the desert witnessing the passing time, also to the mysterious abandoned city, to mention just a few. 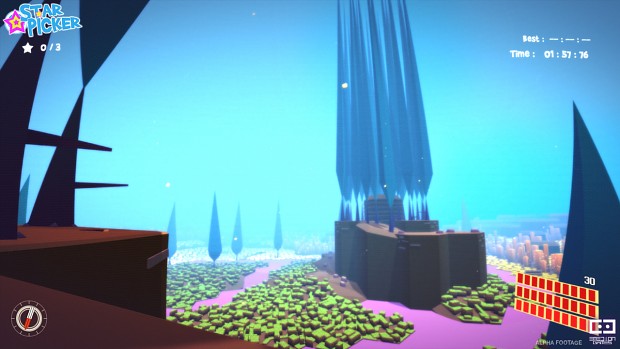 We have been presented StarPicker at the 2015 Stunfest. What did this public show bring to you?

The Stunfest was a very enriching experience! It is not only my first convention experience as a developer, but also the first opportunity for me to put my game into the hands of a wider audience. I learnt a lot about my game from the audience. For example, the family dimension has been kept intactly compare to the orienteering in real. The feedback of my audience really helped me to make crucial choices and to correct some mistakes as well. It was really important to pass this step while the game was still in the early stages of development, this can make sure the production goes in a good direction.

The Speedrun will obviously be the core of the game. How will it be set up?

Indeed the gameplay itself own a deep routing mechanic. This Speedrun dimension will be set in two parts.

The first part is the traditional Speedrun. They are the players who planned all their actions before the game starts, the plan can be based on a deep research of optimization over plenty of practices. All the wonderful performances are the perfect execution of the plan.

And the player can use the replay tool in the game to achieve his goals. After the run, he can watch his whole trajectory on the map with all the split times. And moreover the players can save their running data to watch and to compare simultaneously several ones. It’s the perfect tool to find the ideal route.

Second, there’s what I’d call the “Real Time Discovery Speedrun”. That means the player can only plan and react in real time according to the information on the map.

The game keeps a record of how many times that a player tried in a specific level. So he will need to make the best run on his first attempt! This kind of Speedrun corresponds, to me the best, to the Orienteering in reality. And I really would like to see people to try it. The “Real Time Discovery Speedrun” requires a lot of focus and can also deliver a good dose of adrenaline. 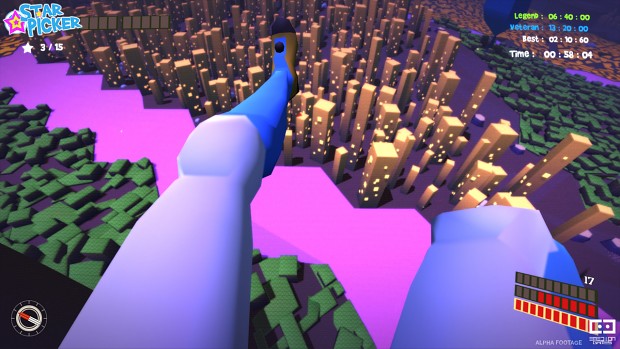 About the multiplayer, what will be proposed?

Initially, the multiplayer will be asynchronous. It means the players will be able to exchange their running data and compare them in the replay tool. A leaderboard will also be available.

I’d also like to create event maps to invite people to make a ”one shot” in the shortest time on a brand new map.

I really think the game will be successful in the e-sport when the community follows the concept. However, I’m not at this stage of production for the moment, so I will focus on the asynchronous multiplayer at first.

The music of the trailer is particularly catchy. We can expect this kind of rythm and style for the final game?

Yes exactly! It’s actualy the reason why I choose François Crocheteux for the soundtrack and I was happy that he accepted to work with me. The universe of StarPicker is 60’s-70’s inspired. The music and sounds from the science fiction movies of those years are then the common theme of the soundtrack. And François is particularly very talented in this genre.

Then each environment and each game mode owns a specific music so you can also find a variety from the calm, peaceful music to the faster, dynamic ones. 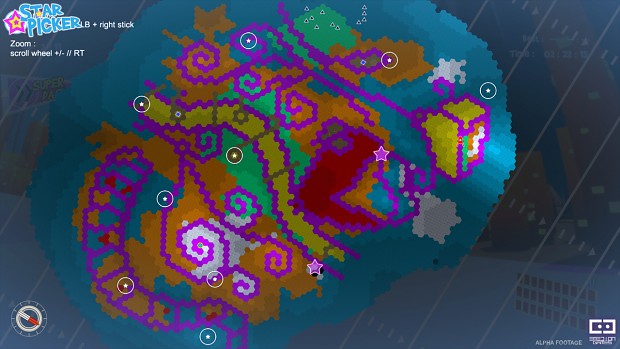 Based on navigation, the game tries to remind us of how to live without a GPS?

Yes I grew up practicing Orienteering. I’m almost born with a map and a compass in hands. I also know these two tools can scare a lot of people and they don’t seem to be very easy to use to the public. I’d like to prove them that anyone can be able to use a map to navigate. After all the human kind does it since millenniums!

I also use GPS sometimes but I think the experience of the journey is much more interesting when you live the path than just simply following arrows.

So thanks to my simplification (compares to the Orienteering in reality), the players can learn progressively how to use a map without even noticing it. Then after playing StarPicker, I’m convinced the players will be able to use a map and a compass properly in real life. And if I succeed to give them the desire to go into the forest to even practice my favorite sport then I’ll be very happy indeed.

What’s the difference between your game and a Mirror’s Edge?

Actually the example is very pertinent. Mirror’s Edge is without a doubt the closest game to StarPicker. And I watched carefully the evolution of the second Opus.

Mirror’s Edge is mainly an obstacle race driving the player by the visual marks. The path is linear and the stress of the menace from the followers is very effective.

The second Opus takes indeed the risk to propose more open environments in which we could expect to navigate. But in my opinion, it made mistakes by giving the player a map without any useful indices when the player would like to skip the GPS.

In StarPicker it’s exactly the opposite, there’s no GPS and the map is very precise, detailed, and quickly accessible, it won’t stop the player from progressing. The map is then the core of the gameplay. And moreover StarPicker doesn’t have any fighting sequences.

The game will be released on PC… We can expect an Early Access?

The Early Access is not an option that I planned at the beginning of the development, but I’m not against it. Actually I don’t want to give to the player a version of game which is different from the final product. So only an Early Access during which I can fix the last details can be considered.

Translated from french by Shiran Zhang from the original interview by Skywilly at Gamesidestory.com