Trusted by some of the best professional eSports players on the planet, the G810 Orion Spectrum from Logitech is a cutting edge mechanical keyboard built for accuracy and performance in games. Find out how upgrading to the G810 can directly improve your performance on the virtual battlefield.

If you're serious about games but you're still using the keyboard that came bundled with your PC, you're not getting the best performance in your games. You might not realize it, but most keyboards are slow and unresponsive, thanks to their inexpensive construction and the little rubber dome switches they use to register keystrokes. You could be losing precious milliseconds every time you press a key, and sometimes a few milliseconds are all it takes to lose the game.

They've been designed specifically to cope with the rigors of intense, high-speed gaming, with a shorter travel than standard mechanical switches. The result is that Romer-G switches actuate in just 1.5mm compared with 2mm for other mechanicals, and a sluggish 3.5mm for rubber domes. Add to that a low actuation force of 45g and you have a keyboard that's not only extra-responsive, it also helps minimize fatigue over long gaming sessions, so you can outplay and outlast the competition.

The G810 also boasts incredible customizable RGB lighting that you can use in conjunction with Logitech Gaming Software to light up only the keys you need for the specific game you're playing. That way you can be sure you'll always be able to hit the right command, even when you're playing with the lights out.

And there are more ways that Logitech Gaming Software can help you out. With it you can assign custom macros to the F1-F12 keys, enabling you to unleash complex special moves with a single keystroke, and in Game Mode you can switch off the keys you don't need, which is good news for anyone who's ever hit the Windows key in the middle of a firefight.

With such impeccable gaming credentials and best-in-class performance, it's no surprise that the Logitech G810 is the official gear of the ESL. But there's a lot more to it than that. It's also the ideal keyboard for everyday use. 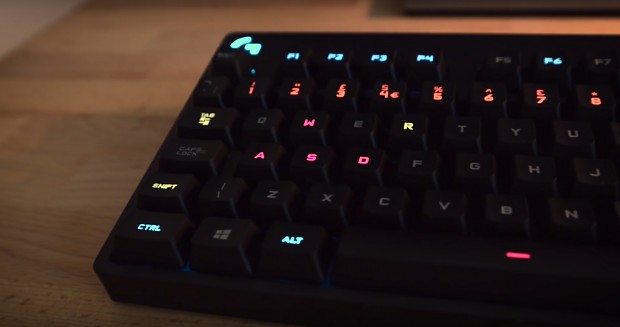 Because it's designed to be comfortable for extended gaming sessions, the G810's going to be a perfect fit on your desktop, whatever you use it for. Its asymmetric keycap design means that you get more reliable keystrokes, making it just the thing for fast, accurate typing, and its soft click switch design improves tactile feedback without deafening you. And with comfort in mind, its three-step angle adjustment allows you to set the keyboard to 0, 4 or 8 degrees so that you can find the perfect position for you.

Alongside its perfectly designed keys, the G810 also features a set of easy-access dedicated media controls that can be used to play, pause and mute music and video instantly. You can skip to the next track at the touch of a button, and you can even adjust the volume without having to reach for the speakers. You can simply use the roller instead.

Most importantly, the Logitech G810 is built to last. Its Romer-G switches are tested for 70 million keystrokes, making it 40 percent more durable than its top competitor, and you can count on it looking great for its entire lifetime, thanks to a matte surface texture that masks fingerprints, and even a braided cable that won't get tangled up in the wires around the back of your PC.

So while it's made for gamers, the Logitech G810 Orion Spectrum is an irresistible piece of kit for anyone who appreciates quality and good design, and right now is the ideal time to buy one.

Hey community, we are just testing out the occasional sponsored post, which we will always mark clearly. Sponsors are important for us to continue to grow so we appreciate their and your continued support.

Makes sense, as long as it's done with care so that it doesn't become overbearing. Thanks for caring enough to give us a heads up.

I don't know about this. Twitter does that and I hate it because every time I scroll through my timeline, it pops up without precedent, confuses me as to why I followed it, and then realize it's an ad. I hate it.

Maybe it's best if you pin it to the top so that way we can get it out of the way.

Ah, hell yeah gonna buy one of those someday. IT'S FREAKIN' AWESOME! ^_^

Damn this keyboard does look amazing!