Space Salvager is coming to Indie Game Stand with some exclusive content and we need your opinion on what content that's going to be!

So Space Salvager is coming to Indie Game Stand soon, not sure when exactly when some time in the next two or three weeks that doesn’t clash with Gameolith or Desura. As part of that I’m sorting some exclusive content, which in this case will be a new starting ship option. Below shows the current concepts, being developed by a friend of mine from University: Mair Perkins.

The standard starting ship is the United Earth Space Authority Alpha 2, an old ship design from back in the day when Nyr Heim was still in contact with Sol. This new starter ship, continuing the theme of beat-up wrecks and “Space Salvager” in general is a cheap revamp of an old design ship design by the Àlf Recycling Collective: the ARC 110. 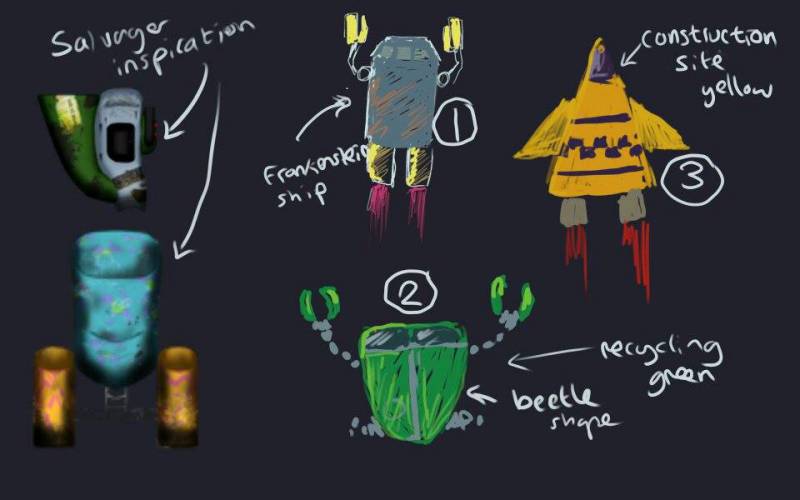 On the left you’ve got the ARC 230 and 240, on the right you’ve got three designs for the new ship. Personally I am torn between one and three. Although one borrows it’s shape a lot from the ARC 240 it’s a nice twist on the design and looks quite nice as a starting the ship; whereas three has a very different design from other ships entirely, it still has that ARC feeling to it, but contrasts nicely with any other design of a ship in game, see here.

As with tradition for me, I’m going to ask you your opinion and to vote! Tell your friends and your friends friends. I want peoples opinions.