We reveal our upcoming strategy title Skyward Collapse, launching this May. Beta planned for later this month.

Purely by coincidence, it's been exactly two weeks since we did our first teaser for our upcoming game Exodus of the Machine. But did you know we're actually working on two new titles at the moment?

Our second upcoming game is called Skyward Collapse, and it's just now reaching a point where we're ready to show our first screenshot of it. Aside from overlaying the logo in the lower left corner, this is exactly how the current build of the game looks as of about 10 minutes ago: 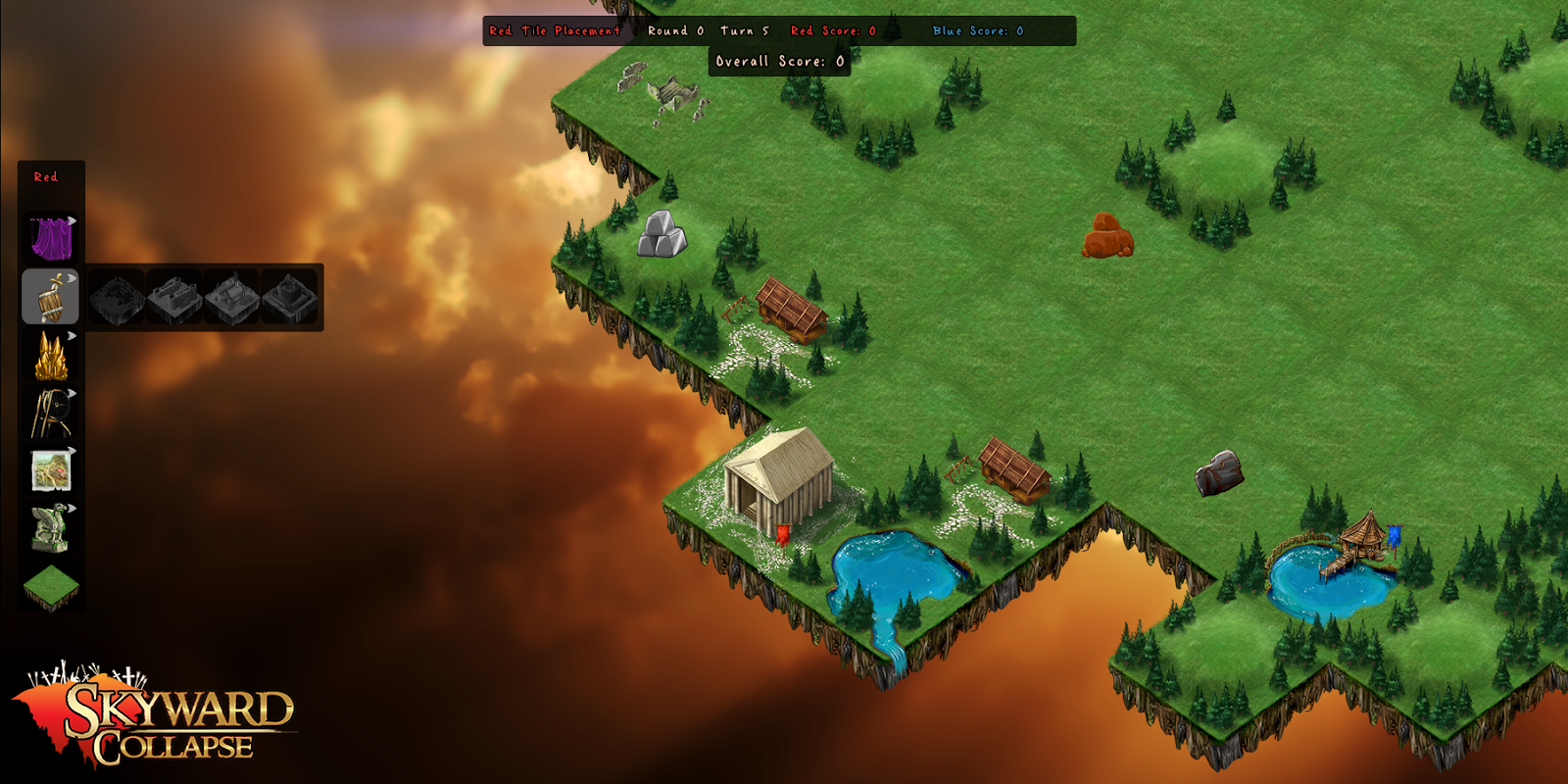 So just what is Skyward Collapse? It's a turn-based 4x simulation god-game.

Overall Gameplay
Set high in the sky atop a floating landmass that you are actively constructing as the game progresses, you oversee two warring factions (Greeks and Norse). Via solo play or co-op, you play as "The Creator," helping both sides of the conflict -- granting each side buildings, resources, and even new citizens.

However, the multitude of villages you create all have minds of their own, and will actively try to stomp the nearest still-standing village of the other faction. Given the resources and appropriate buildings, your villagers will gear up for war without your direct interaction, and will fight it out to the best of their abilities.

Unlike most strategy games, your goal isn't to win. "You" aren't represented by either of the sides, after all. Instead your goal is to balance this conflict as best you can so that neither side gets wiped out.

But you can't just strip them of the ability to gear up for war: roaming bandits make defense essential. Not to mention, crime in each village goes up and up the longer it's without a military presence, until it collapses into anarchy. You can construct embassies and assign traveling diplomats to them in an effort to reach a state of enlightenment where crime is no longer a threat, but this is difficult and only affects the two villages that are undergoing peace talks; their neighbors will remain as warlike as ever!

Game Structure And Objectives
Gameplay takes place over three rounds (with a brief setup round occurring prior to that), each with a fixed number of turns that you can choose when you start the game. During the time before your game ends, the goal is to get the highest possible score: your overall score is based on the lowest score of the two factions, so again keeping them in balance is key.

As you play, you'll also be trying to complete various meta-missions to increase your personal rank. Every 10 missions you complete, you unlock not only the next rank, but also a new building for your towns!

Units, Economy, and Mythology
Oh, did I mention mythology yet? Looks like not. During the first round of the game, it's mostly just you and your villagers. You can also directly summon certain powerful mythological creatures like minotaurs or the midgard serpent and so on, but these cost a lot of specialized resources that it takes a while to build up.

In round 2, you get to choose a Lesser God for each of the two factions. Hermes, Idunn, etc. Which one you choose out of your four options (per faction) has a big impact on how the rest of the game plays out. Then when round 3 starts, you get to choose a Greater God to go along with them. Zeus, Thor, and so on. There's four choices per side here, too.

All in all the economic and military options are what you'd expect for a simulation game, but it's also probably our most streamlined game ever. Easy to pick up, but there are already some really tricky advanced strategies that we've been coming up with.

Advanced Strategy Example
As one example of an advanced strategy: normally you can't control what units are being produced at, say, a barracks. There are four units that get created in rotation at the barracks, archery ranges, and siege workshops (four per building, all unique per side, I mean).

So there's no control there for you: presuming that the resources are in place for the next unit in the rotation, it just creates that unit. For a novice player, there's nothing here to think about, and it's all very simple. The barracks do what the barracks do.

However, the tricky part is that if you don't have the resources for the next unit in the rotation, then it keeps checking the other potential units in the queue until it finds one that it can create. Do you see the trick now?

I suppose I also now need to mention that there are a lot of resources in the game. Both "raw resources" which are collected and stored globally per faction, and then "finished goods" that are created on-demand by specialist craftsmen in an individual village. Pigs are a good example of a raw resource, whereas bacon is a finished good.

Currently there are 15 raw resources, and 11 finished goods. We're still polishing the exact mix of all those, though, so that may increase slightly by the time beta starts. If that sounds overwhelming, it's not: the resources all have clearly-defined straightforward ways of being produced, and clearly-defined ways of being used. Mostly your choice of how you gather and refine resources boils down to what you're trying to accomplish for a given faction or a specific village. The resource production pipeline is actually one of your primary ways of exerting indirect control over your factions.

See the advanced strategy now? Each unit at a military training facility has at least one resource that is unique to it, as well as some that are common to all of the units in that facility. Therefore, you can control what units get produced in the rotation based on which finished goods you make available to that village. Even better, you can figure out ways to manage the resources such that there are synergies between the different training facilities in a single village.

Other Things
Let's see, there are trading posts with a pretty straightforward trader model (but your traders are at risk of being attacked as they travel, which is what makes it interesting). There are the aforementioned embassies. There are three levels of schools to buff units in the towns containing those schools. There is an (non-visual) upgrade model for all buildings and units.

You can place dozens of "special tokens" that are either general-mythological or specific-god-related. You can smite land tiles, or make "military commandments" that gives some overriding orders to all the units of one faction (so that's a pretty big broadsword to be used carefully).

And there's some other stuff too, but this hits most of the high points from a broad level. We're quite excited to be sharing this with you soon -- hopefully beta will be starting before the end of April, with a 1.0 in May! When we hit beta we'll have everything in place and it will mostly be a matter of balance.

Interested in more discussion on the game? Join us on the forums!

That sounds and looks very well. I would be much interested in short video preview :)