The latest update for Skyward Collapse is absolutely gigantic, adding five groups of new features and lots of other smaller (awesome) stuff.

This one has... quite a lot going on, as you can no doubt surmise from my tongue-in-cheek title for it. Though the title isn't really an exaggeration, either. This release has five groups of new features that would each be considered a pretty substantial change on its own, and then a myriad of other smaller awesome stuff.

It's been almost two freaking weeks since our last update, crazy as that might sound to people who know Arcen. So no wonder this is giant.

TLDR of the rest of this post: it's a good idea to read the release notes on this one, although even if you don't most things will become pretty clear pretty soon in the game itself. Anyhow, the groups of new things:

Group 1: Scoring System Improvements
Before, the score was linear. You had a goal for score in each of the three ages, and things gave you a fixed amount of points no matter what point in the game you were in, and that was that. This was all well and good... except that it meant you could "work ahead" on the goal for one age while still in the prior age. The problem there was that this could make the Age of Gods a lot less tense if you did well in the earlier ages.

The new system makes the score gates and the score granted from each action go up 3x in the second age, and 8x in the third age. This means that most of the points for the score gate of the Age of Gods now have to actually be generated in that age.

Offsetting this a bit is a new change where the deaths of your higher-level units (those that have been upgraded) are now worth more than those of level 1 units. So this helps makes your scramble in the third age less than it otherwise would be. It might also make the gate for the earlier ages too easy, but we'll see and will adjust as needed. 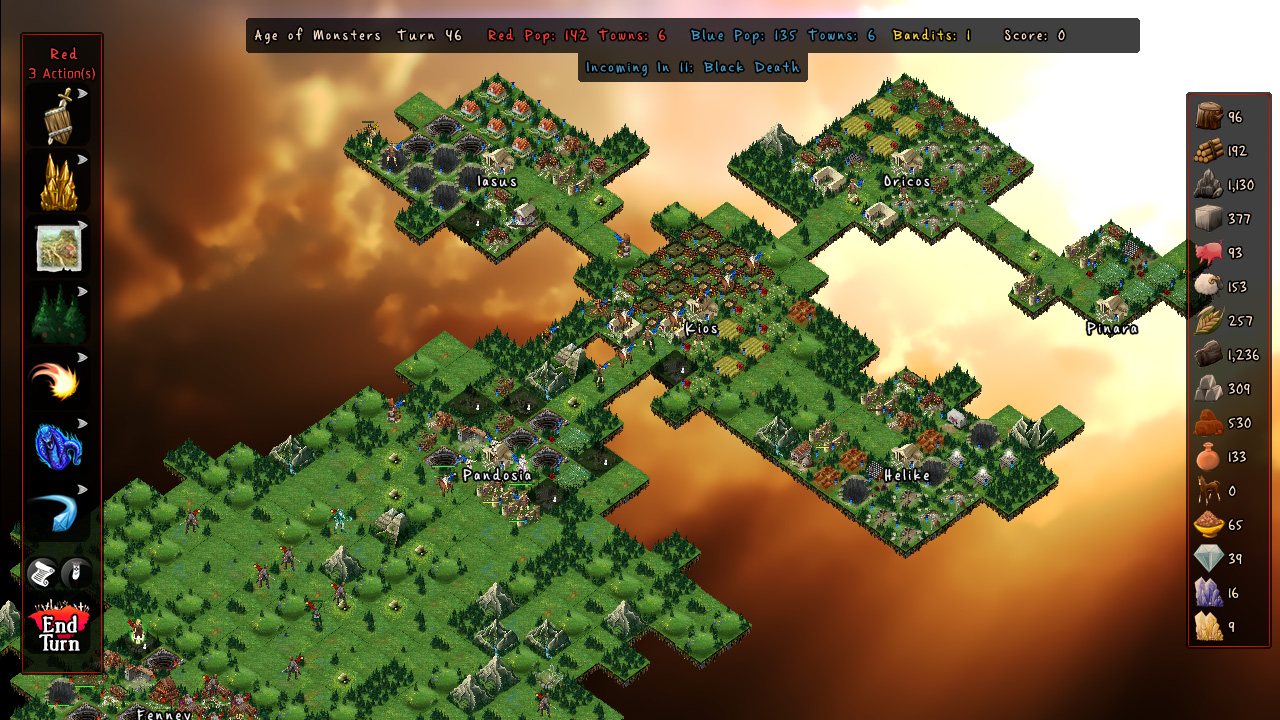 Group 2: Eleven New Unique Human Units For Bandits
Eleven new units! Holy smokes, right? All of the bandit human units are now completely unique to the bandits, and this makes them able to be a lot more specialized in playing against the player.

Two of the new units in particular stand out in that regard: the siege drill and the field mechanik. These are able to burrow paths through mountains and build bridges over lakes, respectively. This solves the cheese of just putting up mountains and lakes as a too-easy defense against bandits and the other side and so forth. Once these bandit units come by, then any other unit can follow after; and you can't just replace or smite away the tiles they left behind, either.

However, this doesn't just nerf the cheese strategy away: it actually makes it a valid one. Now you can build progressive rings of mountains if you want; starting with just one, and then building more as you are losing inner rings. You an also be sure to kill those drills and mechaniks early in order to prevent them getting through your defenses at all. And you can also "bless" the tiles to return them to an un-messed-with state using the new souls resource (see group 5, below).

In other words, what was previously a cheese strategy now becomes a real strategy with back-and-forth pull between you and the bandits.

The rest of the bandits are less spectacular, but they provide some welcome different art from the main factions, as well as a better balance in general. In other words, because they are specific to the bandits, you're getting a better-tuned mix of types of units rather than when it was pulling from the much larger pool from all the factions.

Group 3: Limited Unit Stacking
The main thing here is that siege units can stack with one regular unit that it is allied with. This lets siege units pass regular units, and vice-versa. This is huge! This prevents traffic jams with siege units, and makes things like trojan horses and battering rams way more effective.

The secondary thing here is that if two units are stacked in general, they will move to the sides so that you can see them both. Thus if somehow two units are sharing a tile in some other way (they are not supposed to be able to do that, though), then at least it won't look wrong. 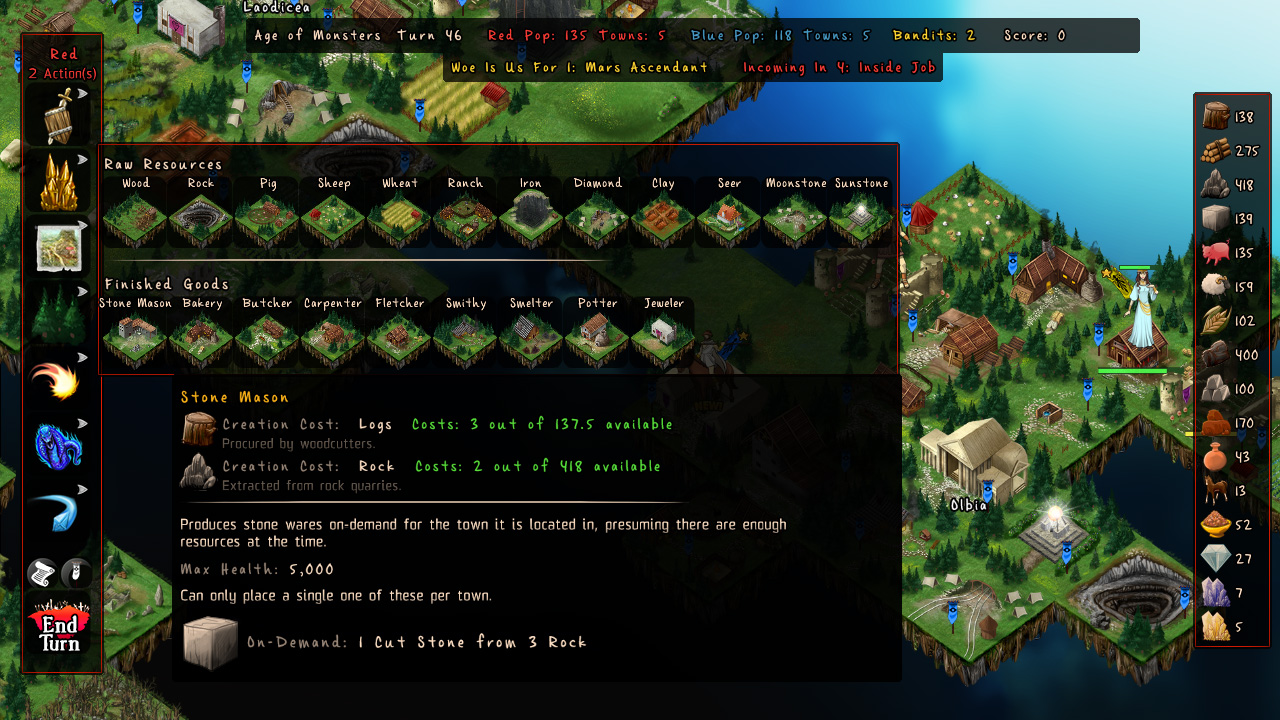 Group 4: Unit Leveling-Related Improvements
First of all, on-map visuals of telling if a unit has been leveled up or not are now in place. This is a really big deal in terms of telling how the battle is playing out, and if your guys are a match for the opposing force, etc. Previously you had to do a lot of tooltip hovering to figure this out.

Secondly, mythological creatures you place are no longer auto-leveled up in the latter two ages. This was making them way too powerful compared to their human counterparts. Previously there was confusion as to why your minotaur would get trashed by a bandit minotaur in a later age, but now with showing the levels of units that's no longer a potential concern.

The other big thing here is that now the upgrade-unit direct action costs you zero AP. This means that there is not an opportunity cost in terms of actions take in order to upgrade units -- that's important. There is only a resource cost. This in turn will help to keep late-game resource stores from getting stupidly huge, which is a big plus.

A small but important thing has also been added to the tooltips for the unit-upgrade action and some other direct actions: a note that you can hold shift to do multiple upgrades (or the other actions) at a time. This works with any action or unit/tile placement off the left sidebar, but a lot of people didn't know that!

Group 5: New Soul Imprints Resource
I'm excited about this one, as it not only is useful now but adds some new flexibility for later additions.

Anyhow, there's this new resource called Soul Imprints. The only way to collect this is by having your human units or buildings die. Each time one does, you get one soul in return for your faction.

Souls show up in your right sidebar and so forth just like any other raw resource. Right now there are only two abilities that use souls, but we may well add others later that do. That's what I meant about being excited for future additions with this. It's a whole new style of resource collection.

Anyway, the first of the new abilities you have is called Bless Tile. This is a powerful (but expensive in soul imprints) way to turn certain undesirable tiles back into something that you can build on again. You can get rid of onyx, lake bridges, mountain tunnels, and former building ruins (provided those ruins are in a town that is still alive, not out in the wilderness somewhere). The strategic options this opens up are nontrivial, but also are strongly constrained by how much death (or lack of death) there has been among your human populace.

The second new ability is called Convert Unit, and it's even more expensive. It causes any enemy unit to decide to join your faction, though, which is really useful. This lets you correct or adjust all kinds of things... but only pretty infrequently. It's another tool in your belt, but it's more of an ace in the hole than something you're doing constantly.

And when things get rough, of course we all want aces in the hole! The tricky thing is knowing when and where to spend those soul imprints, and if you can afford to bless some tiles or if you really need to hang onto them for doing a unit conversion. :) 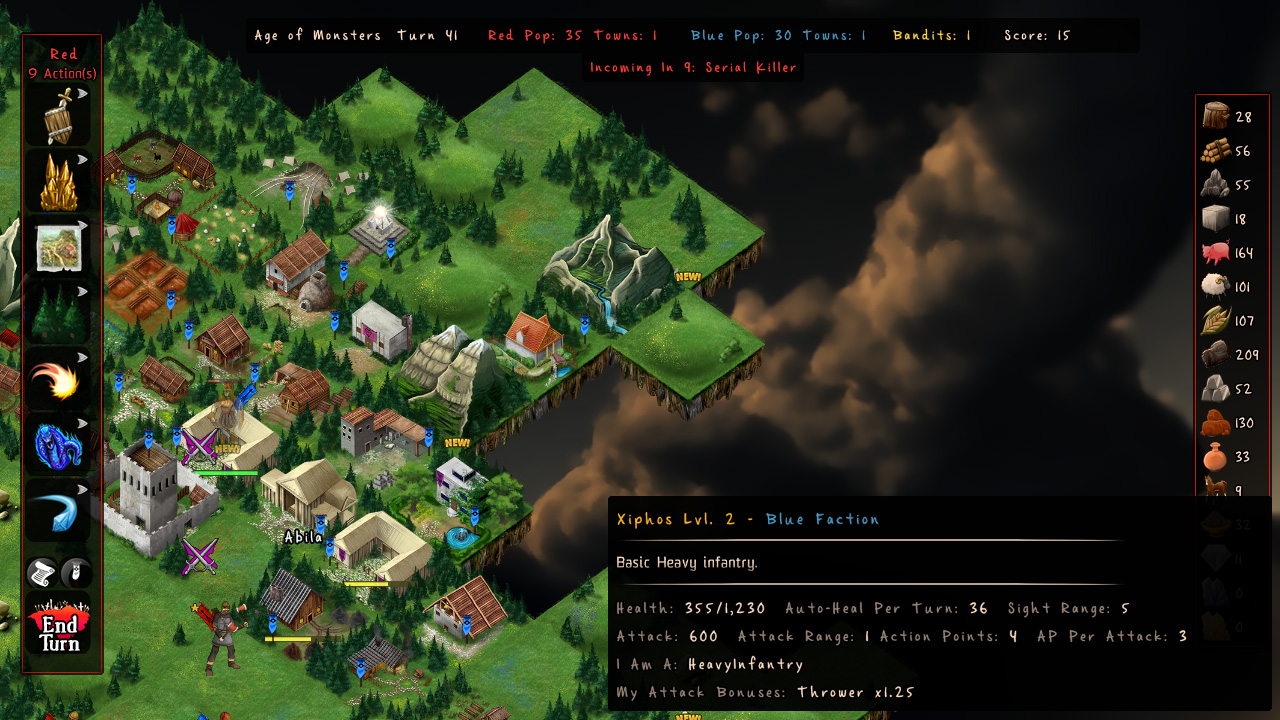 Miscellany
There's a bunch of other stuff, too.

- Military commandments now work properly again.
- The filters on the sidebar now work as a pop-out rather than cycling through.
- A new filter on the sidebar lets you see just tokens, which is really useful.
- Beacons now let you mark places on the map for talking with allies or for later recall.
- The marsh graphics are now way more attractive and not repetitive.
- And various other things!

Skyward Collapse: Nihon no mura
All of the updates in this release are part of what we are working toward for our big 2.0 version of Skyward Collapse. This one 1.008 version takes us a ton of leaps and bounds toward 2.0, actually, but there's still more to come. All free updates, and definitely exciting stuff.

Alongside the free updates, we're working on the first paid expansion for the game, as well. This will be called Skyward Collapse: Nihon no mura. It adds a new Japanese faction, as well as hamlets.

The Japanese faction is really exciting because they work so differently from a fundamental premise. They have fewer human units, but more mythological ones. Their gods have no direct powers and don't stand around passively, but instead wander around causing trouble -- and summoning mythological creatures unique to them. Rather than three powers per god, it's three unique creatures. Very different from the Norse and Greeks!

The design for hamlets is still ongoing, but I'm really excited about how this will extend the game into a civilian direction that can be played alongside the main military showdown. Lots of things on this still need to be fleshed out, and then lots of playtesting needs to happen before those ideas are truly honed. But we're expecting to hit public beta for the expansion in July, and then do our full 2.0 release alongside the expansion in early August. 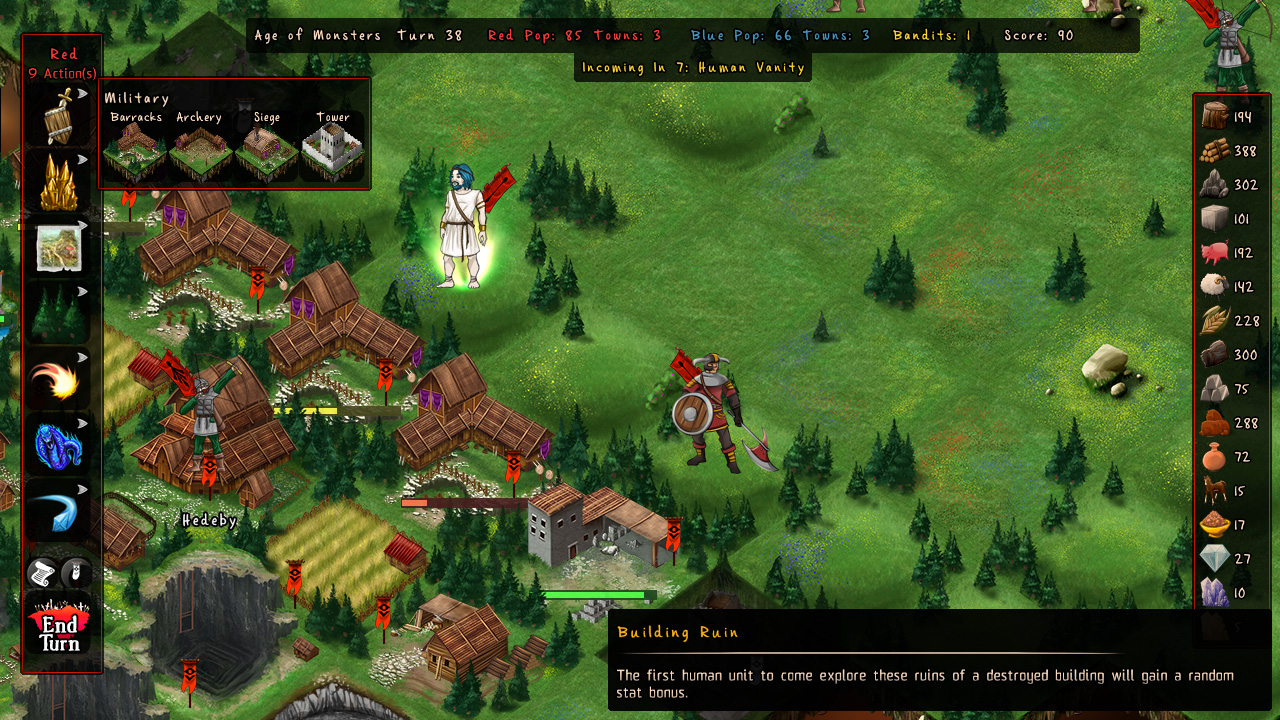 UPDATE: As with any release of this scale, I guess we can't escape a few bugs that went unnoticed. The 1.009 fix is out now for the ones reported. Sorry about that!