The dark side of AudioBrush is begins to light up with the event of a new member!

Server development was planned today and whilst my input was most definitely not vast, Mr. Parsons sounded like he knew what he was talking about.

BETA Testers will know that there currently is a back-end system which hosts the scores and user data, but it's nowhere near big enough to handle a public audience.

This is where Jon Parsons has stepped in, he will be mongo-ing the databases and node-ifying the server stacks. Mr. Parsons and I had quite an interesting up-bringing into the gaming industry, we worked together after he successfully passed my employment interview, from which point it was a long and epic battle of client vs. server sided arguments. Every work day was a vocal battle of who was right and wrong, however a trip to the pub after a long day usually settled the waters.

Many years have now passed and I must say, as much as it pains me to say it, I do trust his judgement, so I say good luck JP.

I managed to dig out a photo of us both during a visit to Tiger bar in Amsterdam, I'm pretty sure we're mid argument... 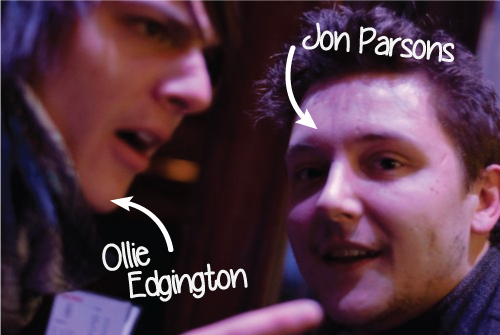