A post about writing dialogue for Luminesca while maintaining concision and ambiguity.

My primary focus over the last week or so has been story and exposition. I've put a lot of thought into the kind of world Luminesca takes place in and what its denizens think about it. In fact, conveying these ideas is one of the primary reasons I'm making Luminesca at all. It's a project with which I want to say something and there are specific messages that drive everything in the game. The current build merely hints at these underlying messages, so I'm developing them further for the next update.

Ever since playing Ico, and seeing Fumito Ueda's efforts to strip out many of the superfluous elements that have seeped into convention in modern games, I have understood the value of minimalism in game design. This design by reduction approach is applied to Ico's story exposition and the result is a game that drip-feeds just enough ambiguous plot detail for the player to grasp what is going on without resorting to heavy-handed verbosity. It is this level of elegance that I want to achieve in Luminesca.

I've long believed that video games are at their most elegant when they convey their core ideas via interactive systems, so at first I was averse to using text. I was adamant that I could communicate all my ideas through interaction and imagery alone. I've come to realise that certain ideas are best expressed with words, strung together by a loose interactive framework, but to avoid the aforementioned verbosity trap I've restricted myself to a very simple dialogue box system (shown below). 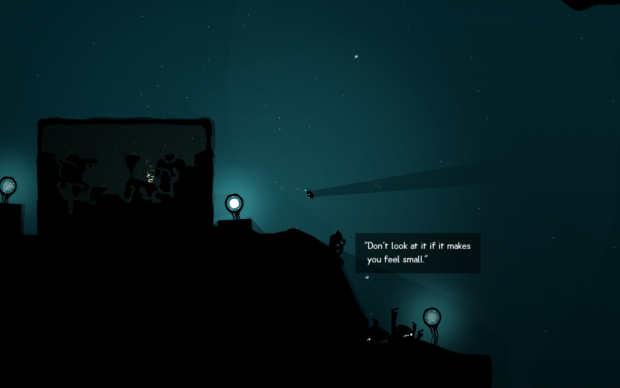 These dialogue boxes pop up when the player approaches another character, and disappear again when they move away. They can be displayed repeatedly in case they were missed the first time, and the player is still free to move around, unhindered, while they are being displayed.

While this maintains a lot of flexibility in the player's experience, this is actually a very inflexible system from a development point of view (the text boxes are a fixed width and do not support multiple pages). I've built them that way for two reasons: firstly, it is technically more simple to implement but, more importantly, it forces me to condense my writing into smaller chunks. These small snippets of characterisation tend towards quick adsorption by the player, which is crucial if you want to attract their attention and discourage them from skipping through lengthy dialogue.

But this is not the only advantage of concise writing. There is a gap between what stories say and what the audience hears. The more a game withholds such information, the more players must step forward to bridge the gap with their imagination and personal reflection. Players must engage with the text if they want to make sense of what's going on, rather than just sitting back to be spoon-fed messages. Will players want to make sense of it? I hope so, as this desire ties closely into the central themes of the game.

So what are these messages in Luminesca I've been referring to? You'll have to play (and read) the finished game to find out, or pre-order now on Desura get a sneak peak of it in development!

I like how Amanita Design use symbols/pictures to convey conversation and characterisation. Though, I guess that's more a function of puzzle design then what're you're going for, which seems to be more focused on characterisation and storytelling? If anything I would like to see the speech bubbles redesigned to fit into the overall aesthetic of the world you've created.

Yes, Machinarium in particular used them very well. There are specific aspects of the way we use language which are not conveyed in pictures though. For example, the way words can have more than one meaning, or the way sometimes we use certain phrases without thinking about what they really mean.

Also, Machinarium had quite simple character relationships. That's not a criticism - it works very well for the story they're telling - but Luminesca looks at more complex themes and relationships which are more difficult to convey in illustrations.

Thanks for the feedback on the speech bubbles! They're fairly consistent with some of the other GUI elements but that's not to say the whole lot couldn't be rethought. It is a first pass though, so I'll certainly bear your thoughts in mind when I come to polish them up later on!

You can remove the quotation marks and period. They are superfluous.

Once upon a time, Shakespeare wrote that brevity is the soul of wit. You could rewrite that line of dialogue as: Intimidated? Then don't look at it

The visual design and storytelling of luminesca reminds me of a flash game called soap bubble (and it's sequel). The environment itself tells the story as you play the game.

I agree about the quotation marks marks, but the full stop is a formatting decision. I think I'd prefer to keep it.

I appreciate your input but I have to point out that the example you gave is, I believe, inaccurate. "Feeling small" is not the same as being intimidated. The latter implies an element of aggression or domination while the former is more a case of being overwhelmed by a contrast in scale. That's the idea I was trying to convey with that particular line (in reference to the map).

It's a work in progress though, as I'm sure you know, so there's definitely an opportunity for revision. If you have any other thoughts I'd be happy to discuss them. Thanks!