Music! It's a part of most games. In this post, we'll talk about the system behind our music, and how we've created it to fit the relaxed style of Saganista.

As this IS the first news post we make for this game, I was thinking we should have a short introduction of what it is about:
"Saganista" is a simple game about a star-spirit who flies around in space and connects stars, turning them into constellations.
The game is focused on being simple enough for a child to understand and enjoy it, but at the same time also having visuals, atmosphere and relaxing game-play that will make the game interesting for older players as well.

Those are the very basics of it, at least. We will explain more in detail on other posts that concern other fields, so for now, we'll move right on to the main part of this post:

As explained earlier, Saganista has a focus on atmosphere and simplicity. In order to get the right stopsphere, and to encourage the player to explore the different solar-systems, we created a special music-system for the game. The system allows for dynamic layers that will fade in and out depending on the players position relative to the objects in the level.

By doing this, we achieve three things:
An interactive music system that changes the music depending on the player.
A wish for exploration: Players fly around to different objects in the space in order to hear what the music sounds there.
Characteristic objects objects in the space, that has both visual and audio features that differentiate them from each-other, making the player feel that the planets, suns, nebulae and asteroids are more then simple shapes flying around in space.

The system is actually very easy to understand. There is one track, a bass track, that represents the space, that will always be playing as a base for all of the other layers to play upon.
On top of that track, each object in the space it's own layer in the music. This layer has a maximum and a minimum distance, where the fade in starts at the max distance and is at full volume inside the min distance.
In the space, there are basically four kinds of objects: Planets, Suns, Asteroids and Nebulae. Each kind of object has at least a few different models, and each different model has its own music layer. 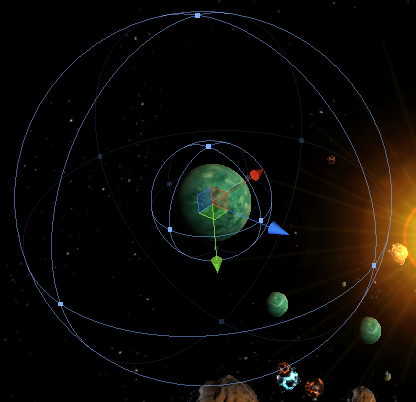 In order to give us more flexibility, we have used Unitys 3D sound graph to customize how each layer works to our liking. It has allowed us to make fine adjustments in order to make sure that the music sounds exactly as we want where ever the player is. For you who haven't used Unity, here's how it looks: 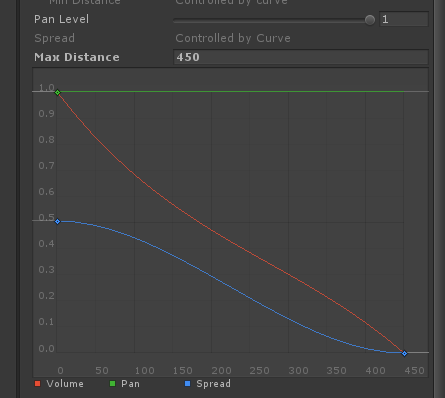 The vertical line is the value. For an example, for volume, the value decides how loud the layer should be. The horizontal line is the players distance relative to the object in question.
As you can see here, we let the music fade in as soon as it gets to the max distance. We have given this planet a small slope at the end in order for us to hear better when we enter that planets max distance. There's a big chance that that slope won't be there in the final version. We have also given it a slope at the end, so that when you get close to it, the volume gets much louder. This helps giving the feeling that the player is close to the object.
The spread (blue line) is what controls how much the layer will pan to the sides. If the spread is at zero, the pan will be 100%. This means that if you for an example have a planet straight to your right, you will only hear it on the right speaker, no matter how close you are to it. This is of course a problem, as if you are reeeaally close to something, chances are that you'll hear some of it on your other ear as well, no matter where you are turned. However, even if it's a bit unrealistic, when you are far from something (and therefor its volume is low) it sounds better if you can only hear it on one of your ears. It also helps orientation. Because of this, we have given the spread graph the slope it has.

When it comes to the music itself we've gone for a soothing and atmopsheric style. We have focused on using pads and less rythmic instruments with a lot of attack, in order to make the music fit the decently slow pace of the game. We've also made sure that the music follows the theme of each level (The potrayal of each level's constellation is what decides the theme), making each level sound different, but keep the same relaxed feeling. Each constellation also has its on theme melody, that playes once the stars have been connected. The melody contains as many notes as there are stars in the constellation (i e if there's four stars in the constellation, there are four notes in the melody), and foolows the theme of the level.

Here's an example of the music for the first level (With the theme "Tree/life"):

Well then, that's all for today! Expect some more updates and/or videos from us musicians and the other fields in the future!