This is just a little something to appease those who only look at my dev logs for pictures. The floor tiles are temporary as they aren't done originally, they're ripped from a GBA game right now. It's just a test for the future Syndicate/Missing Ninja main hide away. There will be such tunnels, and a very large "underworld". 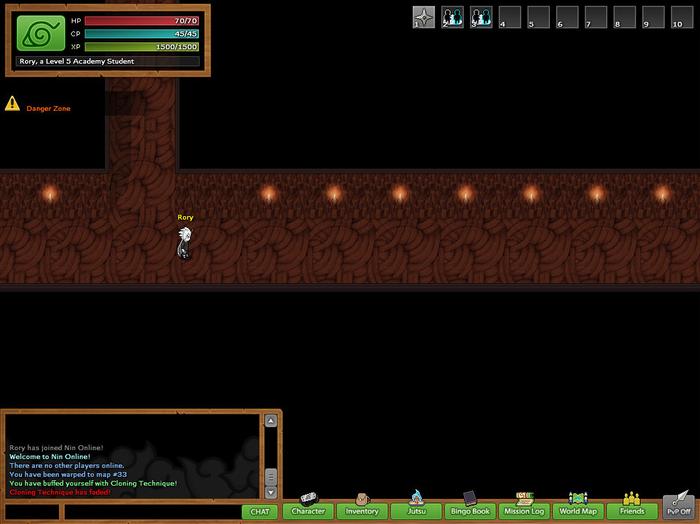 This is just a little something to appease those who only look at my dev logs for pictures. The floor tiles are temporary as they aren't done originally, they're ripped from a GBA game right now. It's just a test for the future Syndicate/Missing Ninja main hide away. There will be such tunnels, and a very large "underworld".

Talking about Missing Ninja. For those who have wondered about how this will work, you're in for a treat.

Note: Everything I write here is subject to change.

Soon after we have a stable village structure for the Leaf Village, we will expand into working on a Faction system that will pave the way for more villages following the Leaf Village as a successful formula. Each of this village (including Missing Ninjas as a collective village) will be placed into a Faction.
Factions can either be Allies or Enemies.

Village Leaders aka. Kage will be in-charge of deciding which Villages are allied and which are enemies.
These decisions will be made through Game Masters, and from that point on, the villages Ninjas will be either..

Allies PvP (button) must be enabled to attack them, sort of like a Friendly Fire toggle. Enemies Open PvP anywhere, anytime.

Concealing your identity makes yourself a "Ally" temporarily to everyone. As other Ninjas do not know you true identity, they cannot simply attack you anywhere. However, if they suspect you are an enemy, they may toggle PvP and attack you.

Missing Ninjas will always been Open PvP, unless they have concealed their identities.

After a stable village game play is complete with enough content to satisfy players. We will work on the following in order.

What comes after this in terms of factions is not planned and is up for healthy discussion!

We are very aware that the combat system is generally lacking. It is far from complete and we will be working on it when we have a server capable of handling our player base, stable enough for the long term. There will be many more Jutsus for all the elements, and even Jutsus for Medical, Taijutsu and Bukijutsu (weapon) ninjas.

Combat is still undergoing a lot of planning, but we will aim to create it to be as fun as possible.
It will be heavily based on Tactic, Skill and Build.

We have been getting a lot of Jutsu work from @Kimi and we're thankful!

While most of the community has been very understanding about the delay, I'd still like to address this.
We're really sorry if our lack of foresight has caused any trouble to anyone!

We have gained valuable information from each test, no matter how short, and we spend hours a day fixing it.
@Seth and @Dawid R have been working extremely hard to bring the game a stable release.