From The Controller Online: Xbox Live Indie Spotlight. Silver Dollar Games’ return is triumphant as One Finger Death Punch is one of the most purely fun and satisfying games on the XBLIG channel.

Posted by SilverDollarGames on Jun 29th, 2013

DESTROY YOUR ENEMIES BY PRESSING X AND B

We’ve been waiting quite a while for Silver Dollar Games latest effort, as it’s been a long time since we had a dose of their particular brand of Indie madness, but today One Finger Death Punch is finally here. That’s right, the studio that brought you such classics as Who’s The Daddy 2, Try Not to Fart, Jump Hero, and Office Affairs, are back with a vengeance. The kind of vengeance that can only be solved by kicking and punching. Kung-fu kicking and punching.Following Silver Dollar’s philosophy that “everything’s a game”, One Finger Death Punch is a Kung-fu movie in the form of an indie brawler game. Only, this isn’t like any brawler you’ve ever seen in that it only uses two buttons on the controller. You heard me; two buttons, no joysticks, no triggers, just action.Players will control a stick figure, ripped straight from a “Caution: Wet Floor” sign, who has been thrown into a world where bad guys rush the hero single-file to receive their beating. The backgrounds feature the same type of scenery you would see in an old Kung-fu movie, and are peppered with breakable objects. As the enemies, who are stick figures themselves, come in from the right or left of the screen, players will have to hit either the X or the B button on the controller to deliver that one finishing blow that Kung-fu seems to be centered around (if I’ve learned it correctly from watching the movies). 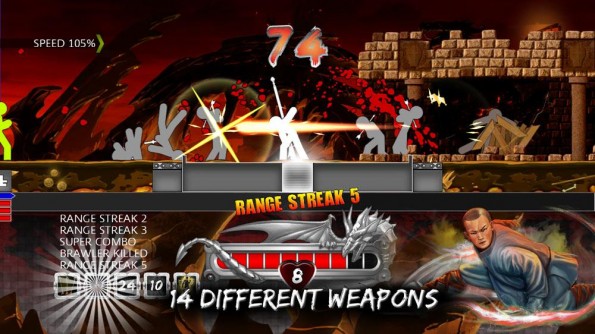 Of course, as is pointed out many times by the game and its narrator, button mashing will get you killed. You are only able to attack enemies who are within your range and striking too early will result in a ‘miss’ will leave you open for an attack. Hitting a huge combo is what you’re going to want to shoot for, not only to survive and achieve a gold medal for the round but to feel the satisfaction that this simple game can so easily dish out. This sense of accomplishment is made even greater when you grab a weapon and start really doing some damage.As you complete stages, you’ll move through an extensive world map that allows you to choose multiple branching paths for a different experience each time. Enemies will also become more complex with some taking multiple hits to finish off and others being able to dodge your attacks and slip to the other side of the screen. A two button game may sound boring, however One Finger Death Punch is anything but. 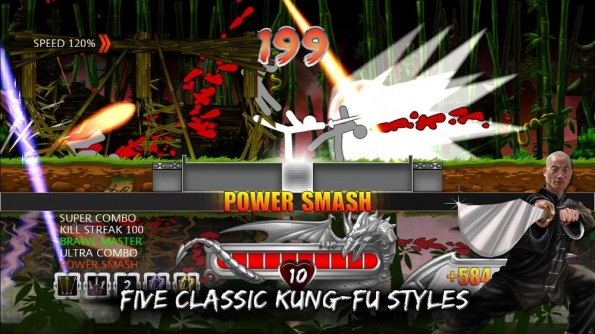 Once you’ve played through the levels in the main campaign you can jump over to Survival mode which pits you against an endless string of enemies, truly testing your skills in one crazy battle that can have you racking up some ridiculous combos.Silver Dollar Games’ return is triumphant as One Finger Death Punch is one of the most purely fun and satisfying games on the XBLIG channel. Go grab it now, for one dollar.