There is a first official release of the game, featuring some cool new stuff!

Posted by coffeemuggames on Jan 2nd, 2013

It has been some time since the last update on the game, but I did not stop working on it :)
So here it is, the first official full version release of 'I, Mayor' - have fun!

There are a lot of changes in this new version of the game.
There are now faith, education and administration as new needs of the citizens. The according buildings church, school and city hall have a limited range of influence, as well as police and hospital. Note that in order to have citizens moving into your town, the housing areas need to be in range of all the infrastructure buildings. The range of an infrastructure is indicated by the grey area, which is show when you move the ingame cursor to the infrastructure building.
The buildings will be counted and their number can now be seen in the statistics, so you know when to build new infrastructure.
Taxes can be set now, so if your citizens, merchants or entrepreneurs do not like your city that much, you might sometimes be able to lure them with low taxes into your town.
Building is a lot clearer and easier now, you can access the building menu with the number 1 through to 7 and then select all the buildings. 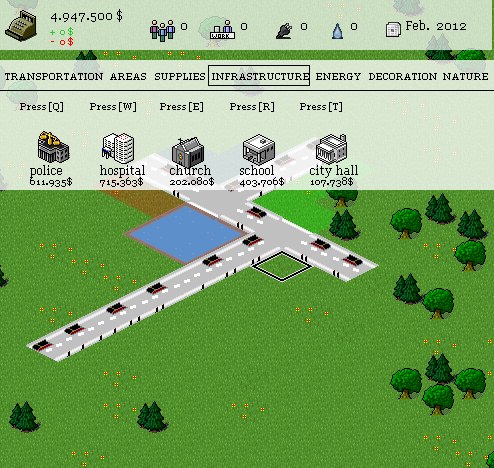 The new building menu features apart from the new infrastructure also nature, with trees and water, and decoration. Decoration is a new goal in the game, since it is very expensive. But if you manage your town well, you will be able to build yourself a golden victory statue or an obelisk.
Then of course there are graphical improvements, like prettier info windows or passengers in the street, and bug fixes. :) 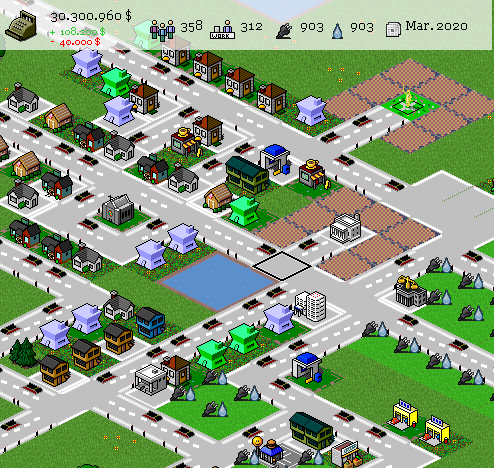 Hope you enjoy this first official full version release,
See you around,
toddy

Looks interesting I'll give it a try

I could get so autistic with this, do want.

Make sure you copy an idea or two from what the OpenTTD and Simutrans teams are doing ;) they may be transport sims, but boy they are comprehensive (especially the latter of the two).

I don't have access to my desktop computer right now (bloody RAM broke after 12 years or so of life), but I'd love to try this out. Best of luck with your game!

Yes, apart from Sim City those two games were also very inspiring for me :)
Thank you very much! Have fun when you get to trying it out ;)