After our release on Desura, we got a lot of questions about the game. We've taken the time to respond to some of these questions.

Posted by RedButtonGames on Feb 4th, 2013

It's been a while, but the bulletin has returned with a very specific purpose. Since Mage Tower has been available on Desura, we've gotten a lot of questions about Mage Tower and its development. At first, we responded to each individual question, but today we've consolidated these questions into one article (since many of the questions have a similar theme. The full text of each question can be seen at the bottom. Here we go! 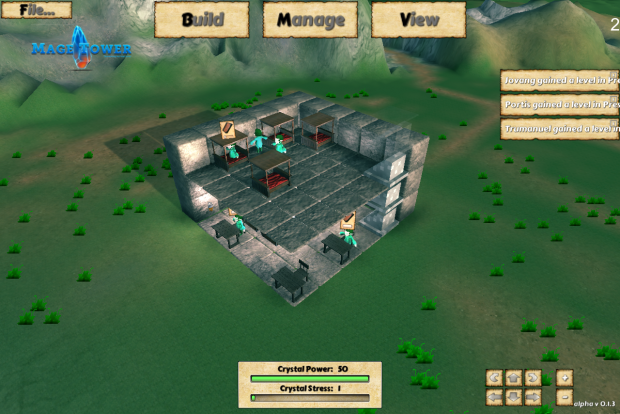 Q: Where is the community? (from elunir)
A: We're a small team (more on this later), which means we wear a lot of hats, and every minute of time we have is precious. We've been debating about what the best avenue is to build the community. A forum is ideal, but requires a bit of overhead - even if that overhead is just checking and responding to the forum daily. We'll probably get there eventually, but we're not sure if it makes sense for our small team, or to have the more "traditional" conversation through comments and news posts.

Q: Why is the development so slow? I want this game!! (from Kindlesmith, leandro213, ds39uuca, UndefinedM)
A: Our team is currently one programmer and one artist. The programmer is working full time, but the artist is working on assets in his spare time. Even with this small team, we've made some decisions to get features built faster, such as buying in-game assets rather than producing them ourselves. These assets are intended to be replaced eventually, but until we reach that point, we have placeholder assets that don't look horrible.

We plan to bring on more team members, but we want to make sure those team members are the right fit. We don't have any substantial capital for hiring, which means until our income becomes stable, we're looking for people who are both skilled and will work for experience or for equity in the company. That combination of requirements makes potential team members a rare commodity.

Q: How will Mage Tower differentiate itself from Dwarf Fortress, Towns, Gnomoria, A Game of Dwarves, etc? (from Janppa, stuntaneous, yhann, and many others)
A: Before I dive into the meat of the question, I want to mention our development process. Rather than having a specific vision for what we're building say, 4 months from now, we focus on the next patch, the next feature, the next update, and build pieces at a time. This helps us in many ways, like preventing crunch time, reacting to gamer's opinions, and being very agile in our strategy. In the software development world, this philosophy is called Agile software development. So, although I have some ideas about what Mage Tower will become, I'm not so attached to any one idea that I can't cut it.

However, I understand that as a player, you want to know what this game will become! Aside from what it already represents (a cleaner, more modern interface for DF-style games), the biggest thing we're shooting for is a larger world view. At its heart, Mage Tower is still a management game, and management games are usually rooted at a specific place, with specific boundaries. Although we're not planning to allow complete freedom on where to build, we're hoping to build a world that can continually expand as you explore. You might find a town 10 minutes walking east of your tower, conquer it, and build another tower as an outpost in its place. You might later find a competing tower of mages further off in the distance, and begin to plan how to defend or overthrow them. Basically, we're hoping to build a larger world to give context to each tower, but restrict certain interactions to only happen in certain areas (such as building and combat). It's a sneaky way to avoid some technical complications with allowing building anywhere, while still expanding the world.

The next biggest differentiator is factions in the world. In many games in the DF-style, you can gain favor or make enemies with different factions, but you don't always see these factions outside of your base. Since the world is explorable and expands, you'll have exact context of where factions are, where they might be expanding, and make decisions around those factions. Looking at the town-conquering example above, you may have conquered the town before realizing that further east of the town lies a castle, which sent in knights to reclaim the town after your actions. Since you choose how to interact with these factions, you can befriend or anger these factions as you see fit. You can ally yourself with the villagers to ward off the dragon, or team up with the dragon to burn the landscape.

The last differentiator I'll mention is the theme. Although many DF games have some level of magic involved, the focus in Mage Tower is to build the mechanics directly off of "knowledge" and magic. As mages gain levels in different knowledge, new activities become available, and in some cases, new features appear in the game. In addition to magic, the work ethic of mages (compared to dwarves) is pretty...lazy. Why lift a finger if you can just make something float? Those theme decisions are driving a lot of our design decisions, which should create a different "feel" to the game than normal.

I'm sure we'll touch on this topic in the future as we build more of the game, but hopefully that gives you a better idea for what our roadmap is.

Q: Why don't you just ask to use the "Game of Dwarves" engine? / Don't use that engine, it's not that good! (from: mjgajda / neronix17 )
A: Game of Dwarves was announced around the same time we finished the prototype for Mage Tower. We were watching it closely and nervously as it was released, knowing that if it was successful, it would cut into our niche. Unfortunately for players (and fortunately for us), it looks like Game of Dwarves could use some improvements. From my brief experience with it, it seemed like the team was very comfortable with 2D, but it didn't transition well into 3D.

Our prototype, however, focused on the interface first, knowing that the interface was critical to how the game would feel. This is probably partially responsible for why there aren't as many features in the game - we focused a lot of energy towards polishing the user experience. We looked at Game of Dwarves and realized "we don't want to make their mistake" and are taking much care to tweak the interface to an optimal level.

Also, Paradox is awesome, and I hope that Game of Dwarves doesn't make them shy away from the genre, since they seem like a great fit for that type of game.

Q: Is there a Linux version coming? (from: d10sfan [twice!] and sheldonh)
A: The first time this question was asked, Unity 4 was just released, and we hadn't upgraded yet. Now that 0.1.3 is out and we've upgraded to Unity 4, we really don't have any obstacles left. However, the release of 0.1.3 was already dragging enough, so we decided to release 0.1.3 without Linux, test the Linux version, and release that with the next Mage Tower update. Linux was the primary reason for updating to Unity 4 so soon, so it'll be in the next patch/update.

Thanks for all your questions! If you have any more questions, please use our feedback form or comment on Mage Tower on Desura. If you haven't already, follow us on Facebook and Twitter to stay up-to-date on our latest news.

hehehe, I see I have been quoted :D Do what is needed people. Perfection takes time.

I like a game of dwarves :) I can't wait for this to be a proper playable game. I am not sorry I supported you too early though and have all faith you will continue to work in a lot of yourspare time :)

Yep, take your time, heck I didn't play edge of space for 7 monthes after I paid for the alpha, I came back to it and loved it. I think it'll be the same here.

if you guys take your time it may be a year or two before I really enjoy the game, but I know I will.

In other words, Take your time and we won't be too upset, besides if you take your time then release huge powerful updates and make a suddenly very good game alot of people will get on the bandwagon as has happened for many similar games.