During his adventure, the player will have the opportunity to accept or reject quests offered by non-playing-characters in the village.

The chance takes also a significative place into the quests rewards system, but in quests' objectives too.

For each new game, quests will be randomly generated in order to offer an unique adventure.In Chaos, quests are sorted into several task : 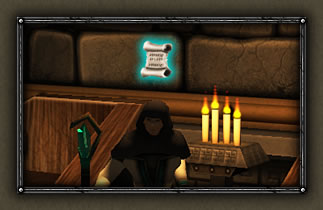 Each task will be randomly built, and in a greater or lesser important way.For example, the guard captain of Fort Merals may ask you to find the Sanctified Sword. In this case its location and the difficulty to access this item are random, changing at the same time the quality of the rewards.

The bonuses given by equiped objects are directly dependant from your character level.

While your character grows up, these bonuses will grow up too, until they reached the maximum value.

One example:
The Slaughter Axe, Level 7, will give 2 points in your Strength capability if you equip this weapon at level 1, but 9 points (the cap) at level 7.

The tooltip of this object should look like this :

If the Durability value falls to 0%, the object is simply destroyed. By the way, you can not repair your equipment !

Even your best blade will break sooner or later, and then you will have to find another weapon !
Armor and weapons acquired during adventure will increase the power and endurance of characters. At the end of a game, or each logout, all items are saved and available again for the next game.

The power of an object is classified according to a color code :

In Chaos, armor and weapons are not endless. Throughout fights, the durability of the equipment will inescapably reduced to reach 0 and then, the object will be destroyed, regardless of its level, rarity, or quality.