Procedurally-generated tree graphics, a ton of small fixes, and big improvements to saving/loading.

Posted by UltimaRatioRegum on Nov 16th, 2013

The past two weeks have been very academia-heavy, and I haven’t been able to produce as much work on URR as I’d like. We’re still on for the end of the year for version 0.4, but this is going to be a short update on a few small aspects developed in the last fortnight. I’m currently working on finishing off my list of small fixes, bugs and improvements, and I aim to finish that off by the end of the week. There were around fifty things on the list, which is now down to about thirty, and constantly dropping. Some highlights of the past week:

- I’ve improved the way saving is handled, reducing the length of time it takes by around 40%, and I am confident I can take off at least another 10%, and possibly even enable multithreading so that saving (though not loading) can actually take place in the background. Loading, meanwhile, is between 50% and 75% faster, depending on what kind of area you're trying to load. I intend to improve this even more in later versions, but that'll do for now.

- Fixed a large number of issues around throwing items indoors/outdoors, how they are rendered, and the messages they display upon impact, which can be dependent on whether you see the thing they hit, and/or the thing they land on. I believe every variation is now catered for, but this requires a little more testing.

- Having finished off all the procedural graphics that appear when you look at terrain, I’ve worked on the ones for trees. Each species of tree has a distinct colour for its bark and its leaves – in general these are true to life, though a few trees are slightly stylized in their choices of colours purely to aid in distinguishing them, rather than submit to absolute realism. The branches display at different angles based on what part of the tree you ‘l’ook at, and the leaves and branches are naturally procedurally placed, so here are some examples: 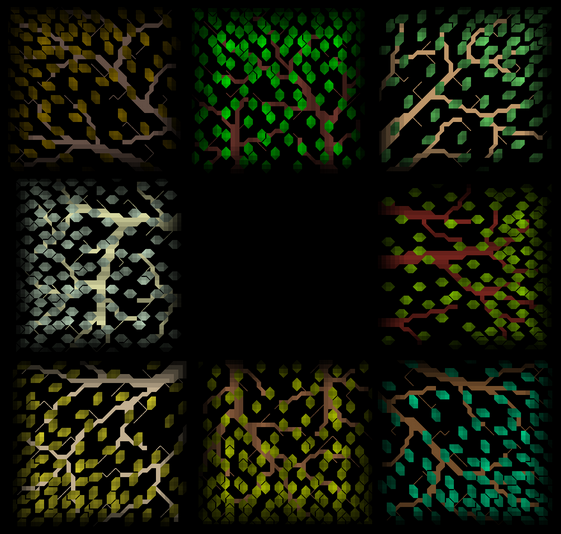 I’m pretty happy with them. Anyway – I’m tentatively going to estimate that 0.4 will be released either around the 20th, or if it takes a little longer, around the 29th/30th of December (or possibly even on New Year’s Day). I have a hefty amount of academic work that needs to be done, so it’ll all depend on how the two both play out. Either way, within two months, the next version will be out, and you’ll be able to set yourselves on fire and throw torches down darkened corridors to your heart’s content. Once we get closer to release blog updates will return to weekly, not fortnightly (as they always do), but I suspect we’ll only have one more update in November. Until next time you can keep up to date on my devblog, Facebook page, or Twitter feed. The devblog is updated weekly or fortnightly generally on Mondays, Facebook a few times a week, and the Twitter roughly daily. Any thoughts, please leave them in the comments! Stay tuned...

Will different tree types influence gameplay in any way?

In the future, yes, in terms of properties of different woods (weight, strength, etc), but that's a very low priority - I'm not really making a "simulationist" game, and things like that aren't crucial to gameplay at all.