King Arthur's Gold got some speed optimizations and more bug fixes. Also please read to get to know where we are at with the full version of the game.

Posted by Michal.Marcinkowski on Nov 7th, 2012

IF YOU SEE NO SERVERS AND NO AUTOPATCH, PLEASE DOWNLOAD AND REINSTALL KAG FROM HERE:

SOME BUILDS MAY HAVE BEEN CORRUPTED AND WILL NOT AUTOUPDATE. WE APOLOGISE FOR ANY HASSLE CAUSED BY THIS SLIP UP, THOSE RESPONSIBLE HAVE BEEN SMACKED ACCORDINGLY.

More bug fixing went on these past few weeks, with both good and exhausting results.

Overall, this is largely a bugfix build again to help make sure the intermission before any public release of the scripting build is as enjoyable as possible :). 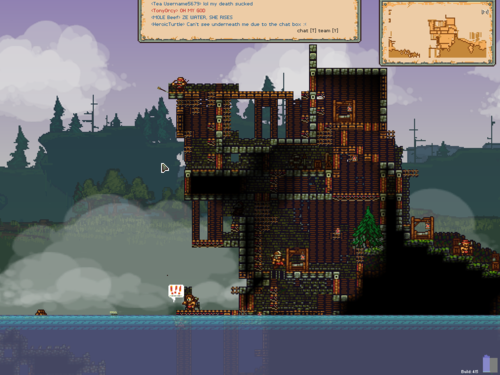 As an insight into development, a few words on where we’re at:
We’ve been working hard on the scripting build of course, but we’ve decided over the last few months to “do this right” - we could have finished the game in a matter of weeks a while ago by hacking in a ballista, porting the fire stuff to the normal build and adding a fire arrow item, but we decided to recode the vast majority of the game in scripts in order to gain experience with networking a scripted system, and to ensure the game can survive long after we can afford to continue working on it. This means that there will be none of these legacy bugs will carry over to the final full version of KAG, and that any new or persisting bugs will be visible and able to be modded away or at least brought to our attention. It's been amazing seeing what modders can do with the current config-file based interface, we’re excited to see what happens once we throw a scripting interface with a large collection of examples at you!
Obviously, doing things the right way comes at a cost. We are currently actually months past our initial deadline - while we’ve been able to get around that and have the freedom of the game being “done when it’s done”, it still feels like it’s taking forever on our end, as well as on yours. Please don’t feel that we’re being lazy or that progress is not being made - Michal and I have been working furiously long hours (minimum 8, usually 10-16 hours each) every day for the last few months, suffering and working through burnout and illness (and in my case, the end of semester and exams at the same time). We want to see this done even more than you guys do, and we want to see it done right. Bear with us while we do that ;)

"THOSE RESPONSIBLE HAVE BEEN SMACKED ACCORDINGLY"
Haha, that's good ;) Just make sure to not smack them too hard so that they still can work :)

You are awesome guys, love your game.
Keep up the freaking amazing work.