A major change to how national ideologies/policies work, and procedurally-generated nicknames for major cities!

Posted by UltimaRatioRegum on May 10th, 2015

This week I haven’t been able to get any coding done, and the same will sadly be the case for the next seven days – I’ve been finishing off an academic book chapter due in very shortly, as well as doing some writing for various online game publications (links will be posted here once my pieces are published), and also writing three different conference presentations for three talks I’m giving at DiGRA in Lüneburg next week (so once I upload that, and my previous set of talks, I’ll be uploading six sets of slides for your perusal! I’ll get around to it folks, I promise). So, this week and next week we’re going to talk about some of the more abstract intentions/plans for 0.8 onwards, then hopefully after that we’ll be back to specific updates once I get working on 0.8 again upon returning from Germany (week of the 18th onwards). Two big abstract/worldbuildy changes in this release alongside the development of NPCs (!!) are policies, and nicknames, so let’s talk about these.

During the development of 0.7, I found myself making a major change to how national policies work. Originally the idea was for them to give abstract benefits to the player – one policy might yield a player who belongs to that nation extra strength, for example – but I found this increasingly uninteresting. So much of the game’s mechanics are meant to be about figuring out and understanding the generated world, and I realized it would be a lot more interesting if policies directly affected what spawned in each nation – so the macro of a nation’s political ideologies and policies then determine what buildings appear (or not) in cities, towns, within buildings, etc.

So, a pretty simple key. Green effects are policies which don’t relate to shops; yellow policies relate to types of shops which can spawn in that nation; which the red ?s, funnily enough, are policies I haven’t thought of a good effect for (any ideas?). Escort Cavalry is a nomadic-only policy, and Chiefdom is a hunter-gatherer only policy, but aside from those, any of these policies can spawn for any feudal nation (Monastic is in red because it is a new policy I haven’t yet added to the game or created an image for). At the bottom you’ll see two binary possibilities: from 0.8 onwards, nations will either be slaving nations or won’t be, and nations will either use gunpowder weapons, or won’t. 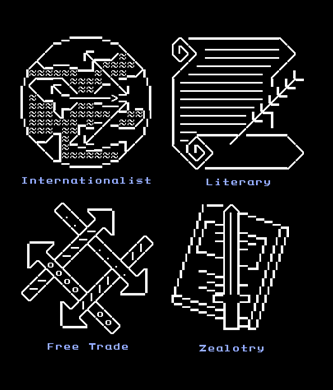 With this system policies will therefore seriously affect (I hope) a player’s path around the world and choosing which nations to visit, knowing that certain shops will only appear in certain nations, some will be more/less hostile to foreigners, some have different systems for payment (or not) when moving around cities, some nations will have different punishments if the player decides to commit a crime within their land, etc. Should add an interesting level of grand strategy to the player’s movement, and be a lot more interesting than “abstract policies” which affect the player, but fail to distinguish between nations.

Credit for this idea must go to Retropunch on the Bay12 thread for URR. He suggested that I could add some distinguishing factors to cities which both make them stand out more from each other, and add the potential for nicknames. In this release I’m aiming to add this in over a dozen ways to make cities more distinct, and add in another “clue” – i.e. the nickname – by which cities might be identified. This means the generation algorithm for a small number of cities will be tweaked to ensure that something very noteworthy spawns in/around/throughout a given city, and then an appropriate nickname is generated. Some examples:

City with many slums: “City of the Downtrodden”, “The Evergrowing City”, etc

City with many gardens: “The Flowering City”, “The City of the Hundred Gardens”, etc

And so on. I’ve got around fifteen ideas so far for feature/nickname combinations (you’ll be able to find the rest in 0.8!), so maybe five cities per playthrough will be granted some unique “overlay” (like lots of gardens, lots of statues, etc) and a nickname to go with it. So then the player will sometimes be told “Travel to [ City Name ]”, but will instead sometimes be told “Travel to [ City Nickname ]” – a small thing in gameplay terms, but something which’ll add some nice extra variety to the world’s cities and help the player remember which city is which. The idea of the nickname in general seems like something very promising, so I’ve also been working on adding nicknames to other things in the game, primarily rulers and important historical figures, and also noteworthy living figures the player will be engaging with, and it’s those I’ll be talking about next week!

The nicknames sounds like an interesting and useful idea.

I agree! As I mentioned, I'm expanding it into NPCs too, which I'll cover next week...

Way back when you were talking about translating languages in dungeons (or whatever you're calling them) to solve puzzles, and how you didn't really know how to implement it. Instead, or in addition, what if different nations (existing or ancient) had different nicknames for the same in-world object, idea, or location? One nation might call their deity "Grandmother Lahm'r," while another nation that dislikes the deity or religion might derogatorily refer to statues of "The Old Hag."

I actually think this is a great idea! Having multiple terms for the same things would seem to integrate with the rest of the game plan extremely well; I'm working entirely on NPCs at the moment, but once they're done, I'll be moving back in this direction.

Bay12 forums. Good to hear you are there too. I am a big fan of Dwarf Fortress. 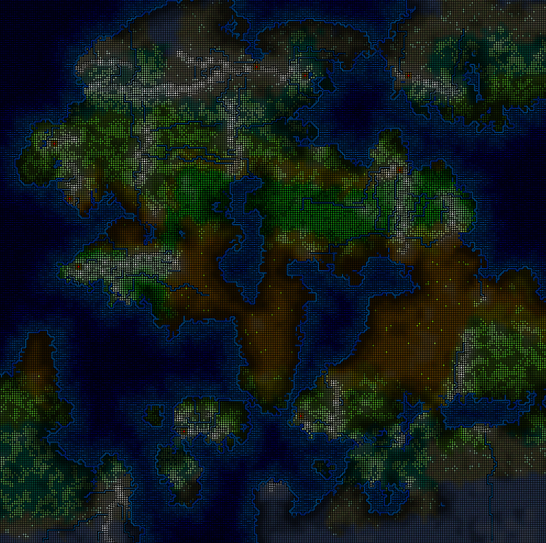