Comes with several stability improvements and the soviet MAD tank!

Note: The 1110 playtest contained issues under Windows and Debian/Ubuntu.
These have been resolved in the 1112 build.

We have just released a new playtest build containing the latest snapshot of our development progress. Playtest-20131110 can be downloaded from the download page or using your git client. If you run into any issues or have any feedback then you can create a ticket on our Github issue tracker or find us on IRC.

Some of the key changes from our stable september release include:

As usual, the changelog contains all the details, including a list of changes that affect maps and mods.

The new settings menu provides improved access to the important settings, and is unified across all the mods.

The new Airstrike power calls a group of A10 to strike an area with gatling guns and napalm bombs. 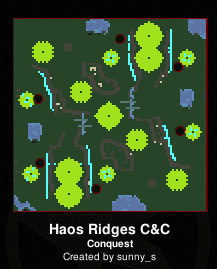 Haos Ridges is now available in C&C (thanks sunny!).

Our friends at Project Perfect Mod have created a new OpenRA Editing Forums section where modders can compare notes with each other. We will be keeping an eye on these as well as our official forum (which is currently offline due to a hardware failure).

Good to see the progress! When will the next stable be released?

The aim is to stabilize the current code further, add some translations and then go for a release soon.

Amazing progress, unfortunately this release won't even launch for me. (W8 x64)
All the other releases work fine.

There's a bug in this playtest's Windows installer that causes it to install the mods into the wrong folder. As a temporary fix you can create a folder named 'mods' inside your OpenRA installation folder and move the ra/cnc/d2k folders inside mods.