I discuss the changes coming in Claustrophobia Alpha 1.1.4, including Key Binding and a Full Stat Rework.

Hello all. Apologies for the lack of news over the past few weeks. If you follow me on Twitter, you would have seen that I have recently moved to Derby, England, and am now studying at the University of Derby. Of course, this has meant that I have had less time to work on Claustrophobia, but I will still make sure regular updates are released. So, Alpha 1.1.4!

Since the first release, I have been almost constantly trying to rebalance and alter Claustrophobia's stats so that there is both the right amount of variation in the values to allow new gear to add significant upgrades, and enough similar valued enemy stats to keep combat balanced even if you choose to spec entirely into, say, Agility. In my opinion, this has not been entirely successful, and so, for that reason, I have re-purposed a lot of stats, and changed the scaling of almost everything. Suffice to say, it was a massive job, and one that will continue to be refined based on the feedback I receive from those of you playing the Alpha.
The new changes include a few things:

Somewhat related to these changes, is this screen that made its way onto my Twitter last week: 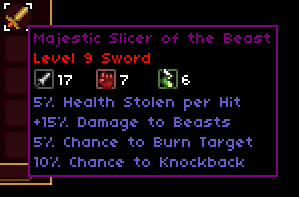 Firstly, gear now has a much nicer tooltip design, with new graphics portraying each of the stats. Secondly, although not entirely making its way into the next patch, I have begun work on ability modifiers for gear. This, coupled with stats that actually make a difference, mean you really have to consider the gear you choose.
More on these coming soon, but in 1.1.4, one modifier will be introduced: one that fans of roguelikes will love to hate.

This is pretty self explanatory. Everyone asked for it, and finally, it's in. The controls menu, found here: 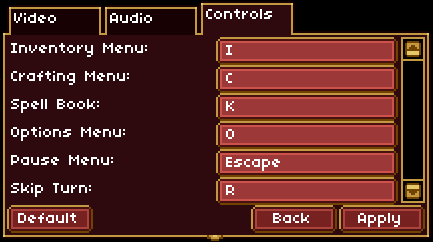 Not only displays all of the functions and the key that match them, but also allows you to rebind them to any key you wish. There are also some new functions hiding in there, such as the ability to toggle the position of the tooltip away from the mouse. Please note that the numlock movement/interaction controls are still a work in progress, and the game is not quite really to be controlled exclusively with them.

Finally, there's a load of what that subtitle says. New stuff to find, new ways to die, and less ways to break the game. Among these changes/additions:

And that is that. This patch will be the one that needs the most testing by fair, as I'm sure somewhere along the line there will be a certain combination of stats/enemies which cause disruption. If you find anything like that, or have any feedback at all, drop me a message somewhere!

Alpha 1.1.4 will hopefully be out some time next week, depending on my Uni workload!

Sounds like a good beefy update. Keep up the great work!