I discuss the changes coming to Claustrophobia in Alpha 1.1.1!

Posted by TheIndieForge on Jul 3rd, 2013

First off, yes, this 'first update since returning' has taken a little longer than I originally planned. This is mainly due to the fact that returning to a project after some time away gives you a fresh view on everything. My fresh view was basically "yuck, I could do this so much better now" for many of the systems I looked into, and so a lot of time has gone into complete redesigns and rewrites of much of the game's code. I discussed a few of these changes in the last news post, and I'm happy to report that majority of those changes are now in place. So, on top of that (which you can view here), here's a run through of what to expect when Alpha 1.1.1 launches at the end of the week.

Over the last few patches, terrain generation has come on a long way from the original array of square rooms that made up the dungeon floors. However, while the last version of the terrain generation was one of the most advanced so far, it was lacking in design. Dead ends, corridors that looped back on themselves, rooms disconnected from the main dungeon, and illogically placed rooms made exploring increasingly difficult. Adding to that the massive size of the floors meant an awful lot of backtracking, and that is not what Claustrophobia should be about. Below, you can see a floor generated with the old system, compared to a floor generated with the new system. Both use the same parameters to generate. Black tiles are walls, white tiles rooms, pink tiles doors, and green tiles corridors. 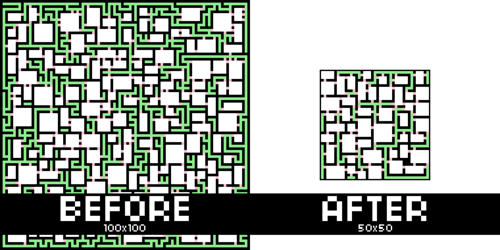 As you can see, the size of the floors has been reduced (item and enemy spawning has been changed to reflect this), and corridors and rooms are now laid out in a logical connected fashion. Rooms now spawn right up to the edges of the map, which removes the outer corridor that bordered all old maps. Corridors will pretty much always lead you somewhere, and will not backtrack or curl inwards on themselves.
As well as the the actual layout of the map, enemy spawning has been altered so that different types of enemies will inhabit different floors, and their levels will reflect the floor they are on. Generally speaking, the player should level twice per floor.

Fog of War and Lighting Effects

If you follow me on Twitter, you would have seen that earlier this week I finally fixed the FoW. The player's line of sight is now properly indicated, with lighting taking into account the player's position and angle compared to that of all other objects in the room. This means that the dodgy black tiles in the corners of rooms has been fixed, and ranged units can no longer fire through walls at certain angles. Screenshots can't really demonstrate it, but it looks great in action.

As was discussed before, I have redesigned the skill engine so as to encourage the player to make decisions and craft their own class as they play. Below is a description as to how this new system works (it's actually super simple to use):

A lot of gear balancing and changes has taken place, based on player feedback, and my own experiments. First of all, all gear now has a minimum item level which the player will have to be in order to equip and use that item. This prevents the player using gear that is way above his level, and also gives you an idea about what unidentified items you might want to identify, based on your current level.

Gold is now much more frequent to find, but the amount you get at a time has been reduced. Item rarities have been massive increased, and rarity stats fixed so that rarer items will always be better than their common level equivalent. Shops will now spawn a much more general range of gear, and far less rare, epic, and legendary items. Rings and necklaces have also been fixed so that they will always provide stats.
Scroll spawning has been changed. Scrolls will now only spawn in libraries, or when crafted with paper and enchanted ink. On top of that, Scrolls of Enchantment have been nerfed so that a single item can only be enchanted once. I know far too many people were simply spamming enchants on their main weapon to the point where it was about 10 levels too powerful. Sorry guys, but not going to happen any more!

As well as all this, and everything mentioned in the previous post, there's also a whole heap of bugfixes, item balancing, UI changes, enemy additions, crafting changes, and loads more. Now that a lot of these changes are in place, and the core mechanics are nearing where I want them to be, I can begin to focus on adding content. More on that next week!

Alpha 1.1.1 will launch at the end of the week, and be sure to read the patch notes when it does! While saved games will continue to work into this version, I highly recommend starting a new character, due to the terrain generation, skill, and item changes.

Really nice looking update. Especially excited for the polished map creation!! One of my favorite games on Desura for sure!