A new alpha version of the parkour platformer "Celaria" was released. The additions include new maps, bugfixes and a ton of (small and big) improvements.

A brief summary of all the new additions/improvements and plans for the future.

With each update the game gets closer and closer to it's final release. Let's see what this update has to offer compared to the previous (v4) release. :)

One of the things that was reported to me is that anisotropic filtering wasn't enabled at all in the previous versions of the game. This resulted in poor texture quality over distance and especially at narrow viewing angles. I fixed that and anisotropic filtering properly works in the game now. 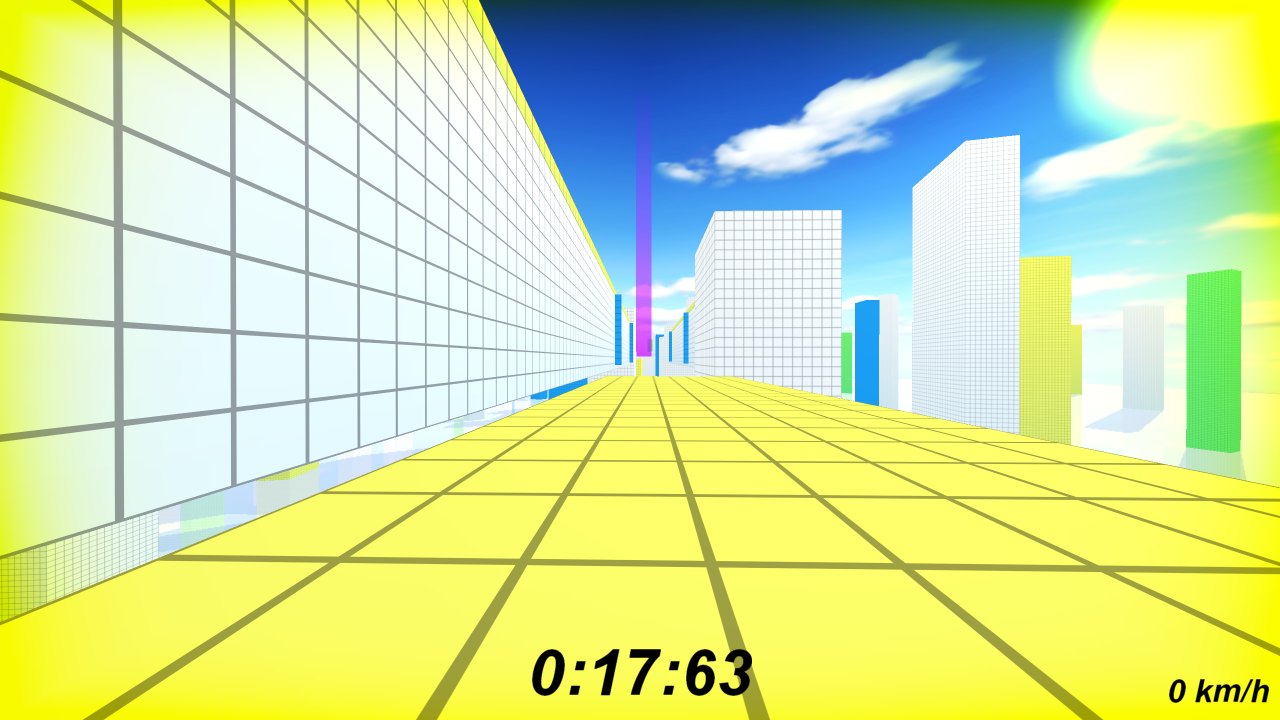 Textures are now much more detailed on narrow angles and higher view distances.

(Notice the yellow floor and the wall on the left side.) Anisotropic filtering 8x was used here.

Of course it is possible to change the anisotropic filtering level in the video options menu. 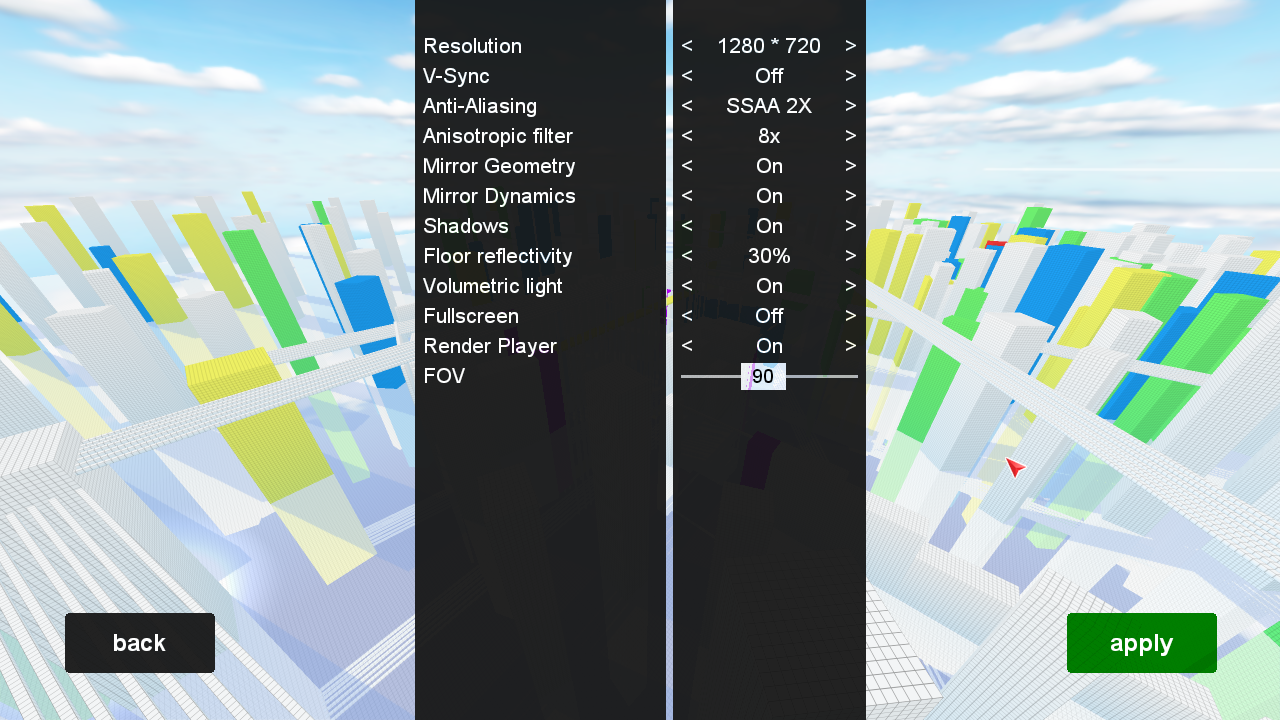 You may notice that "SSAO" isn't available anymore. It's still in the game (and you can enable it by tweaking the .ini file) but it's disabled as it is an experimental feature and doesn't create satisfying results. I'll add this feature back once i implemented a better SSAO algorithm.

I have good news for people with low-end hardware! I did a fairly big optimization on the rendering side for low-end PCs. Basically if certain options are disabled (SSAO, Volumetric light and AA) the game then switches to a simpler renderingpipeline to reduce the load on the GPU which benefits old GPUs/Integrated chipsets (with low memory bandwith and low pixel fillrate) a lot.

If you disable those specific options (AA, volumetric light and SSAO) you should have no problems to run this game on an IntelHD 4000 Chipset on at least 720p resolution at a stable 60 FPS.

First things first: two maps were removed from the game due to design/balancing issues. (The said maps are "Urban" and "Circuit".)

Also all existing medal times of the maps were rebalanced.

In order to balance the difficulty curve between the first 5 "beginner" maps and the more difficult ones (like the map "Rise" or "Playground") i created and added 4 new maps to the game. ("Balance", "Arrow", "Speedline" and "Towers") 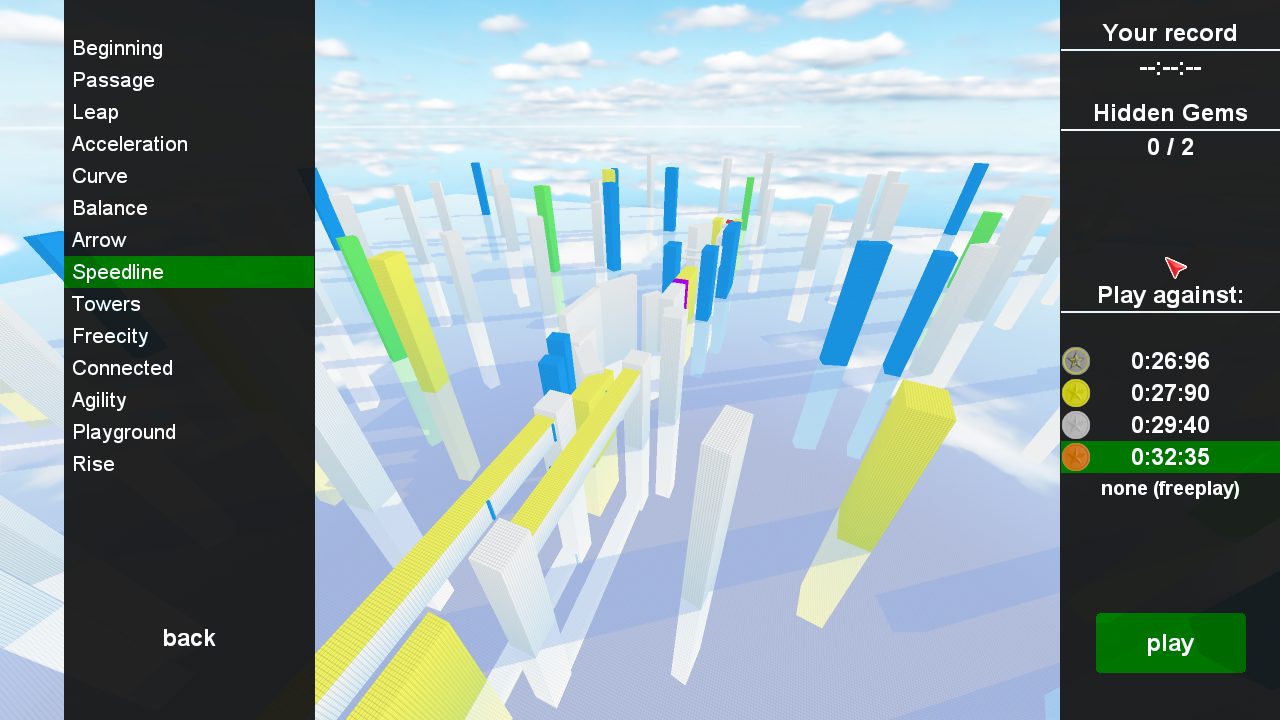 Now there is a total number of 14 maps, starting out with very easy ones (to make the player familiar with the game) while every map is getting harder and more demanding than the previous one. (Of course new maps will be released as time goes on.)

Some of the existing maps were tweaked to iron out some spots in the mapdesign ("Rise" as an example had a very difficult section right after the first checkpoint.) 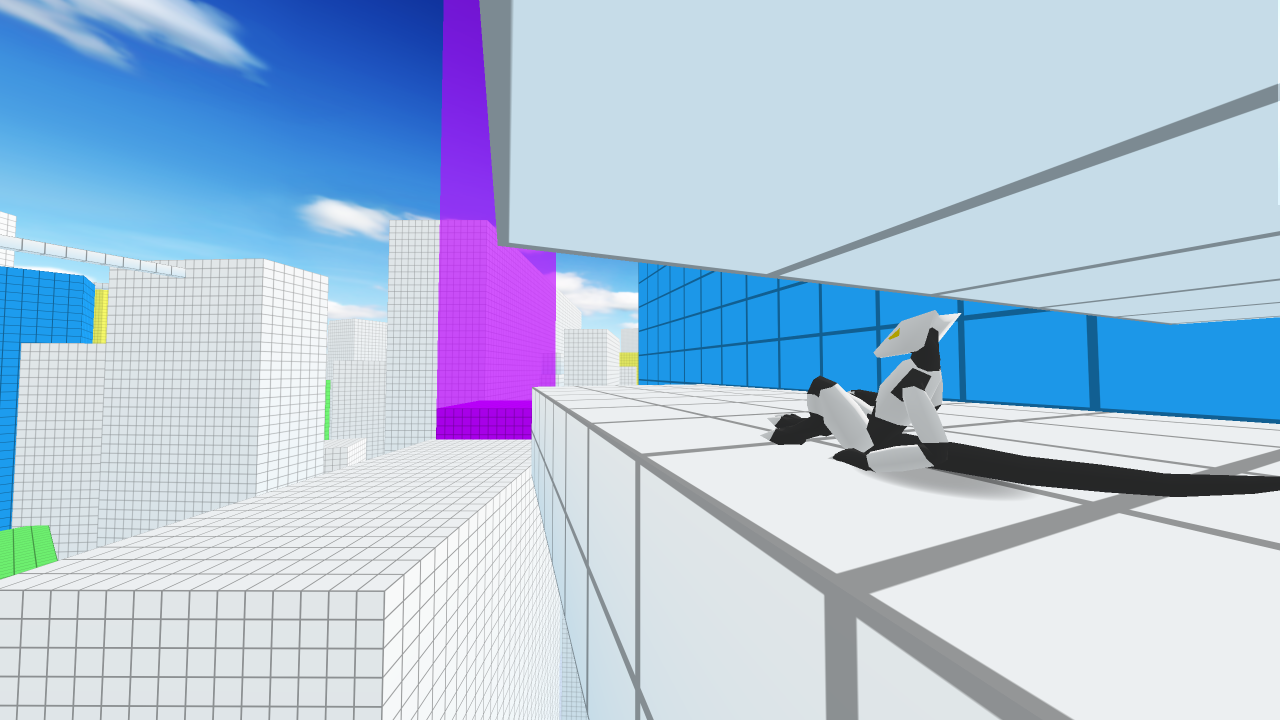 There of course smaller additions and improvements, all of which you can view here:

The game is (on the technical side) mostly done. There are smaller things like tweaking some animations, adding more soundeffects for the UI, etc...

The next big thing will be multiplayer. Realtime multiplayer exists in the game, but it's currently not available to the public as there are still minor issues on the serverside that i have to iron out. However, you can have a little sneak peak of the multiplayer mode as i did a closed multiplayer test (to test the server performance) which i recorded and put on youtube. :)

I intend to release the server source code so that people get the ability to mod the server.

I also plan on creating a specific website on which people will be able to upload and share their custom maps. I already created a rough plan as to how the database for the maps will look like and started with programming the server backend. It will take some time but i hope that i'll be able to pull this off in the near future. :)

Another thing that i was thinking about was Steam. I might submit this game to Steam Greenlight in the next few weeks. (Will be an interesting experience.) Stay tuned for more info regarding Steam Greenlight. :)

Hey, just had a few quick questions about the music of the game. Who made the current tracks in the game? Are you planning on adding any more? Would you add fan made/3rd party tracks for the game?