But we need to keep the maps fresh. One thing we learned from the current alpha is that isolated clusters of rocks and gas do little to create a juicy landscape (so to speak.) So we’re now using fractal algorithms to forge interesting shapes and obstacles in the new arenas, and have other tricks up our sleeve to ensure the landscape remains fresh and challenging.

The overhaul continues at a great pace, the majority of the code has now been sand blasted and rewritten where necessary to optimize in the process. Actually it’s surprising just how much of that old code was redundant as our host game engine progressed in areas in which we previously had to fight for performance. That old code doesn’t clean itself up and removing it potentially would have added bugs so it’s great to have an excuse to clean house and that has a huge overall positive effect on performance and stability.

Previously we said that there would be fewer ships in play and perhaps that was a little bit of a lie because we think actually there will be a lot more! Once you factor in all the traders doing the rounds, the resource collectors foraging through the zones, patrolling forces, we think you might indeed be treading shallow space as you react to the situations unfolding before you. But it’s making sure our new environment is ready to accept that volume of traffic, in both the shape of the playing field and the forging of effective mechanics to drive it all; and making sure that ‘fleet creep’ doesn’t slap us round the face again, such is the focus of the last couple of weeks.

Working well in the existing alpha is using statuses to add positive or negative effects to ships when they were occluded by celestial objects. An example is asteroid clusters adding effects that can help concealment but slow the ship due to care required navigating. We’re extending that interactivity further by adding materials to the thousands of cubic kilometers of rock formations ready for harvest and with that you’ll have further excuse to interact and feed from the landscape thereby anchoring you to it.

But we need to keep the maps fresh. One thing we learned from the current alpha is that isolated clusters of rocks and gas do little to create a juicy landscape (so to speak.) So we’re now using fractal algorithms to forge interesting shapes and obstacles in the new arenas, and have other tricks up our sleeve to ensure the landscape remains fresh and challenging.

Switching between zones is seamless and fluid, actions are progressed in the background in realtime.

Once work is completed there we’ll move onto the resource collecting and trading mechanics that have been patiently waiting to enter the arena. Then we’re back over to combat and integrating it with physics, making sure that impacts affect ship movement as they should. Integrating physics is very exciting actually, especially as testing seems to show that we can leave all the rocks in the physics simulator with little effect on performance (as long as they don't all start moving!) meaning that they too can potentially react to stray blasts that may hit them. All of this further enhancing what is already quite a rich view to behold, with the battles taking on an organic and unpredictable feel. 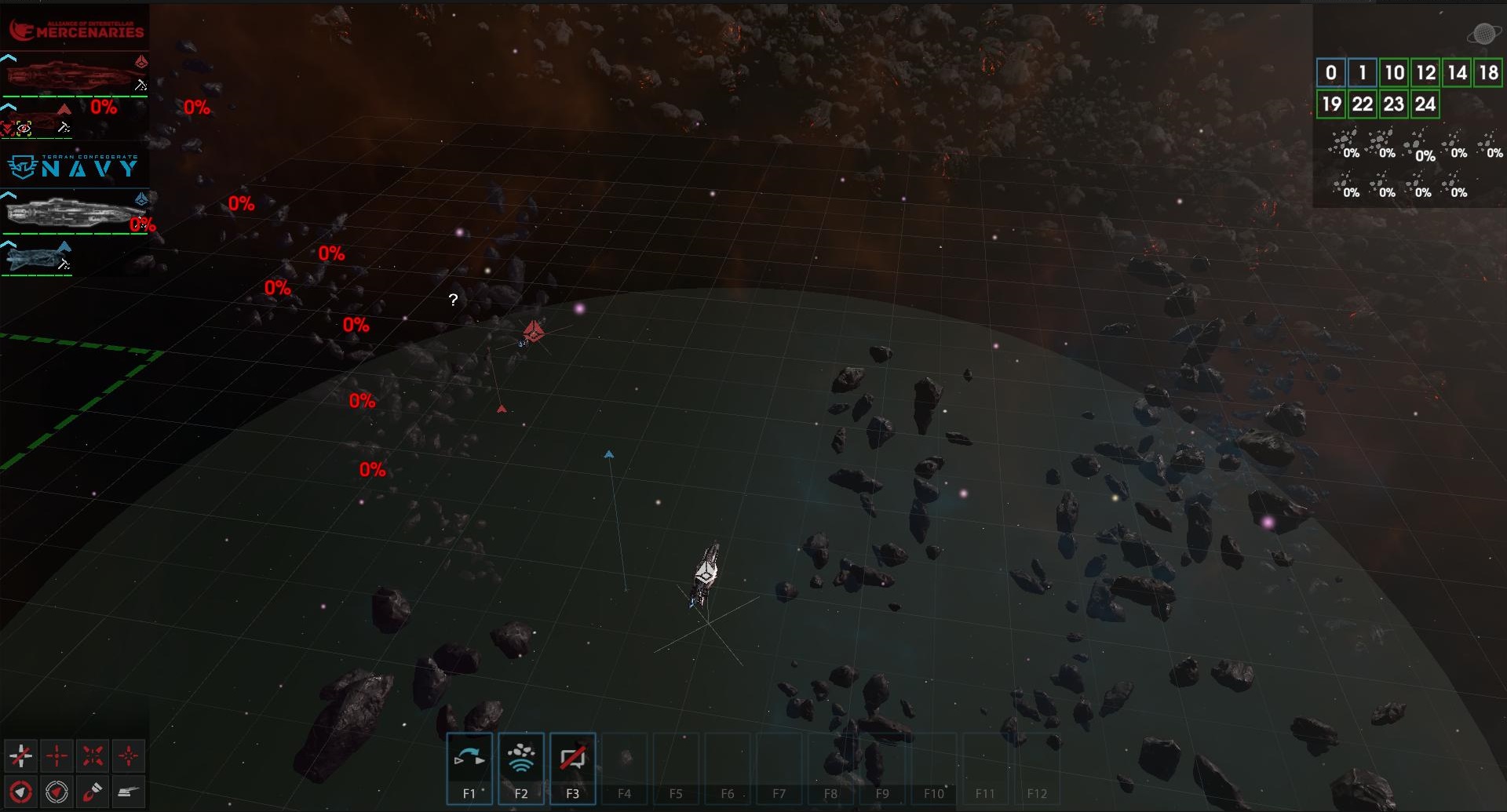 So once that crazy effort is over with, we’ll wrangle with the procedural parameters some more, add a bit of the grind and flavor that we’ve all come to expect, rewrite the sound delivery system, add the dozens of new soundtracks and voila; one fully 3D, fully customizable, open-world, procedurally generated RTS/4X game, with physics and simulated ballistics, trading, resource collection, unit construction, modular base building and a direct ship controller thrown in for good measure.

Sounds a little crazy listed out like that, but 8 people, 2½ years work, we have all the pieces and it’s just a case of folding them in with all the necessary care and attention. But who are we kidding; we’re just as excited as you! This is our idea of the ultimate space game. But we hear a word whispered by your thousands of voices, hidden away in the dark and that word is... when?

Soon we’ll canvas for beta testers – everyone who preordered and has access to Shallow Space currently will be invited to switch to a beta build and feast on the new open world glory. We can also expect all the media to be updated and the Roadmap will be revised to align with the new medium to long-term goals, the gallery and Steam page will also be updated with said glory.

Look forward to more fantastic models in the coming week including; boarding pods and repair drones and Part 2 of the new short story ‘Paradijs Lost’ will be hitting your screens early next week too. Cheers for the continued support, it seems the recent news is bringing some long term supporters out of the woodwork and it's great to see.

We REALLY appreciate the comments and likes guys! A lot of the criticism coming in is actively being rolled into the overhaul, so please; keep it coming!

If I learnt anything from Freelancer - its that debris fields are always interesting if you have different types - ie. Rock, Scrap, Ice, Crystal etc... with different forms of 'fog', thick, green, purple, brown, etc..

Any chance to have sub components and armor value on big ship ?

For exemple, after a Battle left side of the ship is pretty f*cked up. So expose the right ?

There are directional shields and subsystem targeting, directional armour is a good idea but might be a little hard to indicate onscreen.

Thanks for feedback dude!