Some time has gone by and sometimes you forget to update things here & there. Then you remember things and have to fix it back up SO HERE WE ARE! We released Shutshimi: Seriously Swole at the end of August on Steam, PS4 & Vita, yay! TLDR; I go on to talk about what we've been up to and everything that led up to release. 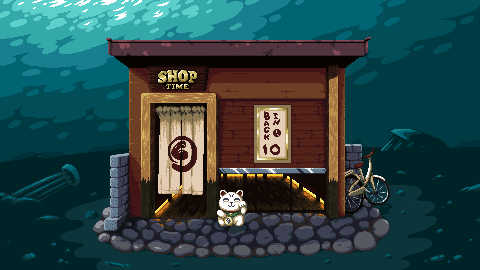 Some time has gone by and sometimes you forget to update things here & there (thanks for helping us out with Greenlight in that time). Then you remember things and have to fix it back up SO HERE WE ARE! We released Shutshimi: Seriously Swole at the end of August on Steam, PS4 & Vita, yay! (this is the part where I tell you to go buy it please)

Leading up to all this was a spark of an idea to take the original XBLIG/PC version of Shutshimi & make it better. When we were working on Shutshimi originally we had tons and tons of fun ideas that would have created a nice update so we started to sling that concept around. So we started to work on it and something unique happens, we secured a publisher in Choice Provisions (used to be Gaijin Games, makers of the Bit Trip Games) who are awesome friends & partners to work with! The wonderful chaps pushed us to go even farther & work even harder. Thus was born the idea of Shutshimi: Seriously Swole, essentially a PLUS version of the original that we were going to release not only on Steam, but also on PS4, Vita, & WiiU!

This created an interesting challenge in front of is seeing that it was written in XNA and doesn't exactly port easily and the choice was made to switch to Unity. The next following 6 months or so was a mix between updating the game overall while porting. We ended up updating most of the graphics, adding a ton of new content, some new modes, and a 4 player co-op that we took some ideas from New Super Mario Bros where you're always getting in each other's way. Following this was getting everything prepared for consoles (there's a lot of content that needs to be created when launching on consoles) and going through certifications.

So the fateful day came and we released on August 25th to some kind words from some wonderful folks & took at trip to visit PAX Prime to wave our fins around. The only slight unfortunate part here is we're still in certification process in Europe for Sony & for the WiiU, but we're crossing our fingers and it should come swimming in those streams early in the new year!

Thanks to everyone who's reading this and has supported us over the last couple years, you are all the best! I'll try and keep these things updated better next time I promise!