In this weeks update we talk about oceans and sea travel and we also give a big overview on what to expect in the worldmap rework update that is coming up early next year!

Ever wondered why there is no big body of water in the world of Battle Brothers? Well, wonder no more because now there is! And you can even fast travel from port to port for a small fee to cut down on those long pilgrimages. Let’s check out the details!

A while ago we talked about how we want to reshape the geography of the world of Battle Brothers. How we'll have both land and sea for an actual continent and smaller islands off the coast. In short, a more believable and varied looking world to play in. If you missed the original announcement back then, you can read up on it here. With this in mind, our focus turned towards the ocean and the coast this week. 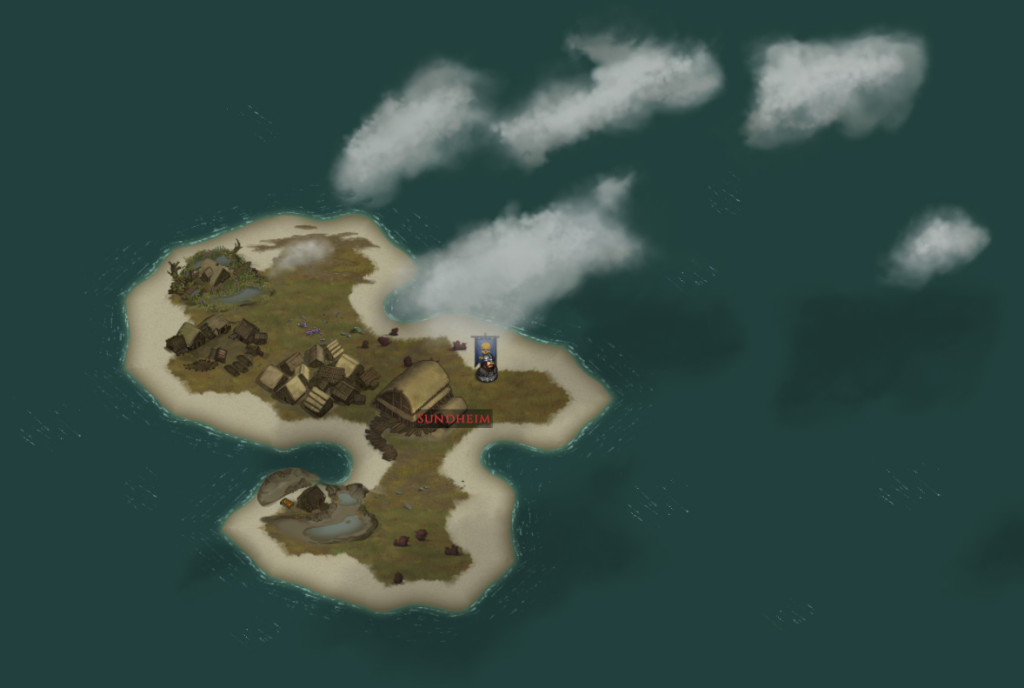 Creating a coastline that fits well into our hex-based tile system, looks nice and integrates seamlessly with all kinds of different terrain we now have was a surprisingly nerve-wracking endeavour for our artist. After a long process of trial and error, and experimenting with a wide range of brushes and textures, we now have an actual shoreline along the coast where ocean meets land. With that established we can go further to add various details, like driftwood and rocks, to make the coast look more varied. At the same time we're looking into animated waves for the ocean in order to make the worldmap feel more alive than before.

Not only makes the ocean for more interesting geography, it also makes for natural barriers for travel. In fact, some settlements on islands off the coast can't even be reached by foot. To make these accessible, and to cut down on travel time across the world in a way that integrates well with the setting, we've added fast travel by boat this week. 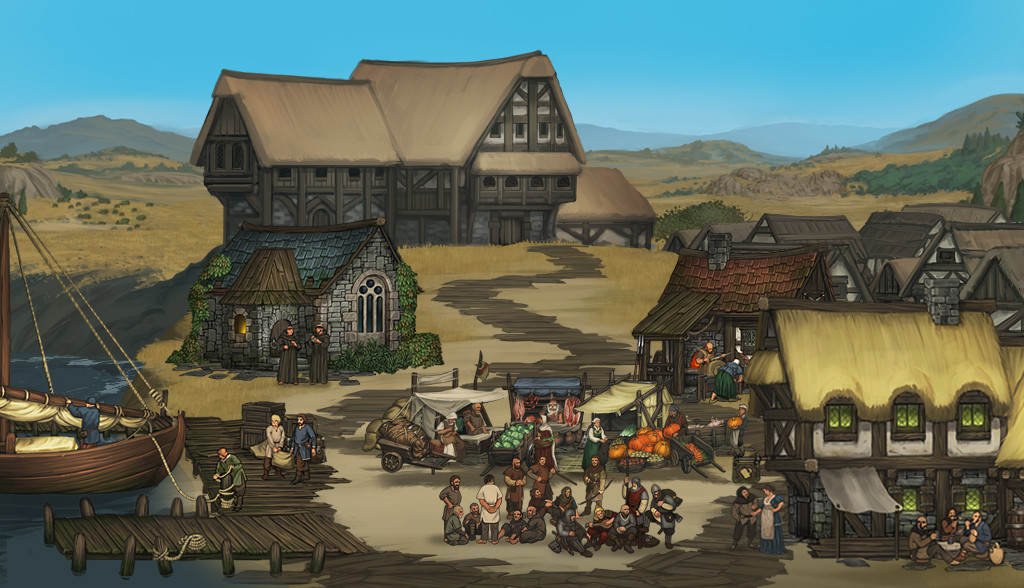 Coastal settlements, whether a small fishing village or a mighty castle by the sea, come with docks which can be accessed from the settlement screen. Here you'll be able to browse through available routes and board a ship for a small fee (depending on distance and the number of men in your employ) to fast travel to another settlement with sea access.

We have been working for quite a while on the biggest update to the game yet and work will continue until early next year. This is why we want to take a step back and give a quick overview over all the features that you can expect with the big update.

As mentioned above we did a complete overhaul of how the world is generated and added completely new regions and climates like ocean, steppe or tundra. Having a procedurally generated world that is different on every new playthrough is one of the game’s core features so we took our time with making it just like we want it to be. 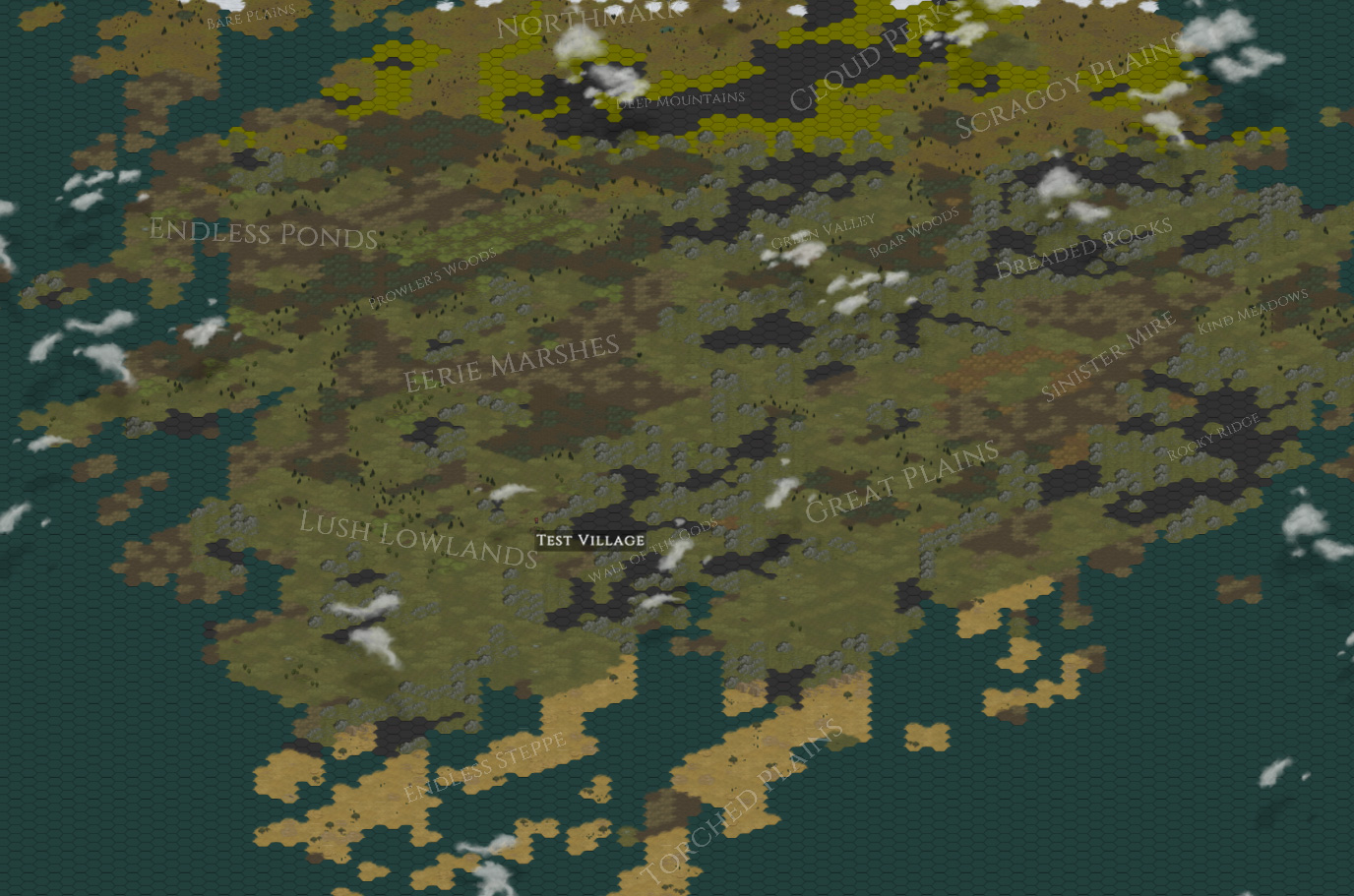 Settlements will have a clearer purpose and this is reflected both in gameplay and visuals. For example, a fishing village along the coast will offer you predominantly fish as provisions for relatively cheap prices, have more fishermen than other backgrounds to hire, and will have visuals that reflect its purpose. A mining village at the foot of mountains, on the other hand, will have a better selection of both metal-based equipment and potential recruits with the miner background.

This way we add variety, atmosphere and immersion to the world and give each settlement the character and uniqueness it deserves. 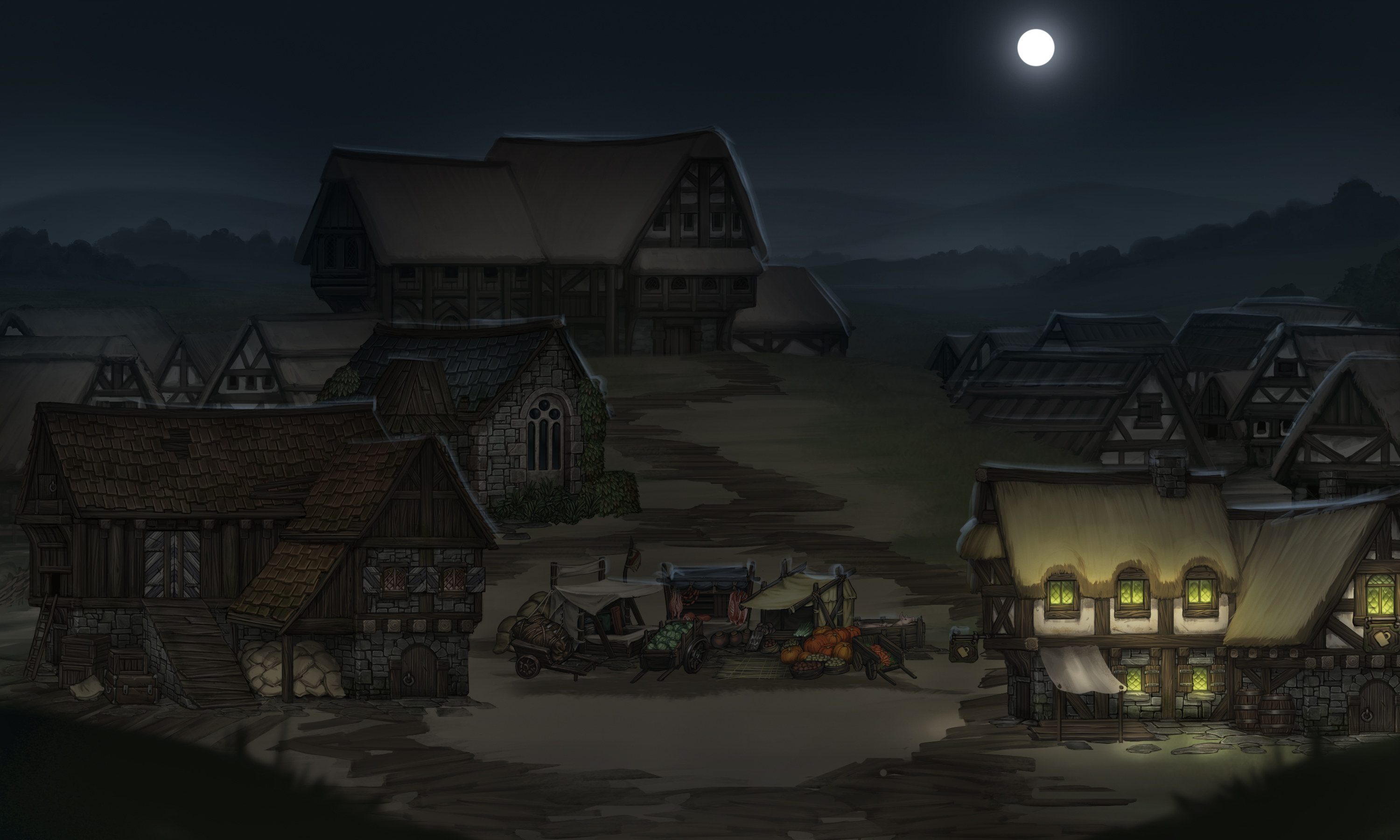 Attached locations are small specialized locations outside a settlement that influence heavily the available goods, services and recruitment options of that settlement. For example, outlying wheat fields will not only make food more readily available and cheaper in the nearby settlement, but also have more farmhands volunteer for your mercenary company. Iron mines, on the other hand, will increase the selection of metal-based weapons and armor in the settlement, and will bring a larger population of miners looking to take up the mercenary profession. A stone watch tower will have a look out for bandits and beasts, and may spawn militia to help out any caravans, while adding militia to the recruitment options. There are no less than 30 different attached locations on their way into the game, and they all have different effects.

The number and type of attached locations for each settlement is determined by the region, climate, size and type of the settlement. These locations can also be destroyed and they lose their effect until rebuild. 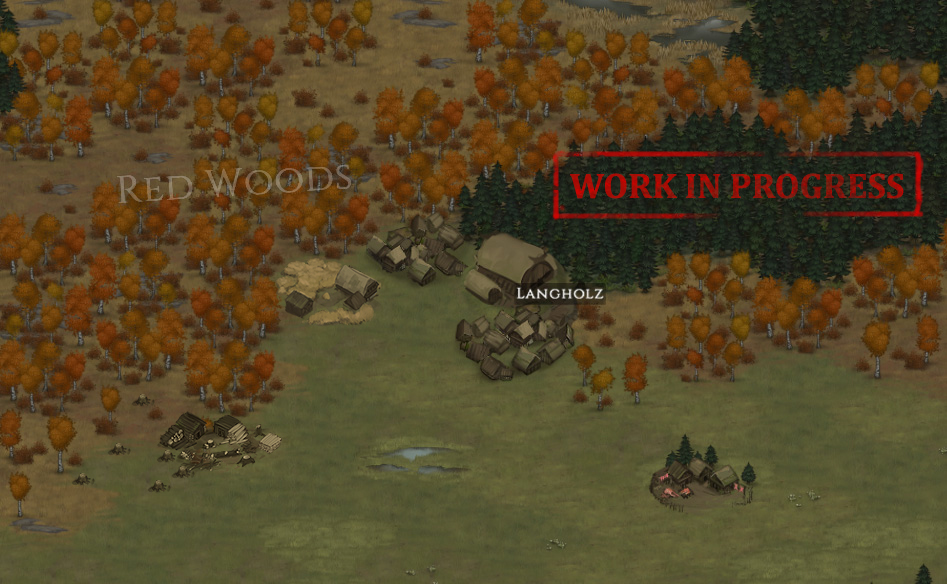 We’re now introducing multiple human factions to the game. No longer will there be just one implicit human faction – instead, there will be multiple ones each with their own goals and competing with others by means of diplomacy, intrigue and warfare. And it’s you, the player, navigating their sea of schemes trying to make a living as hired swords. As we’re tilting the focus of the game more towards interacting with these factions, you’ll also be fighting more and different human enemies, and we’ll convey more story via completely reworked contract mechanics.

These factions come into the game as noble houses each with their own description, motto and family crest. Each of these factions will have their own, procedurally generated leaders that can also appear and be even killed on the battlefield. 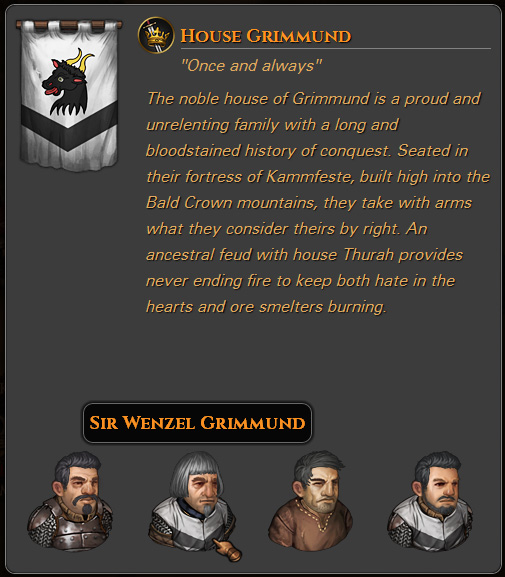 There’s a couple of issues we have with how contracts work in the game right now. They’re too few, too simple, too repetitive, too static. That is why we developed a completely new contract system for the game where contracts can branch out in different ways, take surprising turns, offer various rewards and can have various success or fail conditions.

Contracts are offered to you in settlements all across the land. Some are concerned with local problems, issued by single settlements that require your services, and some are of more of a global nature and offered in all of the settlements that belong to a particular noble house.

Here is an example of how the flowchart of such a new contract may look: 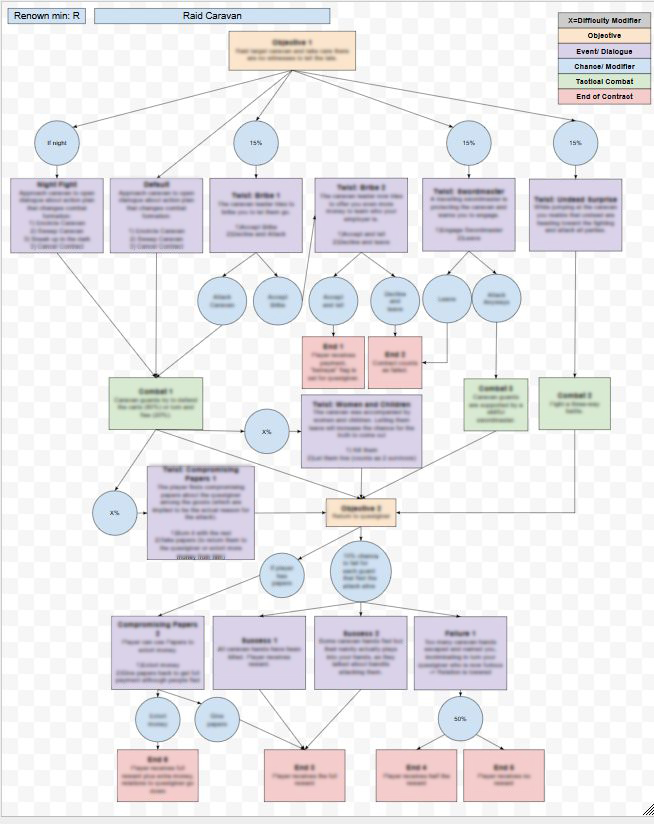 On top of the above additions we will have a couple of more things in the big worldmap update. Right now it is rough to say how much time each will take so we just listed the ones that will definitely be in the update. Make sure to follow our weekly developers blog updates to always get the latest news on the development and the exact date of the release!

Its like you make a complete new game, very promising keep it up !