As the game moves closer to its release, we take a look at what has been accomplished over the course of the last month! Lots has been done, with new mechanics, graphical updates and a great deal of polish to make this a game where you have a lot of fun.

If you have been following the game, you’ll have noticed that the previous title (Tannhauser) has been replaced the more unique Hexterminate, which is both easier to remember, more unique and less likely to cause you to listener to Wagner’s opera when all that you were trying to do was to find some ships to explode.

Other than the rebranding, it has been a very busy month and here’s what I’ve been working on:

A new module that has been added to the game is the Phase barrier module. This adds a new mechanic to the game while bringing the player’s power level up above the average ship in the game, making the early game a more balanced affair rather than something that only hardcore players would see through.

Essentially, this new module is an unbreakable shield which is always pointing at where the player is aiming. However this also means that the player can’t block every shot, so it becomes quite important to minimise flanking manoeuvres from enemy ships while trying to shield yourself and allied ships from hostile fire. Also, because it is a module it does mean that it can be destroyed, so there’s a need to keep an eye on its health to make sure that the barrier remains up.

Exploding ships is always fun but an issue that has cropped up is that at times, when fighting higher-end ships, it was being difficult to figure out how much damage the enemy ship was taking. This was partly because some ships have regenerative armour but the lack of feedback until a module had lost a significant percentage of its health had become problematic.

The reviewed shader now displays scorch marks and increased hull damage every 10% damage, as well as having an emissive layer which makes it more noticeable that damage is being taken, even when zoomed out. 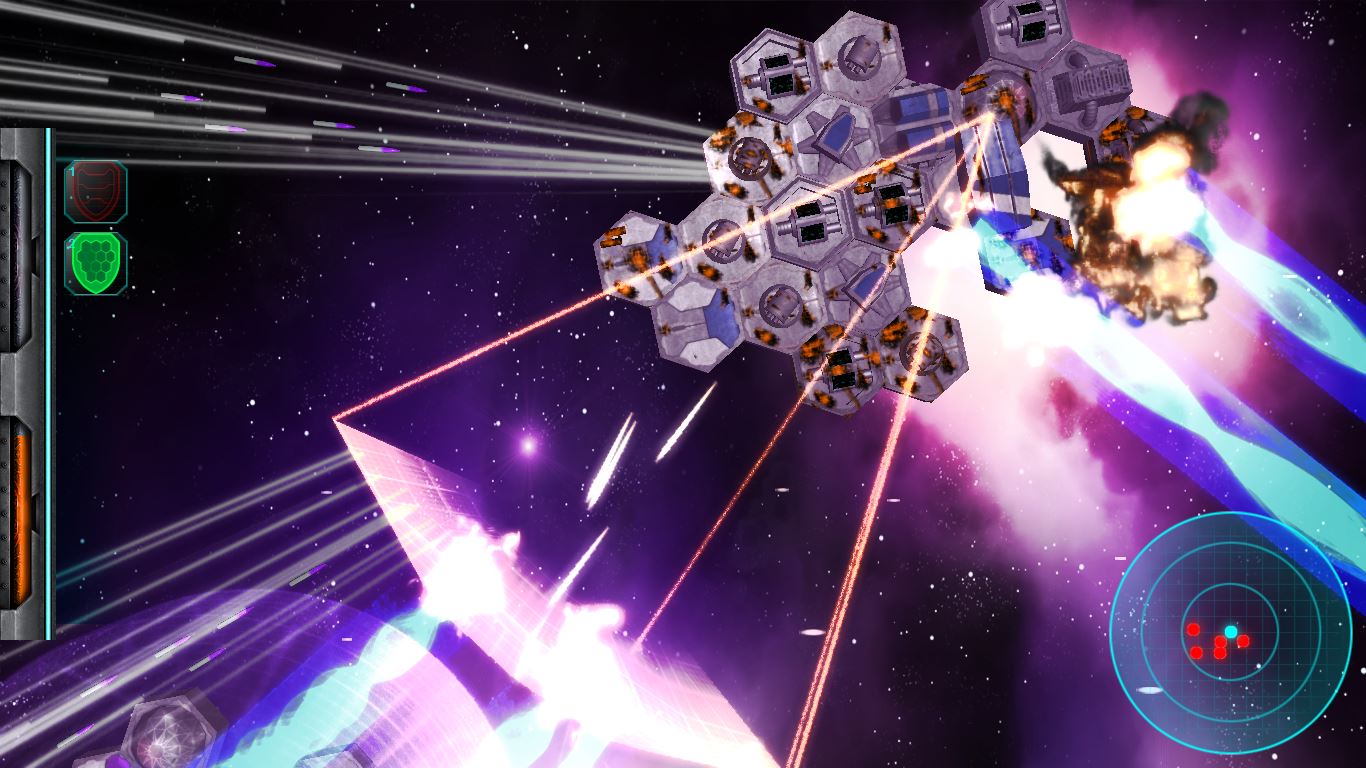 Another addition is modules that when you destroy a module, you can sever the link of other modules with the bridge. Any module that isn’t linked with the bridge will detonate, letting you pull some cool combos when you explode half of the enemy ship by targeting a well chosen module!

Hexterminate gives you an open galaxy from the moment you jump in-game, which gives you a large amount of possibilities - and this freedom includes the freedom to be absolutely obliterated by carelessly wandering into the most dangerous regions of space.

To make the game more friendly to new players, I’ve been developing a “campaign” which provides a guiding thread to optionally follow. There is no need to follow it or to stick with it, so you can deviate from it at will to go find some delicious loot. 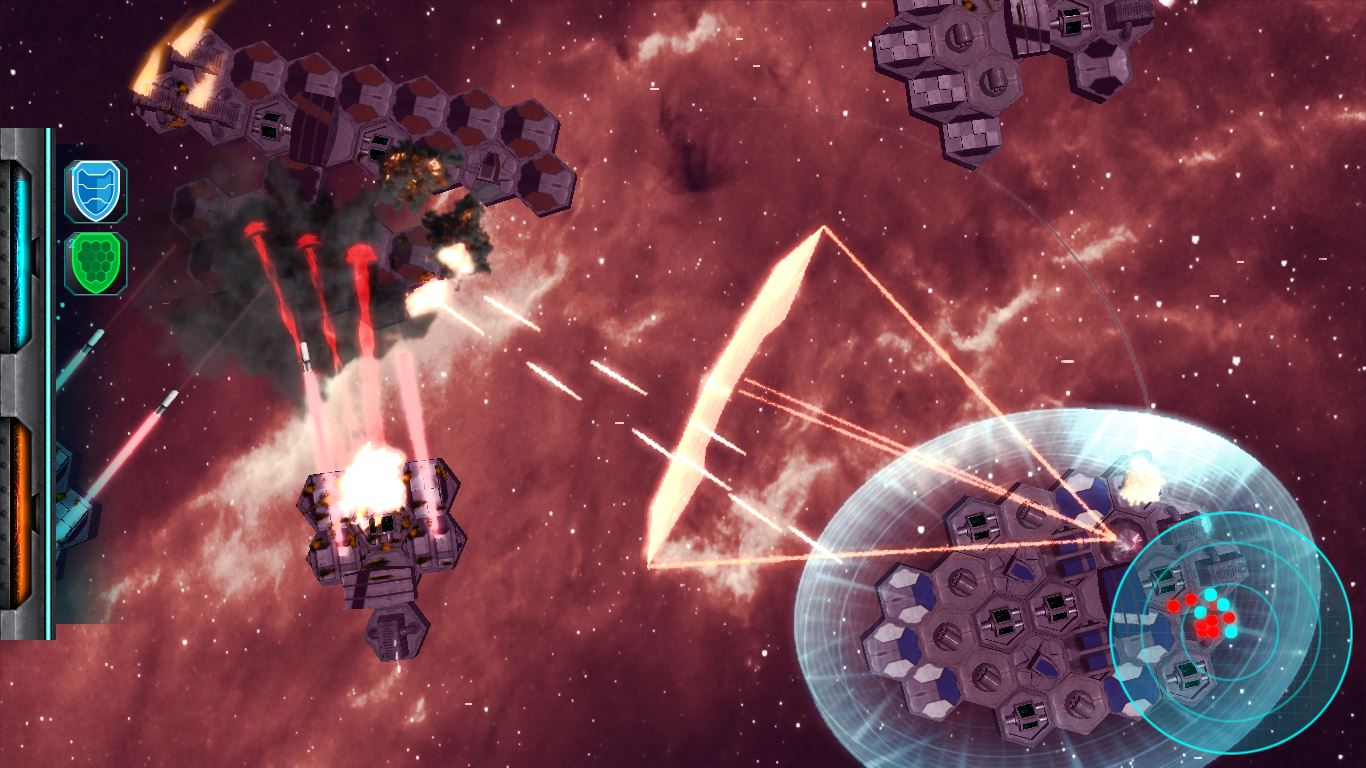 Additionally, a number of new sectors backgrounds have been added, which can be discovered as the player wanders through the various regions of the galaxy.

A game can’t be complete without sound effects, even if it is a space game and have to ignore little things like physics going “you’re aware there’s no sound in space, right?”

Most of the sound effects are now in place, making use of FMOD’s positional audio which made it easy to implement automatic panning and volume rolloff based on distance. Overall I’m quite pleased with it and it makes battles sound far, far more alive. 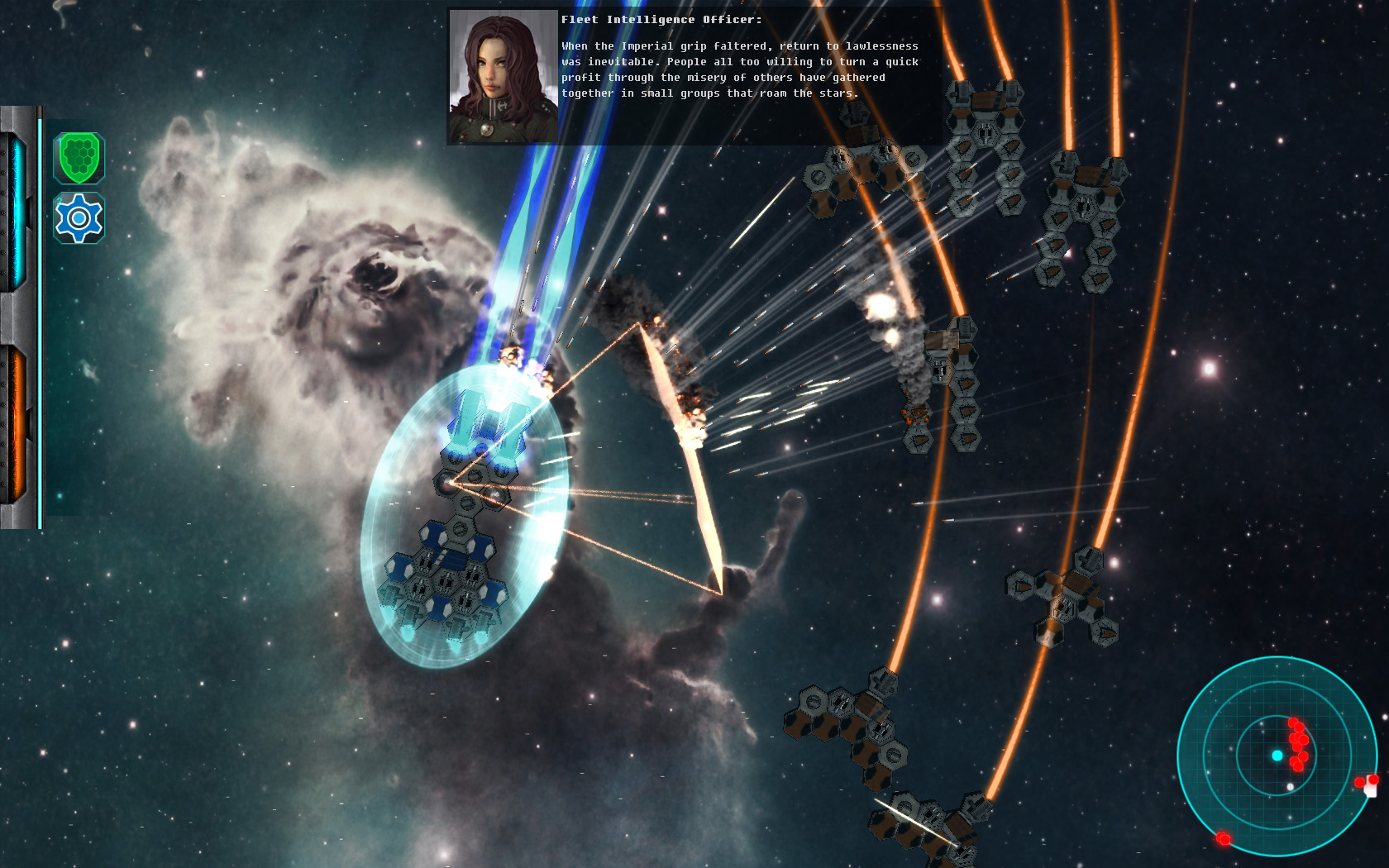 Balancing a game’s is almost always tricky and Hexterminate is no exception to this. The variety of factions, the kinds of ships they use and the large amount of modules that can be used make the task of balancing everything properly a fairly time consuming one. Overall the pace of the game has been slowed down as ships were exploding too quickly, which made it both difficult for the player to manage to pull successful, higher-risk raids into hostile sectors and fairly frustrating to try and keep a fleet’s losses manageable.

Additionally, most ships of the Ascent and Iriani factions have been redesigned and made more specialised. The Iriani in particular remain, as before, terrifying: attacking their territory is not for the weak of heart or for those afraid of losing ships in the process.

Of course that over the campaign you’ll have to conquer their homeworld but hey, no one said that the life of an Imperial captain was an easy one. 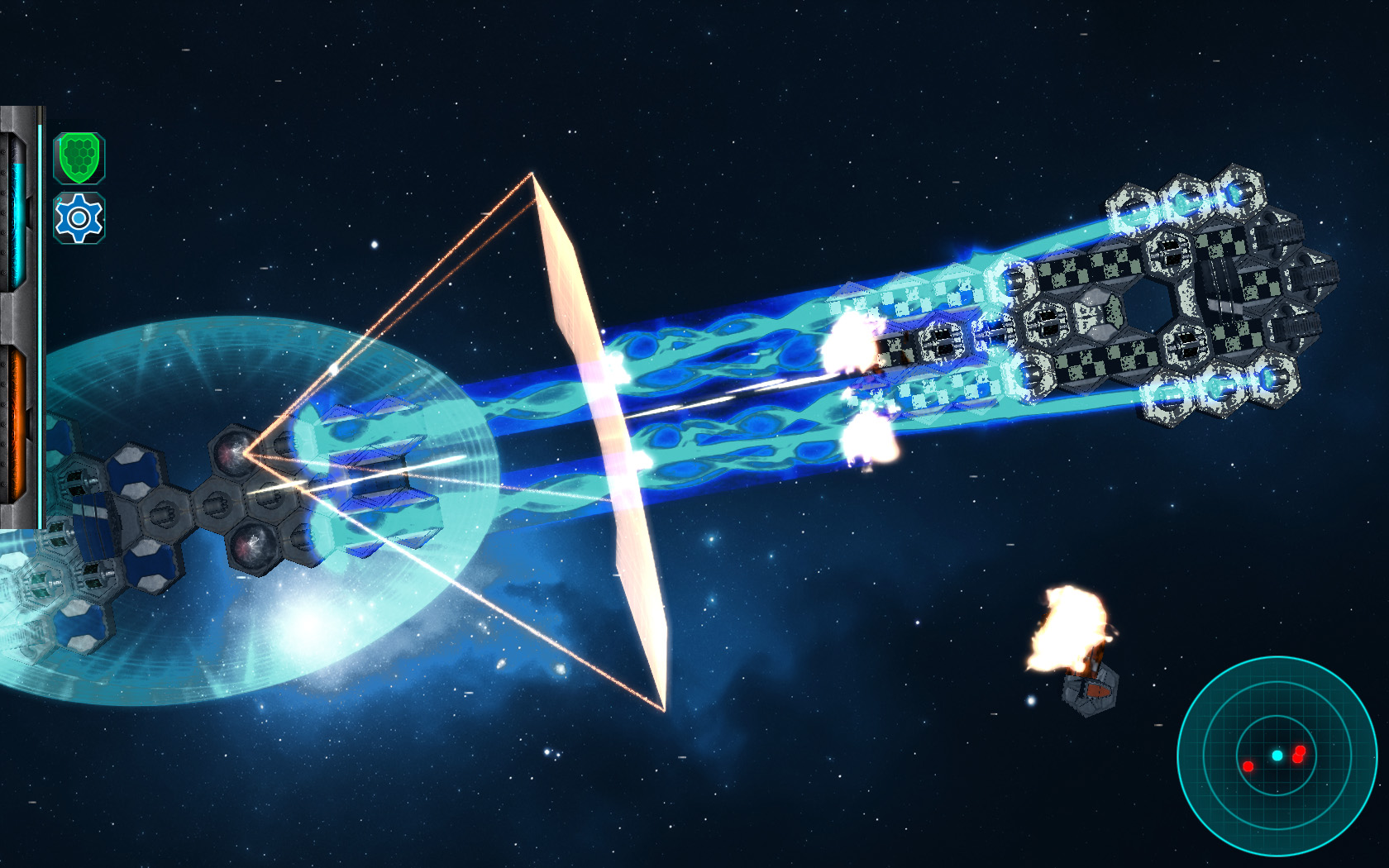 There is still a fair amount of work to do in this but all the systems are in place, so far guiding the players through the Unaligned Sectors and through fighting off the Raiders. Three more factions still need to be covered, which should lead the bulk of development until the end of December. 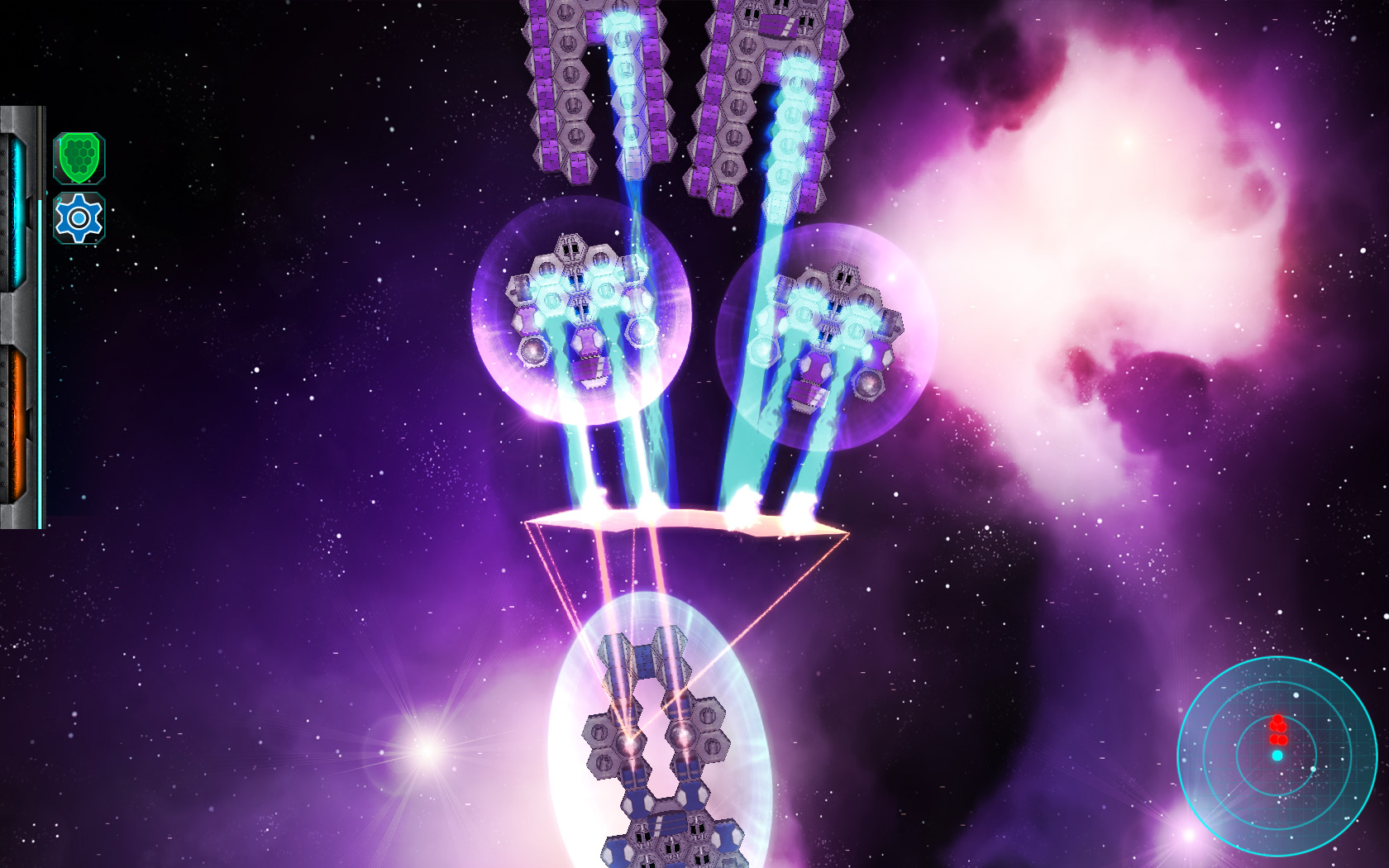