The next stage of combat in Voidnex:Frontier, showcasing a video of new effects, UI and multiple ship combat.

Since our last post we have been working tirelessly using the latest RFDM process (redbull fuelled development methodology) to complete and polish one of the core systems in Frontier, namely the combat system.

While there are many other facets to Frontier, the combat system represents a huge chunk of gameplay, as well as a potential stand alone demo for you to play with. 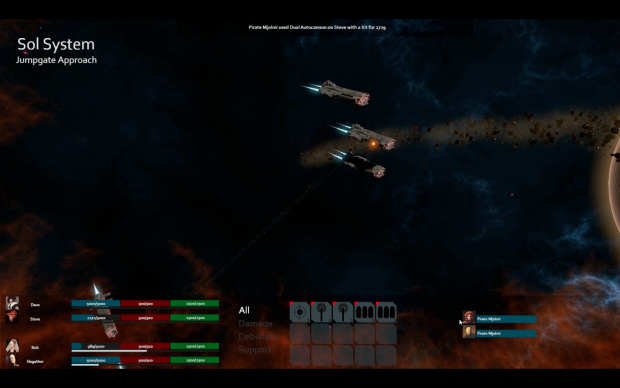 This poor fellow is about to suffer an unpleasant fate

Firstly this week we spend an unseemly amount of time modifiying the UI and backend systems to make it more flexible and fast acting, due to the hectic nature of combat (unless you turn the difficulty down of course!).

As well as that we introduced some of the party support skills (the video below only showcases a shield recharger module, with a very simple effect), but resistance amplifiers cover system, spider tanking systems and several others have had groundwork code put in place.

We also added effects for a new weapon system, the deadly Missile Launcher which deals an uncommon damage type that can cause havoc on un-resistant defences; as you can see from the video below we also completely redid explosions! (goodbye horrible blue spinning star abomination) :)