Today on the 69th anniversary of the Normandy landings we present the first proper look at our British infantry who landed on Sword, Gold and Juno beaches. We also look at the staple firearm of the German army at this time, the Mauser Kar98k.

Today on the 69th anniversary of the Normandy landings we present the first proper look at our British infantry who landed on Sword, Gold and Juno beaches. We also look at the staple firearm of the German army at this time, the Mauser Kar98k.

The K98k rifle was the last in a long line of Mauser bolt action rifles, dating back to the M1871. It was a average performing 5 round bolt action and with over 14.6 million produced, served as the main rifle of the German army throughout the Second World War. Despite attempts at semi-automatic rifles, the German army never had a real reason to upgrade from bolt to semi-automatic actions, due to their focus on the machine gun element of the squad. Thus the K98k was relegated to a secondary defensive role for the rifleman, and there was not a serious attempt to change this until the STG44 began to appear. 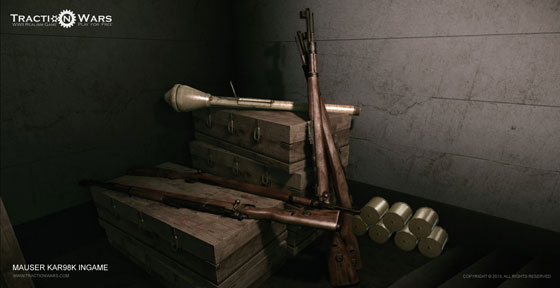 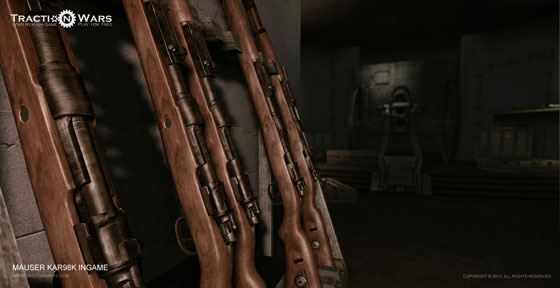 The British Soldier came ashore on D-Day as the vanguard of the last large scale army the British Empire had to offer. With the Empire bleeding itself dry both financially and in manpower across numerous fronts, the British soldier knew that he could not afford a defeat on the shores of France. Their equipment had changed extensively since they were last fighting in Western Europe: rifles, gear, and uniforms had all been simplified for mass production. The British soldiers of 21st Army Group represented the last gasps of great power status from an empire on the verge of crumbling.

Here we can see, modelled for Traction Wars, representations of members of the 3rd Infantry Division I Corps, as they would appear in the first week's fighting in Normandy. On the far left is a Corporal who would act as the squad commander. He is normally armed with a Thompson or Sten SMG, however here he is carrying his Webley pistol and a smoke grenade. He wears the Mk.III Turtle helmet and a bandolier for SMG magazines. To his right is a rifleman wearing a camouflaged Mk.II helmet and carrying the standard Mk.4 No.1 Enfield Rifle. To his right is yet another rifleman, this time about to throw a Mills Bomb. Finally, in the prone position, we have our Bren Gunner. He wears a Mk.III Turtle helmet as well as the P37 large pack on his back. Their web gear weighs anywhere between 9-23kgs (20-50lbs) depending on their packs and role in the squad. Most men carried between 2-3 day's emergency rations in case they were not able to be supplied from rear-line cooking units

Last, but absolutely not the least, we wish to give our recognition, admiration and respects to the American, British, French, Polish, Norwegian and Australian soldiers, sailors, and airmen who participated in the Normandy Landings. Their sacrifice helped to free Western Europe from the grips of tyranny and must remain unforgotten in the annals of history.

The team is always on the lookout for fresh talent to join us so if you have experience in modelling, mapping or programming and are interested in working on a friendly and professional team then please head over to our recruitment page to find out more.

For the very latest media and updates follow us on the social networks below, as well as our community forum and our new expanded media gallery.

I know I'll get some form of hate for this but I believe that the German soldiers deserve our respect just as much. Even though they were on the side of oppression, hardly all of them were Nazis. They were just serving their country. With that said, I'd like to say you've done a lovely job here and I wish you a happy 69th anniversary of the Normandy Landings.

Yes. They were humans too.

Also I'm very glad this is something about D-day and isn't about Omaha Beach.

You brought so much to this discussion

Poor kid, that happens when you are brain washed by mass media.Calling german soldiers...nazys.Even Von Rundstedt wasn't a nazy,he just served his country,not an ideology.How many neurons do you have?And dont tell me about dead ones!

Wow! Awesome update! Everything looks beautiful, except the Enfield in 3rd person is too small compared to the playermodel? Or am I mistaken?

Great model as always, but the cartridges look...off, somehow. A bit too thick, maybe?

Love the models, however I find the shoes on the British models looking a bit 'off', I think maybe its the length or how narrow they are. Also shouldn't the colour be black?

Hey... Canada took part in the Normandy landings too :(