However, as usual with huge international events, nefarious ne'er-do-wells plot to disrupt the pageantry and sportsmanship. Despite his name, Dr. Evil escaped the surveillance programs put in place by the organizers. Now he has made off with the Summer Games Flashlight, the Duracell-powered symbol of sport (and convenient portable lighting when it gets dark).

The Crusaders have been hired to not only locate the aforementioned flashlight but also protect the event. That responsibility starts with the safe conduct of two new Crusaders. 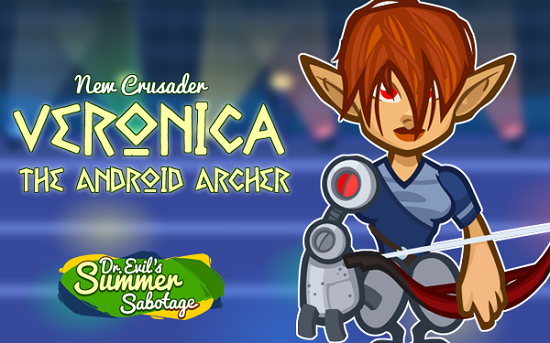 Veronica, the Android Archer, certainly won't fail the doping tests, but something suggests she's going to have an unfair advantage in the archery competition. We can't quite put our finger on it. Whatever.

For the first objective, the heroes must escort her to area 100 as part of her training. Unfortunately for the Crusaders her Russian-purchased hardware is malfunctioning shooting sparks at the rest of the formation every 30-45 seconds reducing the global DPS by 50% for 15 seconds at a time.

At area 100 she'll return from the maintenance bay ready to aid the Crusaders. Her upgrades buff those around her with increasing damage based on the number of other robot Crusaders in your formation. 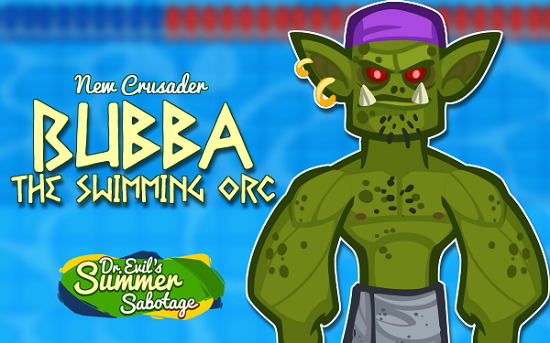 The second Crusader is Bubba, the Swimming Orc. With a name like that, it's no wonder Bubba didn't do so well at other disciplines like the equestrian trials and hockey.

Bubba is excellent at swimming. He's so good, in fact, he's earned himself a fervent following of fans who attack the Crusaders to get to him until they reach area 100.

Once recruited, Bubba uses his superior swimming ability at level 25 to buff the DPS of the Crusaders behind him by 25% for every adjacent Crusader. At level 100, Bubba will increase the Gold Find of every Crusader behind him not affected by his Synchronized Swimming ability by 10%. 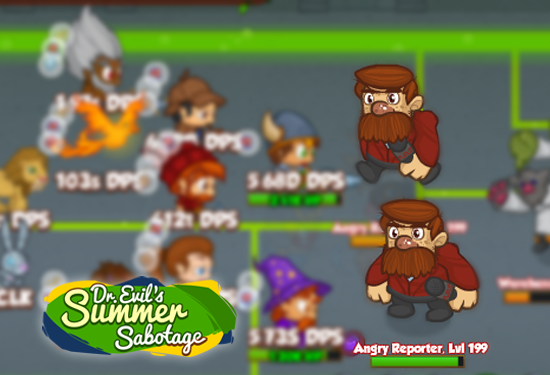 The remaining three objectives are Podium Finish, Press Junket, and Corrupt Officials. In Podium Finish three medals take up formation slots all the way to area 150. in Press Junket angry reporters demanding explanations for your lackluster performances attack the Crusaders. Block them all with 'no comment' and swift cuffs to the head. The final objective will see corrupt officials bribe random Crusaders to throw the race all the way to area 250 and reduce their DPS. 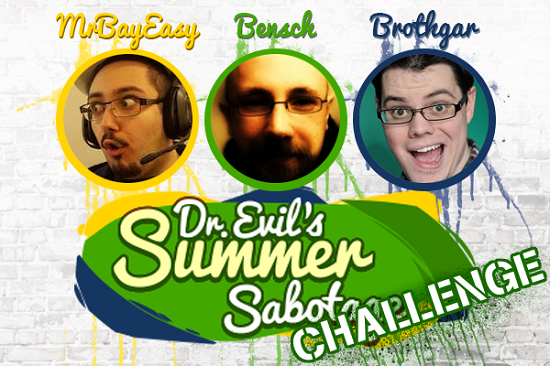 In the spirit of competition the world over right now, we have a special announcement. Three of our good friends on YouTube are going to be competing against each other to finish Dr. Evil's Summer of Sabotage event with the winner earning a free jeweled chest for each and every one of their subscribers.

Hailing from the United States is MrBayEasy. An idle gamer of Olympian ability,MrBayEasy has been playing Crusaders from way back in October last year. From Germany, Bensch is another giant of the idle games pantheon with more than 130 Crusaders videos under his belt on his channel. Last, but by no means least, we have Brothgar also hailing from the United States. Brothgar's idle game pedigree is uncontested with many years of playing both Crusaders and other games on his channel. 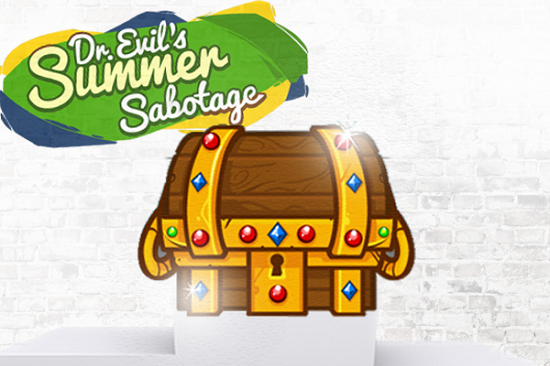 As mentioned, the winner will earn a free jeweled chest for every one of their subscribers!. The rules are simple, the contender who finishes all five objectives in the event in the shortest time will be named the champion. Due to time zones and other commitments, we'll be recording each of their start and finish times as opposed to the launch of the event.

We're excited and honored to be hosting such illustrious company and wish each competitor good luck. We'll announce the winner in the coming days.