Posted by UltimaRatioRegum on Jul 24th, 2016

This week I’ve been adding in a truly titanic amount of speech variation into the game. I’m only now beginning to realize the size and scope of this task, given the level of variety and interest and complexity I want to include, but at this point it’s close to around ~1/3rd of the default conversation options done. There’s a vast number of archetypes, a truly gigantic number of clauses and descriptive modifiers (a comment a character might make about the word “world” if they’re from a particularly isolationist nation, for instance, which might be something like “frightening in its size and distances”). I’ve already written several thousand of lines of speech, variations in those, templates, words, clauses, kennings, all kinds of stuff, and written the (actually remarkably simple) code that pieces them all together. I’ve reached the end of all the “default” questions which you can ask anyone (and their answers), and I’m now moving onto the class-specific questions (and their answers), and then after that onto the special answers that change their sentence structure, not just their sentence content, depending on the NPC. By this I mean, you can always answer the question “What is your religion’s most sacred relic?” with an answer of the sort “Our most sacred relic is [x]”. However, a question like “What is your opinion about the ongoing war?” cannot be answered with a single sentence with words switched out, so needs a more complex set of answers tethered to the opinions of that NPC.

There basically hasn’t been much new coding going on since last time, so below you’ll find two conversations I had with different people, and how different they turned out (so the same kind of thing I showed off last week). You’ll notice that certain words get “expanded” upon, such as that “in which we all serve and are served” bit of the first picture below; these are bits of flavour text heavily dependent of course upon religions, cultures, backgrounds, etc, and these are one of the major things that will give you a hint about the background of the person, when they elect to give you a bit of their perspective on an issue you’re discussing. By the end of this process there will be an *incredible* number of these little expansions; as above, I’ve only done about 1/3rd of the default conversation options so far (not to mention negative replies, replies that can’t have a default form, and other stuff) and already there are several hundred of these. Naturally some political beliefs are easier to find expansions for – consider how much of a conversation someone from a pacifist nation would comment on, compared to how much of a conversation someone from a planned economy nation would have a comment relevant to planned economy to make – but I’m trying to come up with expansions for even the less-obvious ideologies too.

Anyway, here’s two examples of one conversation again, and you can see these are already more complex than last week: 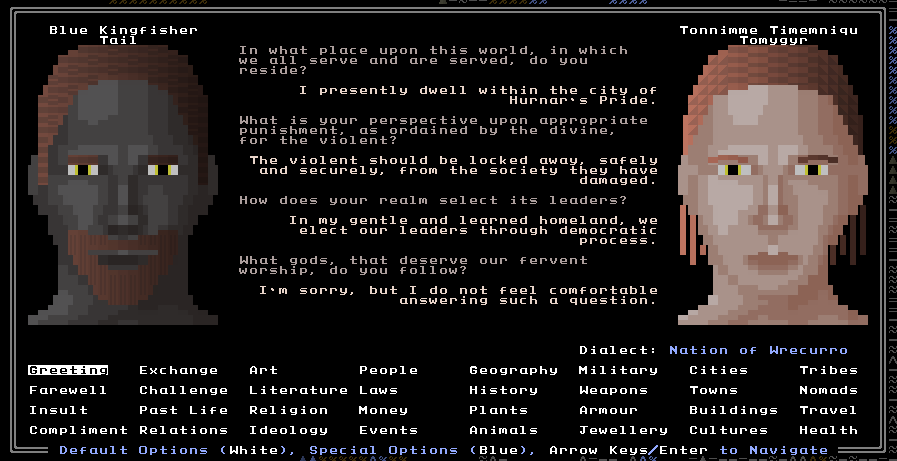 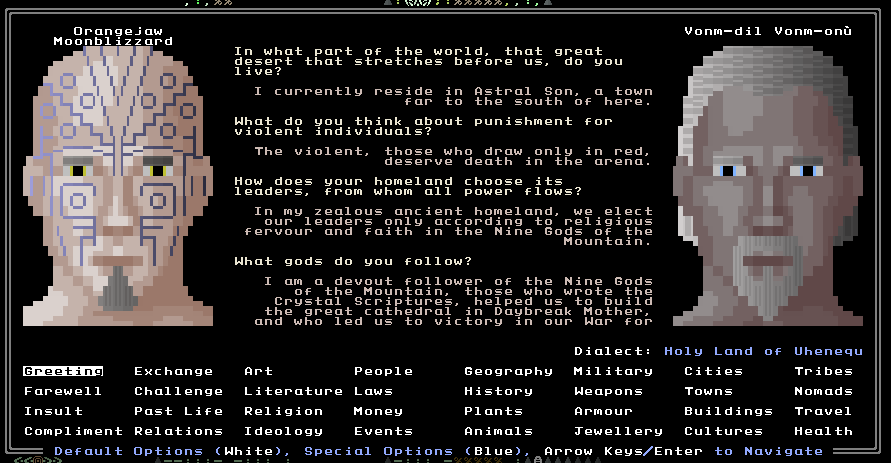 I love how distinctive these are, and how you can even in just a few snippets of conversation start to guess at some of the beliefs and backgrounds of the people and their nations. In that last one you can see that we need a scroll bar for the conversation window, which is coming shortly.

For next time, I’ll be continuing to put in the massive databases that underlie the sentence generation system. I’m also starting to put in the first parts of two next things, both designed to enhance the smoothness and realism of the conversation system, instead of reducing it to what can look like a question-and-answer session. Although I’m super-proud of the above screenshots, they ARE quite question-and-answery, and this needs to be changed, and that’s what these two new elements will help us towards (the “how interested am I in this conversation” meter will be coming later). These two new elements are:

These do require a bit of work, and I want to get all the “default” stuff done first, so I won’t mention these for another week or two, but I wanted to note that I’m aware the structure and flow of conversations needs a little work, and I’ll be working on that soon.

Also, rather excitingly, I’ve been commissioned to write a four-part series on qualitative procedural generation for Rock Paper Shotgun! Societies, practices, cultures, beliefs, and so forth, and how to integrate them into gameplay. I think one part will be going up each fortnight for the next three fortnights, but here’s the first one.

Generation Next, Part 1: How Games Can Benefit From Procedurally Generated Lore

I hope you get more assignaments like those ouo (And if paid, even better) soo your work is know.

Any change of creating random pools for generated books text? like to read them, instead of just reading what the charater have to say about them (The description)

Thanks! I have been working on some other freelance writing jobs, I'll keep them in the updates as and when :). Generated books: absolutely!