Posted by UltimaRatioRegum on Mar 20th, 2016

To anyone who sent me an email about playtesting and I didn’t reply: I’m very sorry! I think I’ve caught them all, but I’ve had a lot, and my inbox has recently been blasted with spam, so it’s possible I missed one. If so, rest assured it was entirely accidental and nobody has been shunned on purpose, and I *massively* appreciate every single offer!

But as for this fortnight’s update: YES, as I’m sure you could guess, I’ve done more work on AI, but my goodness, we’re getting close to an acceptable level of completeness here for the 0.8 release. I just realized with something of a shock how close I am to having this release’s AI finished: Chieftains, Priests, Archivists, Mercenaries, Clerks, Diplomats, Farmers, Guards, ordinary citizens, Innkeeps, Jailers, Merchants, Slaves, Tellers, Servants and Prisoners all work! If I can make sure officers work, and all the NPCs incastles and monasteries work, it’ll be done! Then I’ll do speech generation, then release 0.8, then return to finish off the more obscure NPCs – blacksmiths, delegates, explorers, gladiators, and so forth – in a much quicker 0.9. So here’s a run-down of everything this past two weeks, as I enter what I desperately hope to be the last week of concerted AI work in this release. I will be releasing the playtesting release on the weekend of 2/3 April, and I’m probably going for the closed playtest option. For now, though…

Found a few fascinatingly rare errors involving saving and loading specifically when important but non-unique NPCs were next to, or on, a staircase, and were either transitioning to sleeping or transitioning to doing their normal everyday stuff. If next to the stairs they were trying to find a new target when the game reloaded instead of continuing to the stairs, but if they were already on the stairs, they would cause a soft lock with the NPC trying to find another target. I’m pretty certain I’ve fixed this now for all NPCs this might apply to, and if it isn’t finished, they should roll over to a piece of code that will encourage them towards a chair or a bed for a temporary rest, rather than having them lock up the game, so there’s a slightly less-elegant backup solution in there in case the main solution doesn’t work. I went into the basement of a mansion and waited until it was time for the servants to wake up, quickly modified the code to make them all wake up around the same time instead of over a longer period in order to take a nice gif, and voila:

Ambassadors and innkeeps have a similar thing to them – they spawn and sleep on the upper floor of their building, and when they get up, they head downstairs and do their thing, and then return upwards. As far as I can tell (I know I keep putting this proviso on everything I write about AI, but the stuff is so damned complicated that I have to!) ambassadors work correctly, although there remains a tiny issue with innkeeps because in their business day they can sometimes drift onto the upper staircase, and if they decide to go to the upper staircase when already standing on it, they go up but then don’t look for a target, and freeze. Not quite sure why, but for the ambassadors, here’s a quick gif of one turning in for the night:

Clerks and diplomats all now seem to work correctly, using effectively the same code as tellers, albeit with a minor slight difference. They live all over the city, head towards their appropriate embassies, and behave correctly, although there was a really strange issue for a while with the game trying to spawn a duplicate whenever one of them was due to act! Then we had another issue with clerks and diplomats sometimes deciding to sneak upstairs and occupy the ambassador’s bed! Cheeky buggers. All very odd, but now resolved.

To my amusement, I realized I’d neglected to get monastery names generating! I’d just left them with a placeholder, “Monastery of the Six Halos”, and entirely forgotten about them. I returned there this week and spent an hour putting in a robust name generation system which draws upon the specifics of the religion in question – whether it worships an animal god, a demonic god, a lovecraftian god, an “ordinary” god, a pantheon, etc – and then churns out a series of related but distinctive names for the monasteries in each civilization. Here are a few groups of examples: 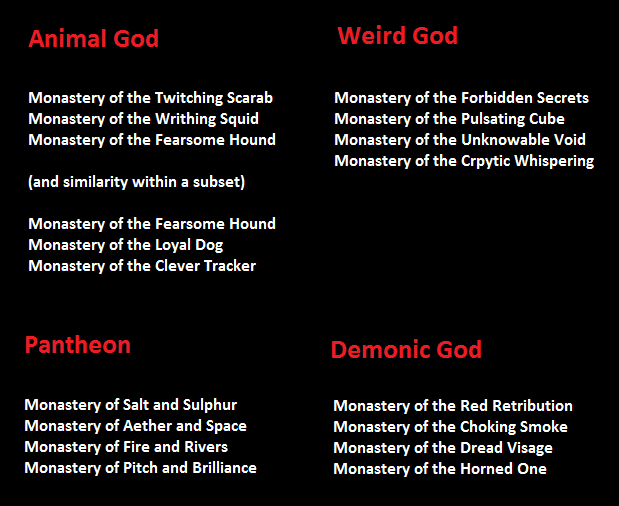 Archivists weren’t behaving perfectly and couldn’t find their way back to their desk after a good night’s sleep. Now they do!

Farmers now farm! You can head into a farm, and for each farmhouse, we’ll see a farmer doing their thing, which basically involves moving from point to point in the fields, and only moving a few tiles at a time. By this, I mean they select a group of crops to work on, work there for x turns, then move no more than 5 or so tiles in any direction onto another crop, tend that, and so forth, and so you see them slowly moving around their fields. At the appropriate time, they head home. Here’s a gif of a farmer… farming… which is about as exciting as you’d expect, but hey, it works:

And goes to their farmhouse:

And going to bed:

Innkeeps are now in the appropriate place in the day, and at night. As above, innkeeps use pretty much the same body of code as ambassadors since they sleep in the building they work, they sleep on a floor above their working floor, and so forth. At the moment they should come down stairs in the morning and tend to the bar. I’m also considering using the graphics for the beer barrels stored in the basement for barrels more generally, and adding those into the generation algorithms for some other buildings to add some variety to the standard chairs/tables (i.e. use them as food storage barrels and that kind of thing). For now, people do still come into the tavern when the innkeep is asleep, but that can be fixed some other time, and definitely fits into the “long set of very minor issues” category that I’ll handle in the future. I assume they just sit around and drink their drinks very slowly until dawn once more spins around.

The final AI update before the playtesting release, and hopefully pretty much all the AI needed for 0.8… and what a relief that will be!

When are you going to add combat system. Any plans on how it will work? Some Dwarf Fortress similarities?

Not for a little while, since it isn't the focus of how you play the game - but it'll be something like a turn-based Dark Souls!

So rolling around enemy? No decapitations too?

Ha, no, I meant more in terms of timing, use of shields, move-sets on weapons, that type of thing. Decapitations... maybe.

And, what can you say about main purpose of the game. I know, it's about cognition of life aspects, and other things(yes? :D In the end it appears I do not know? :D, im little bit drunk)
But how it would look like? Talking to npc's, studying their life? I'd like to hear your answer

It's basically solving a mystery, which is hidden in what people say, what items look like, what you can read in books, etc etc. Talking to people will be a *huge* part of the game!