Have a look at how Melon Quest has evolved over time & our decision to transition to Unreal Engine 4. Plenty of delicious 'then and now' comparison screenshots inside!

This is an article we published on our website earlier in the year about how Melon Quest has evolved over time and our decision to transition to Unreal Engine 4. It's filled with delicious 'then and now' comparison screenies.

Haven't seen our recent feature update? We posted an article on Indie DB with a heap of tasty GIFS here.

*Keep in mind that the game has evolved quite a bit since this article was first published and some info/features/visuals have since changed or been refined.
**The article also contains super old concept art.
You'll find info about newer updates at the bottom of the article.

Melon quest was one of our earliest game ideas when we started the Baker’s Dozen in 2014. Initially it was incredibly simplistic. The planned gameplay mechanic would have you play as a sticky creature that could only move left or right and jump up or down with unlimited force to the surface above or below you. 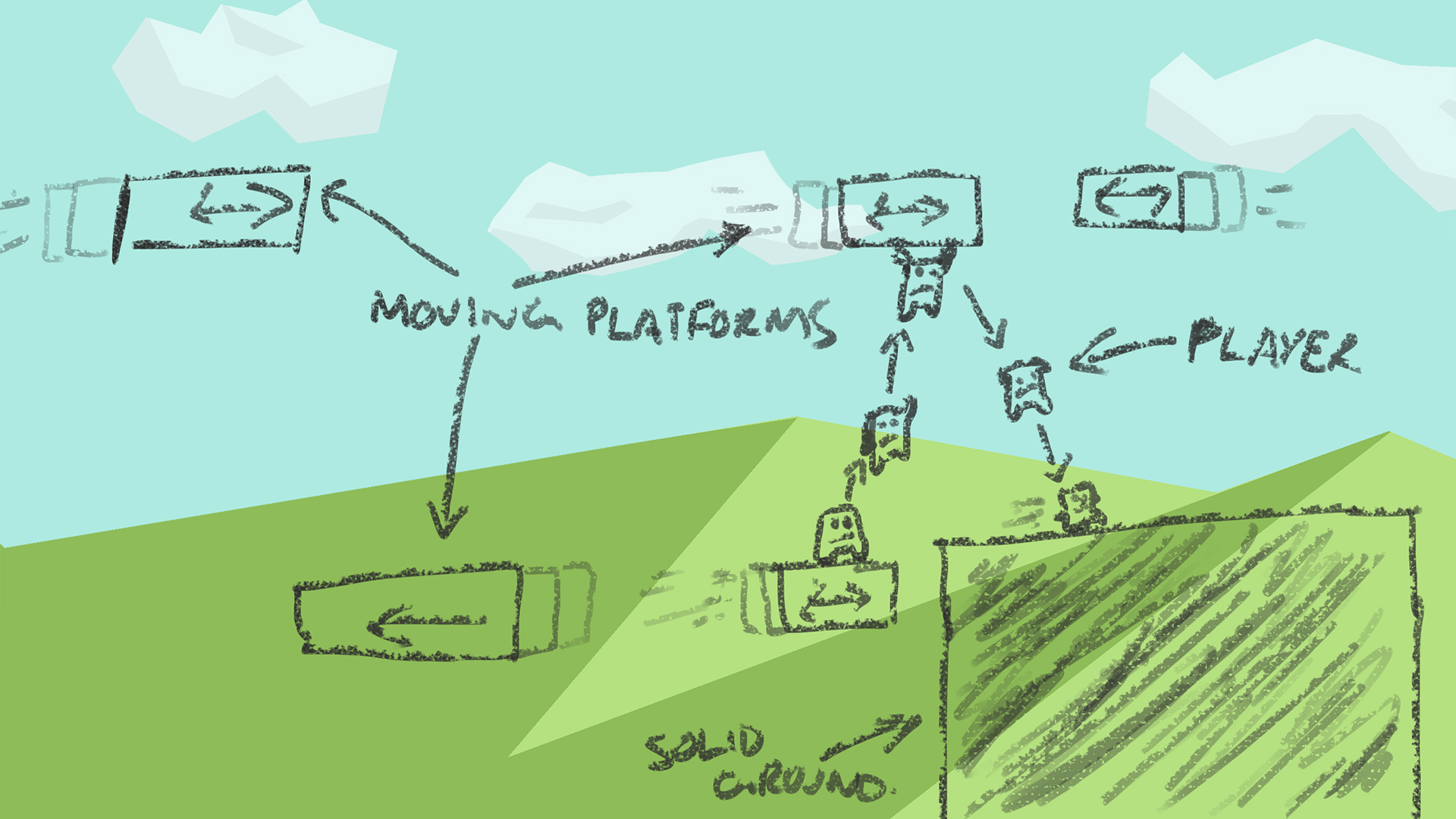 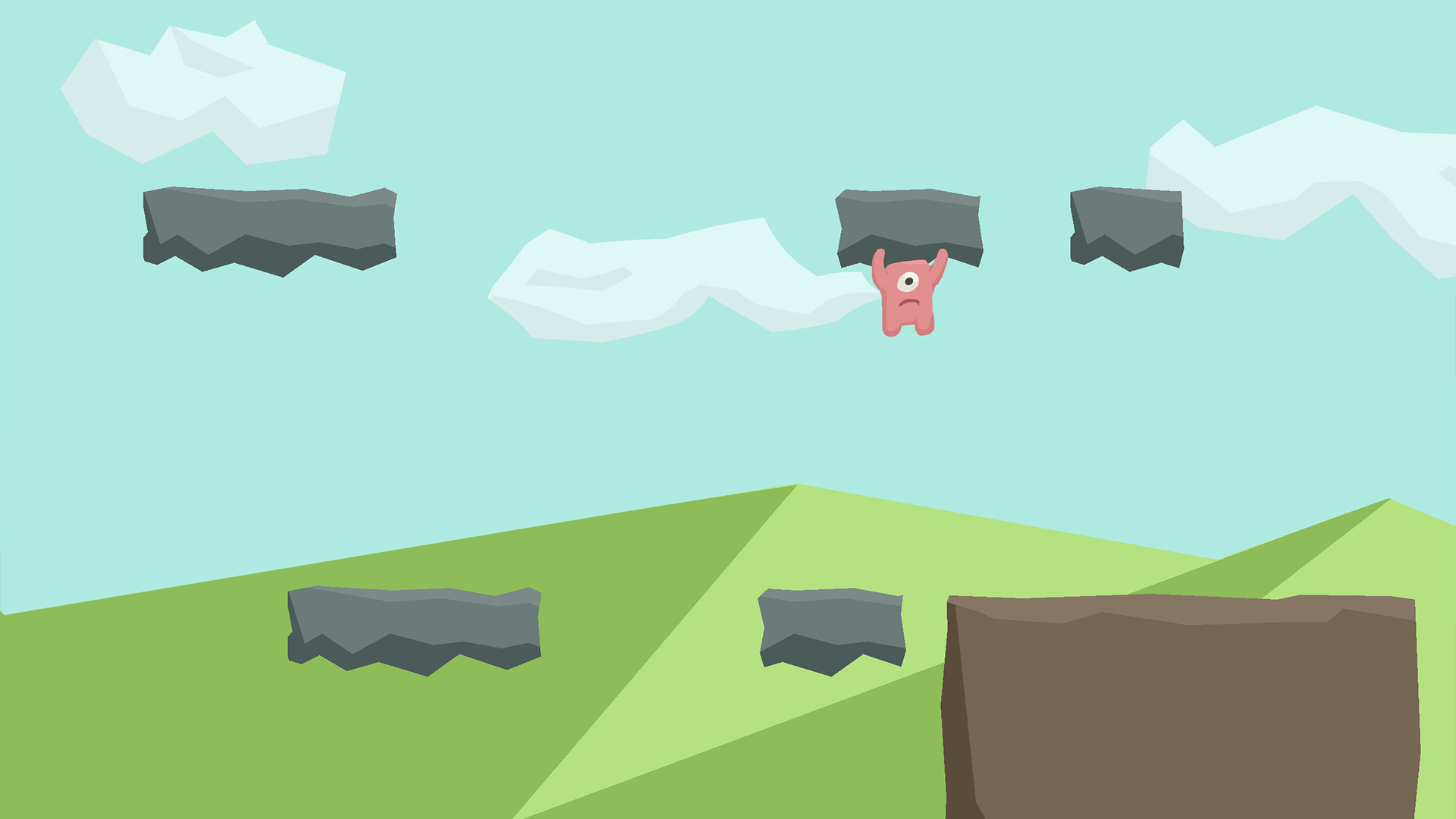 There was no climbing, no combat and no standard jumping controlled by gravity. You could run and jump while avoiding obstacles on the ground and in the air, with a goal to get to the end of each level to chow down on some Melon. The melon eating was just a spur of the moment idea to give the player a goal to reach the end of a level. Originally Melon Quest was planned as a 2D game that was probably most suited to mobile devices.

Like all of our Baker’s Dozen concepts it was a simple idea that would allow us to make a short, but enjoyable game, while keeping on track with our goal and time restraints for the Dozen. 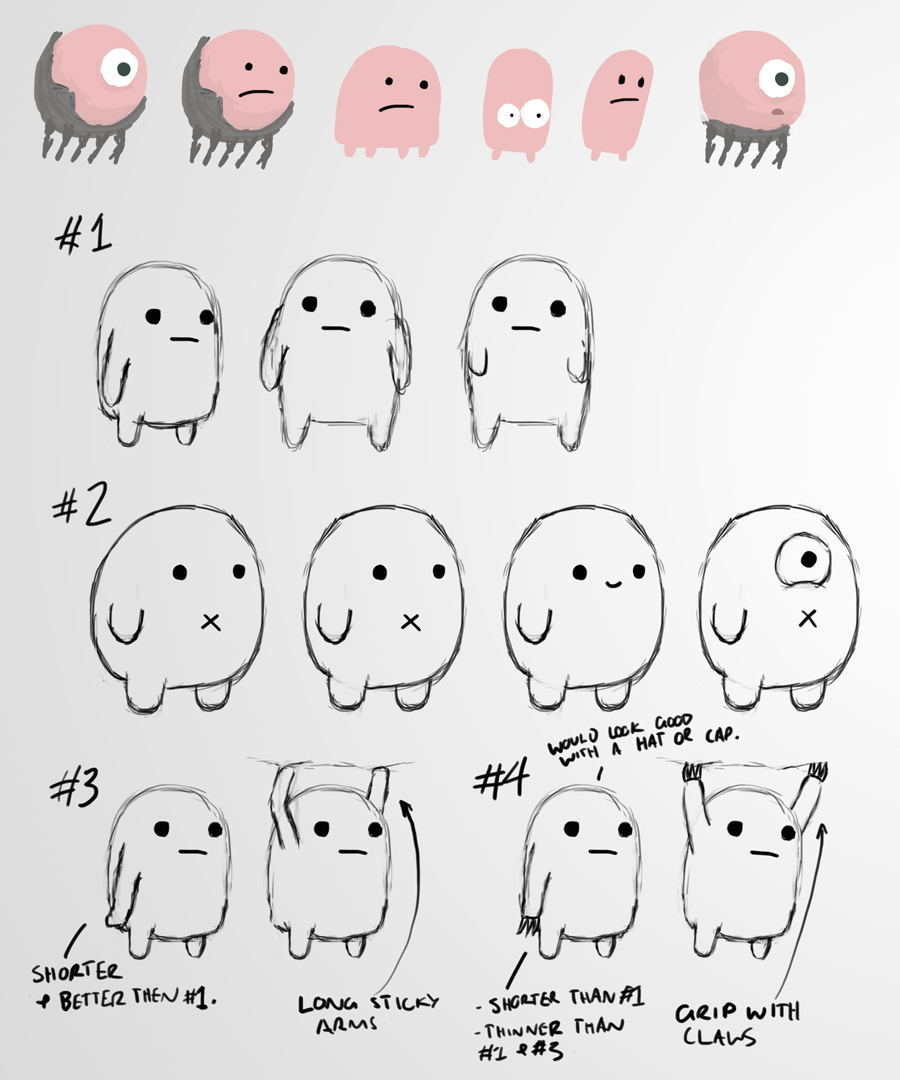 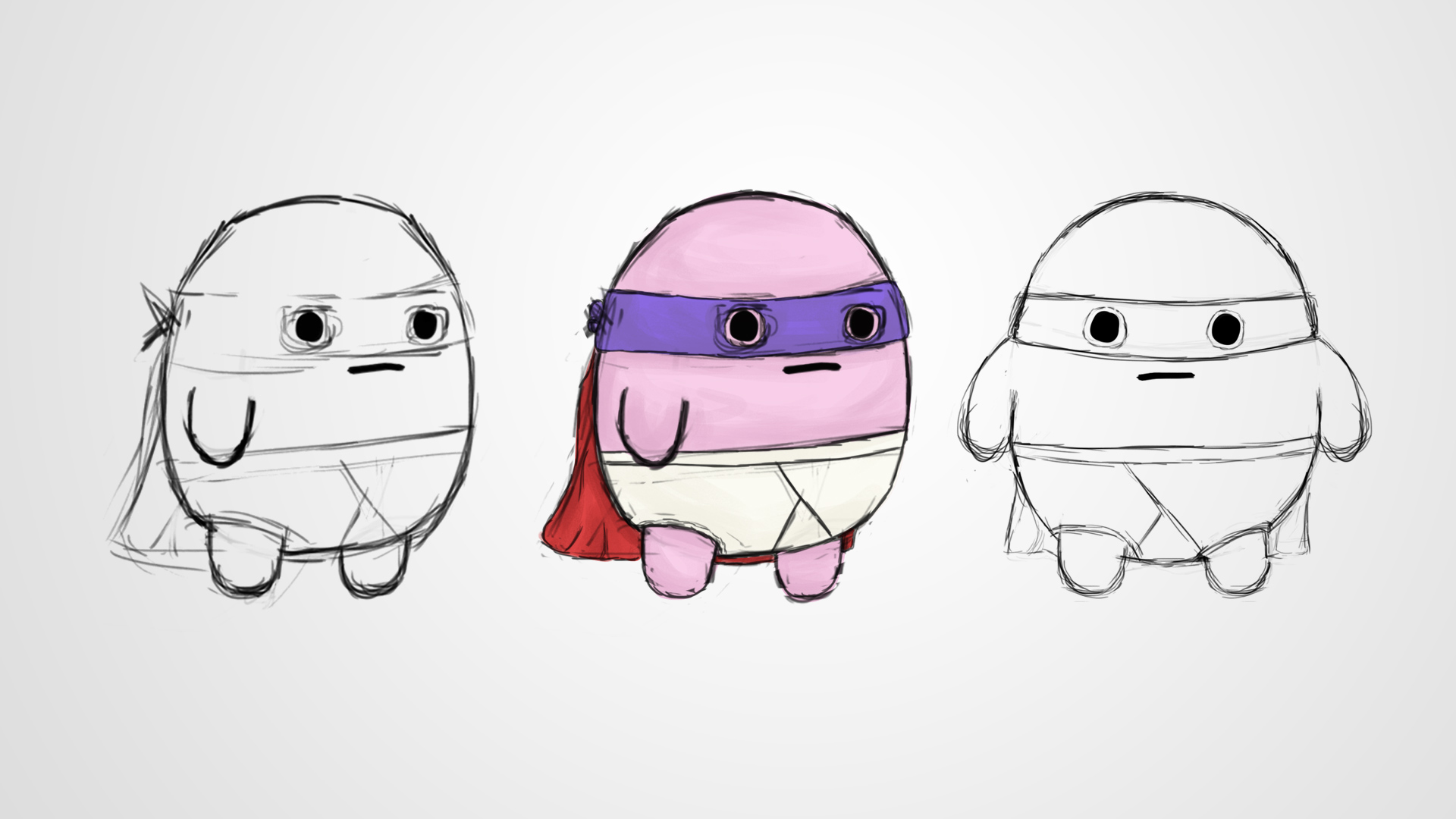 As the concept art came together, we settled on the style of our environments, protagonist and creatures that would fill the world. It became apparent that our simple melon collecting game idea could be so much more.

After various in-engine tests, we decided to make the switch to 3D. Tim created multiple movement prototypes in Unity 3D. It started with the original rigid concept, followed by complete rewrites of the movement with all new features, as we put more thought into making an enjoyable experience.

Melon Quest gameplay evolved from highly restricted movement, to allowing huge amounts of control over your character in the air and on all surfaces, all while spitting pips at enemies and avoiding obstacles. The gameplay now suited precise game-pad and keyboard control. As development continued, a story set in the world of Melon Quest began to come together, along with plans for narration as you embark upon your quest.

Melon Quest had grown into a fast-paced, hardcore 3D platformer, and we became hooked on the gameplay and back story ideas. Development of Melon Quest was pushed back to allow us to complete some of the other Baker’s Dozen projects. We intended to save Melon Quest for the end of the Dozen to devote more time to the features it needed. Running out of time with the Baker’s Dozen, Melon Quest was never released to the public. 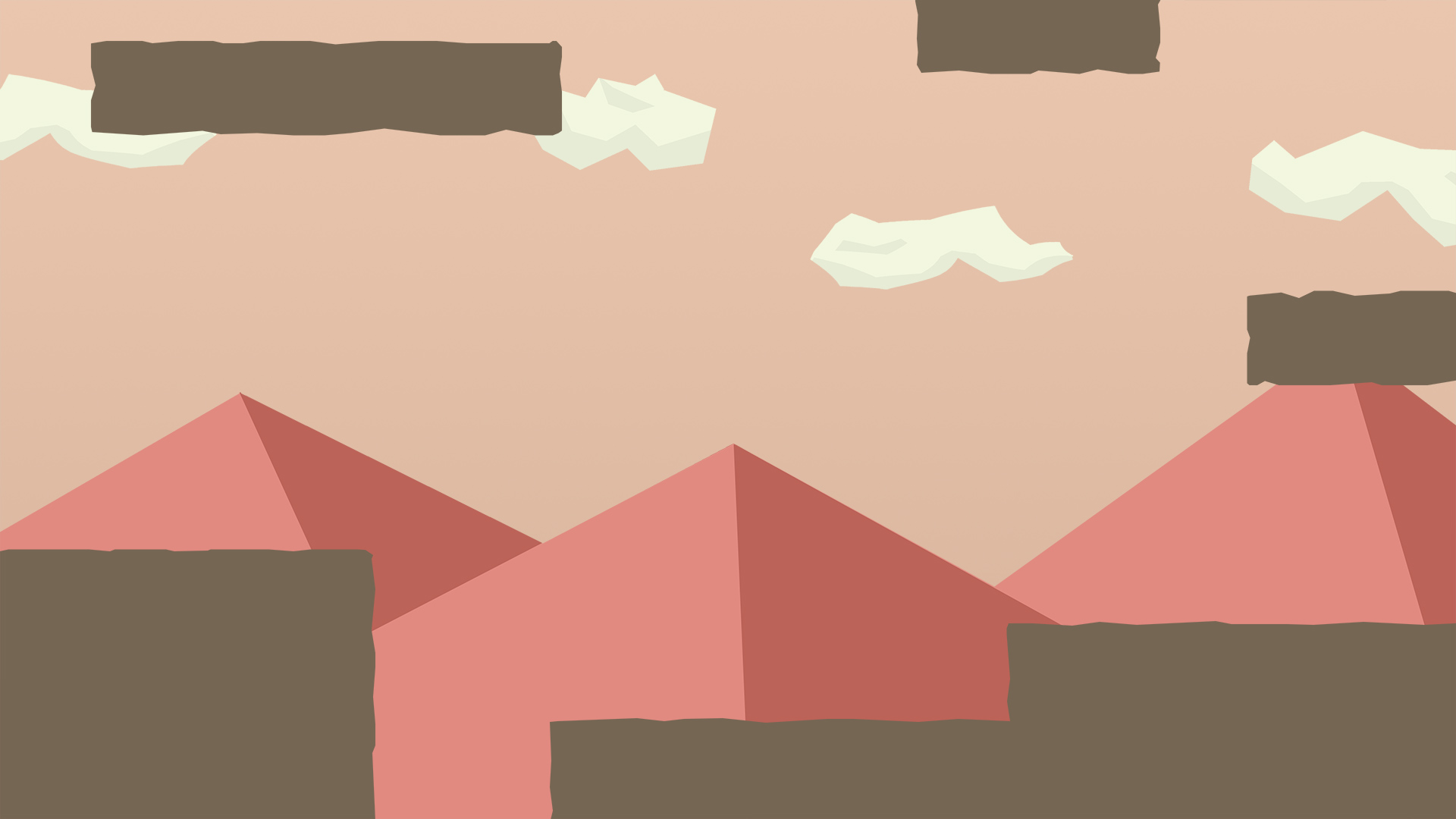 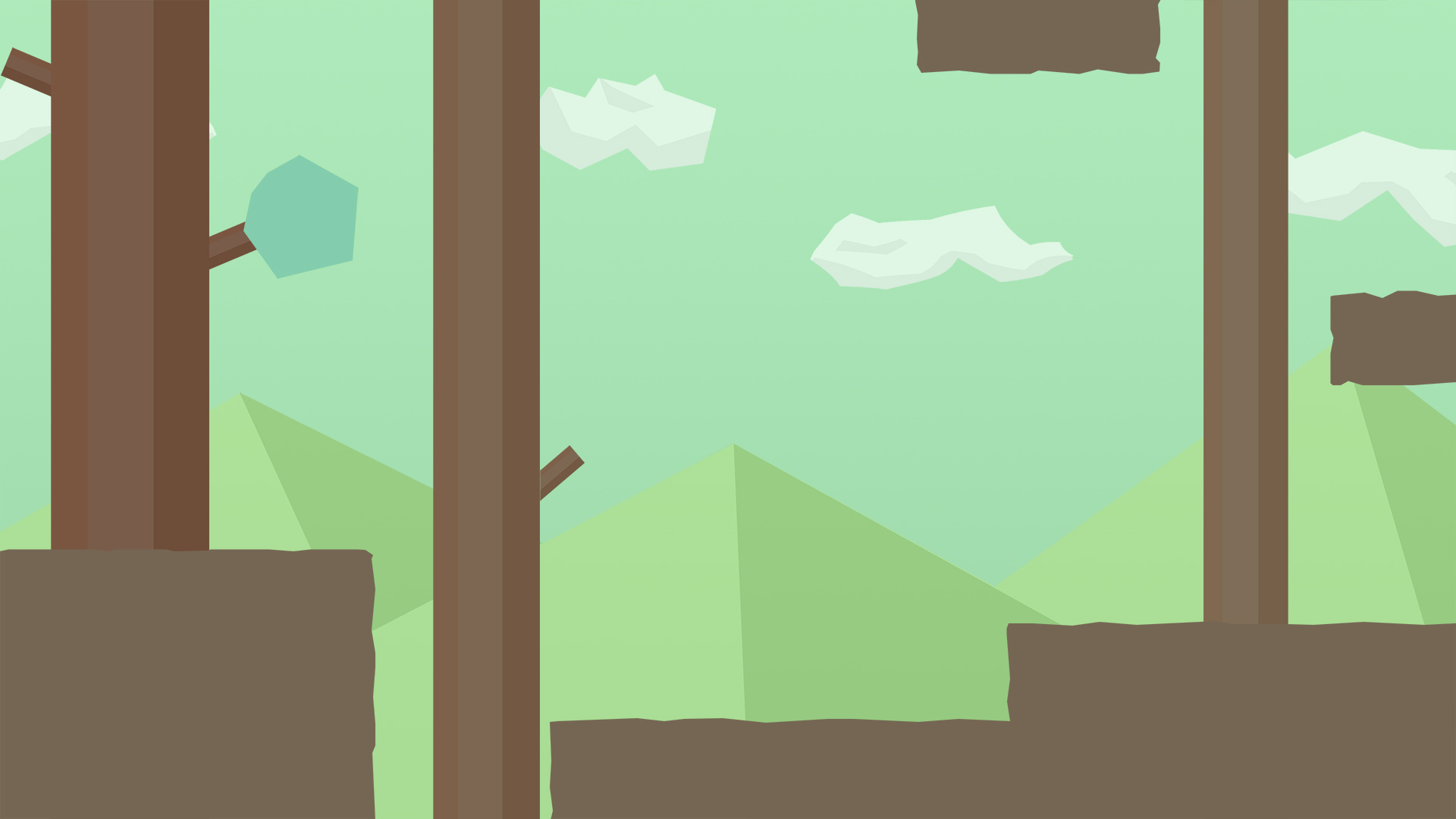 The month following the Baker’s Dozen was spent deciding which project would be our first big title. After much thought and planning of various future project possibilities, we knew that a fully realised version of Melon Quest is something that we just had to make.

Where is Melon Quest now?

The Melon Quest that we are developing today has grown massively since the original Baker’s Dozen concept.

A lot of time was dedicated to planning out a deep storyline that goes far beyond the campaign for Melon Quest. Developing interesting characters, story ideas and lore beyond the game, gives us a greater attachment to our protagonist and the quirky and humorous narrator that guides you throughout your Melon Quest adventures. 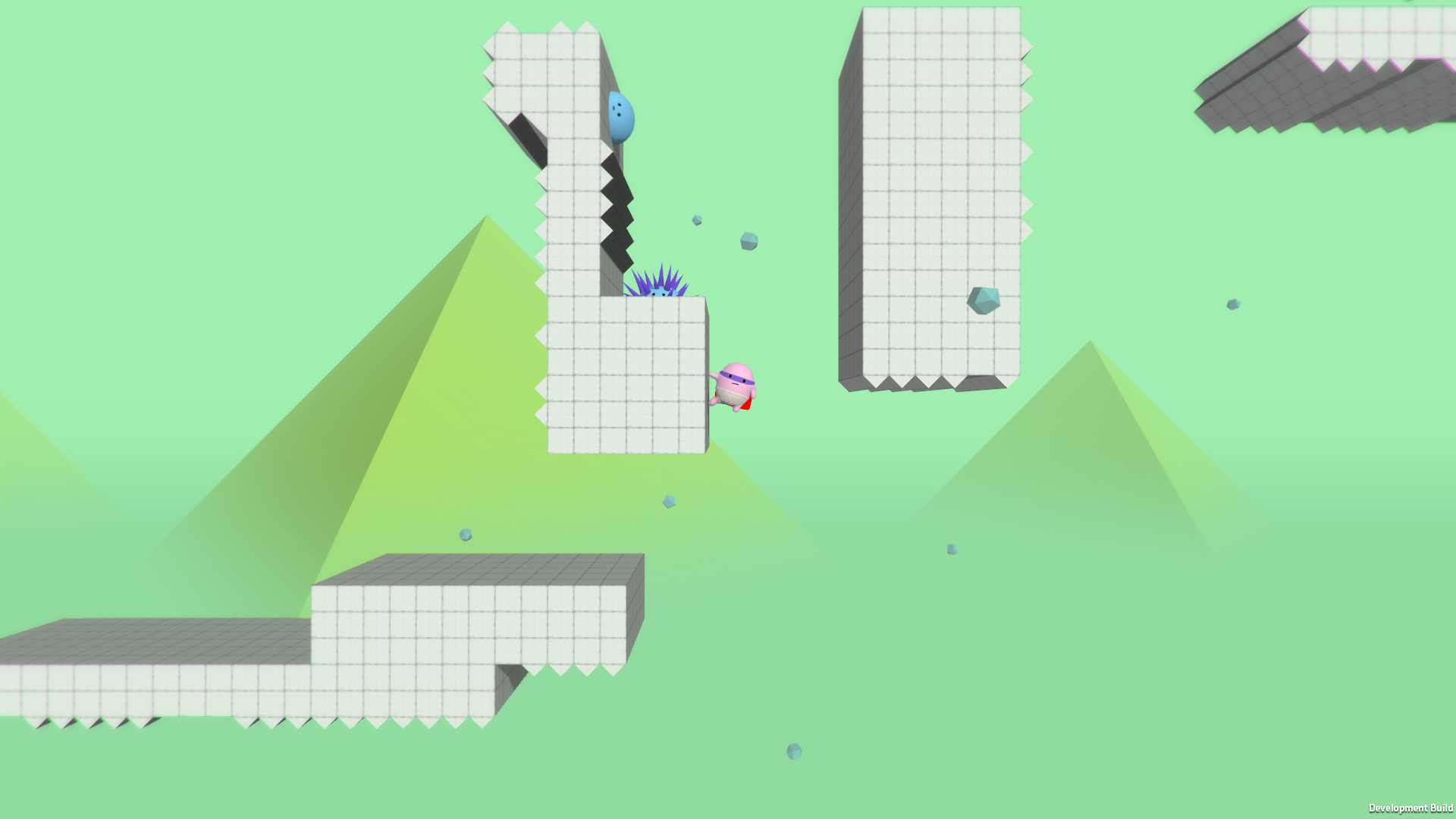 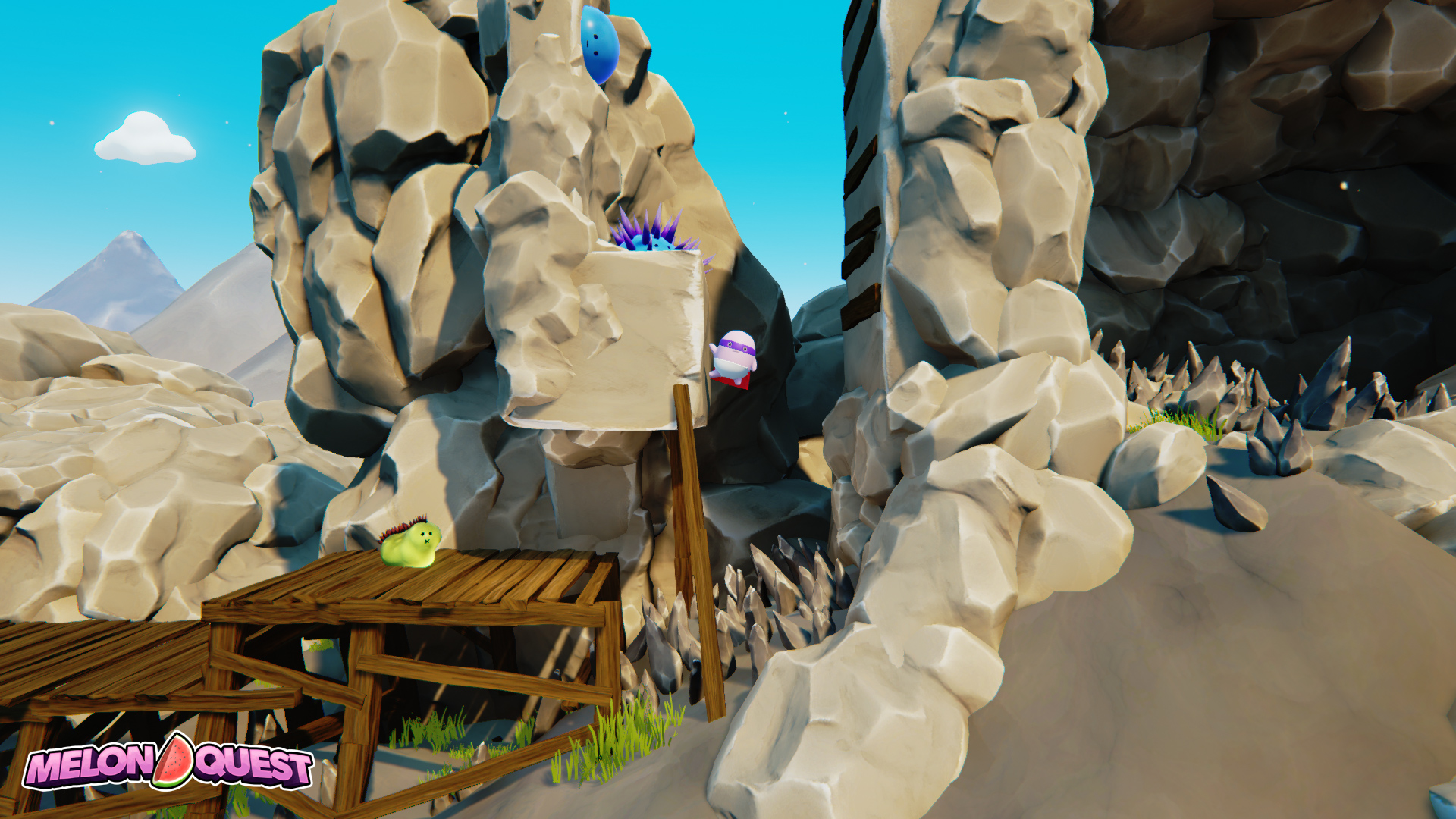 The Melon Quest story, in short, will have you embark upon a quest to retrieve the annual melon harvest stolen from Nelom, the Melon King. The story is set in a vibrant world of another dimension, filled with cute but disturbing creatures and terrifying bosses to slay. As your journey unfolds, you can seek out hidden dimensional secrets and use dimensions to your advantage.

At its core, Melon Quest is still a challenging, hardcore platformer with fast-paced gameplay, but now with a larger focus on combat, puzzles and various RPG elements. 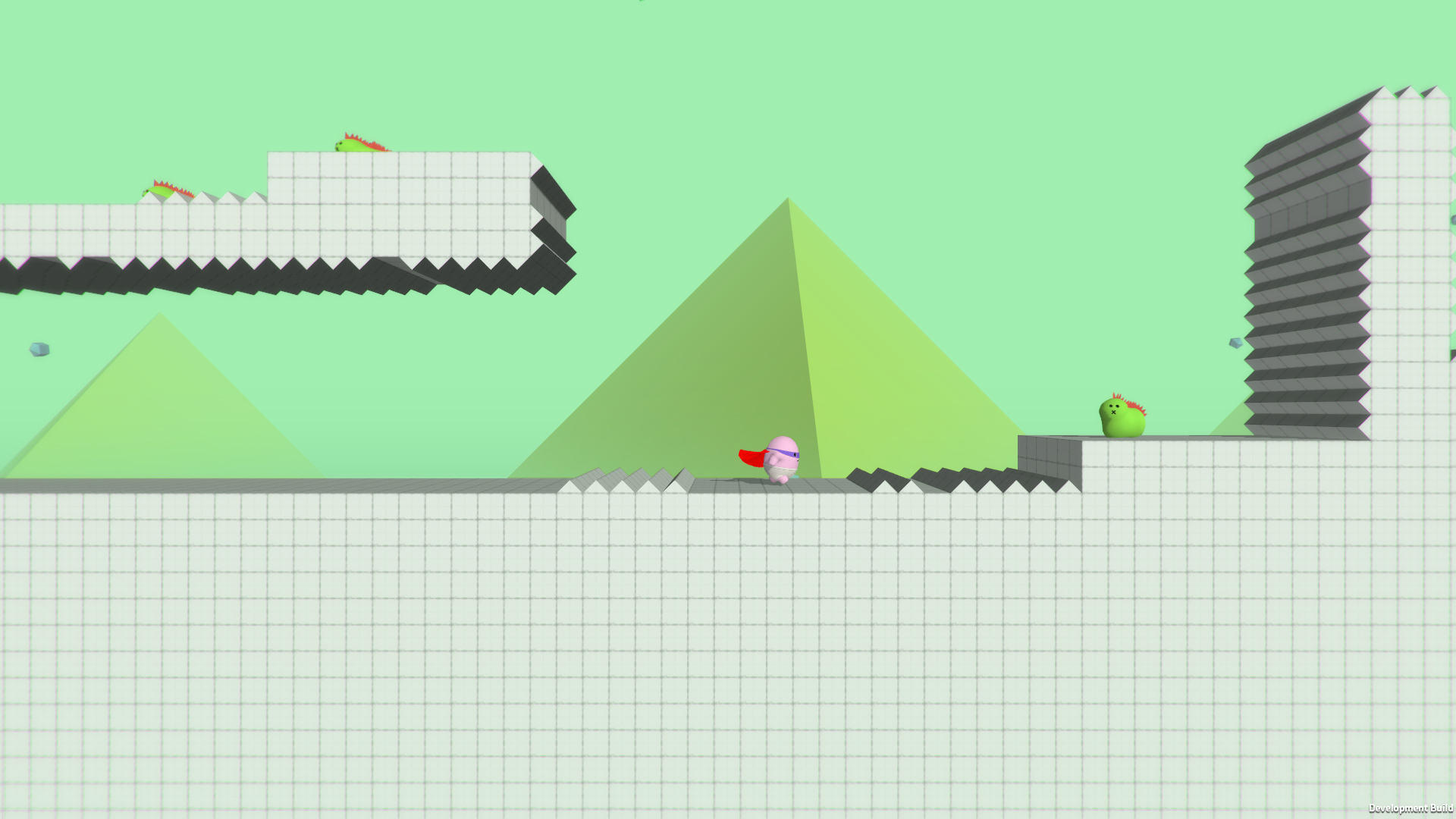 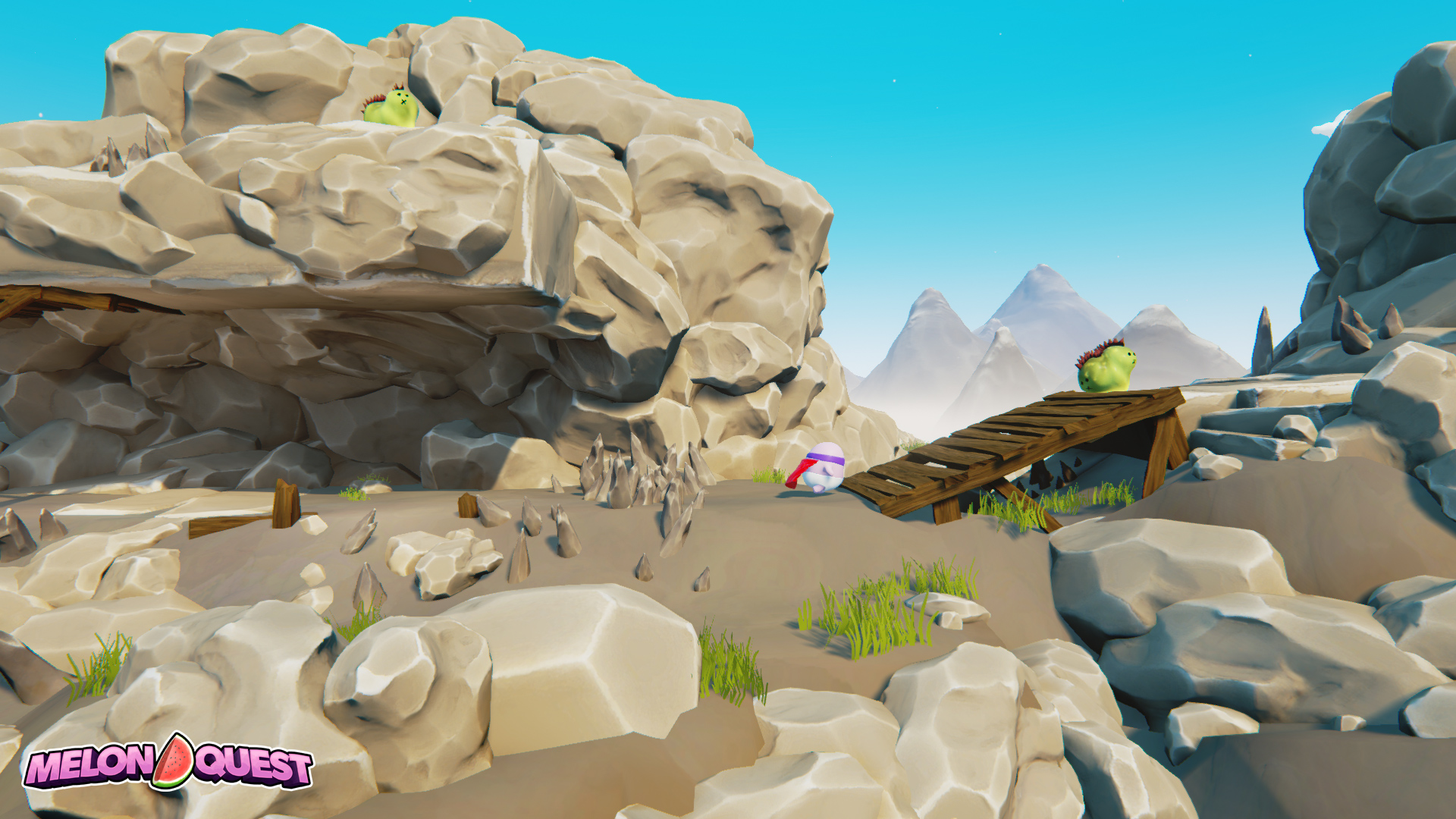 We’ve decided to move away from traditional level after level world design. Melon Quest is set in a vast seamless world that allows continuous gameplay from the first point on the map, right up until the end of the game. Levels have been replaced with different regions and towns that you can freely run between, without the interruption of waiting for a new level to load. These regions will act as waypoints that you can return to for achievements, and to find secrets that you’ve missed.

Throughout your adventure you could stumble upon safe towns full of quirky characters, and merchants to interact with. Some towns might be dangerous, filled with bandits and foes that will put your combat skills to the test. Perhaps you’ll run into a camp with helpless creatures that need saving from terrifying beasts. Maybe saving those creatures will get you into more trouble, and they are in fact the real threat. There are plenty of things out to kill you in Melon Quest. 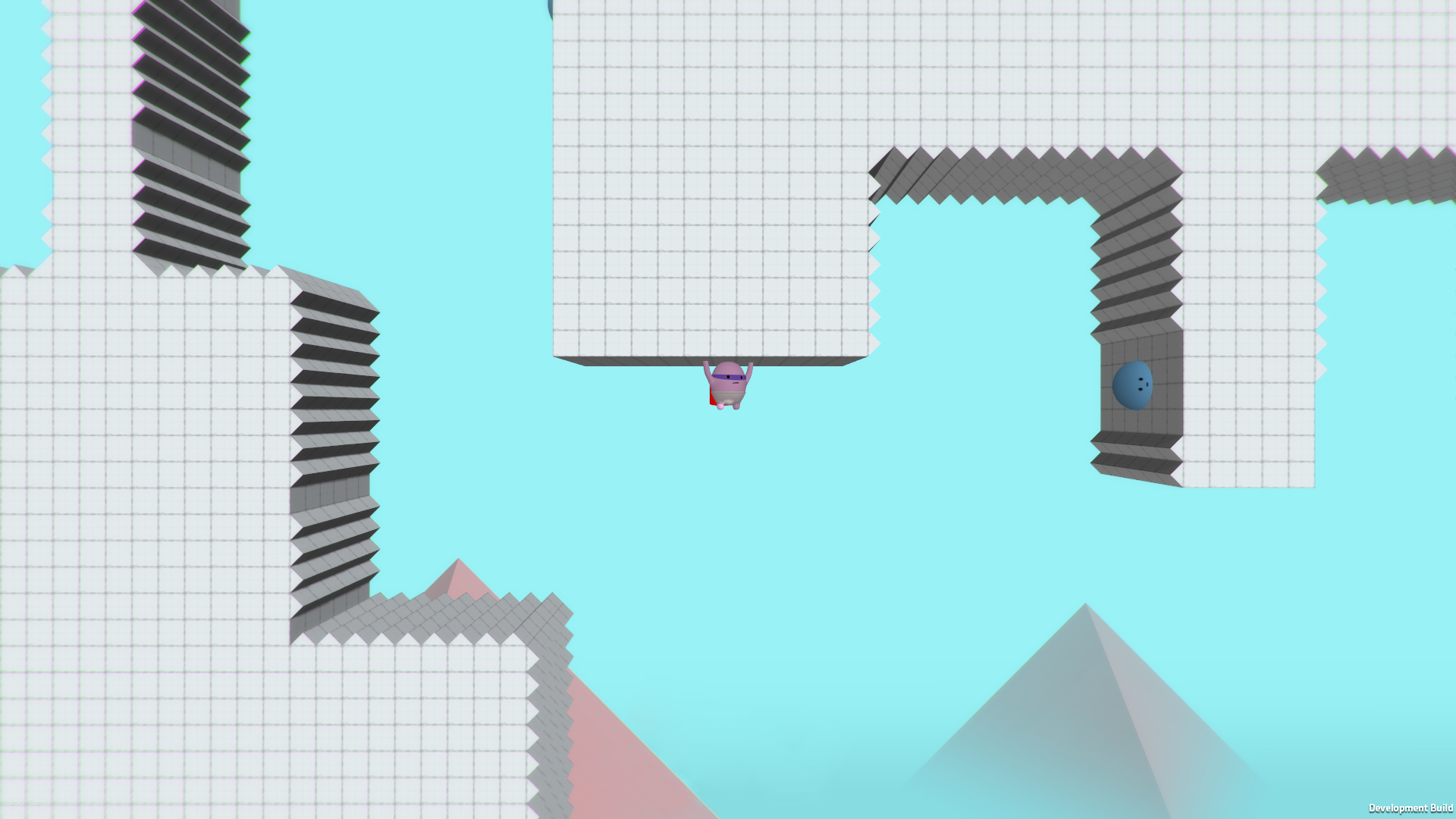 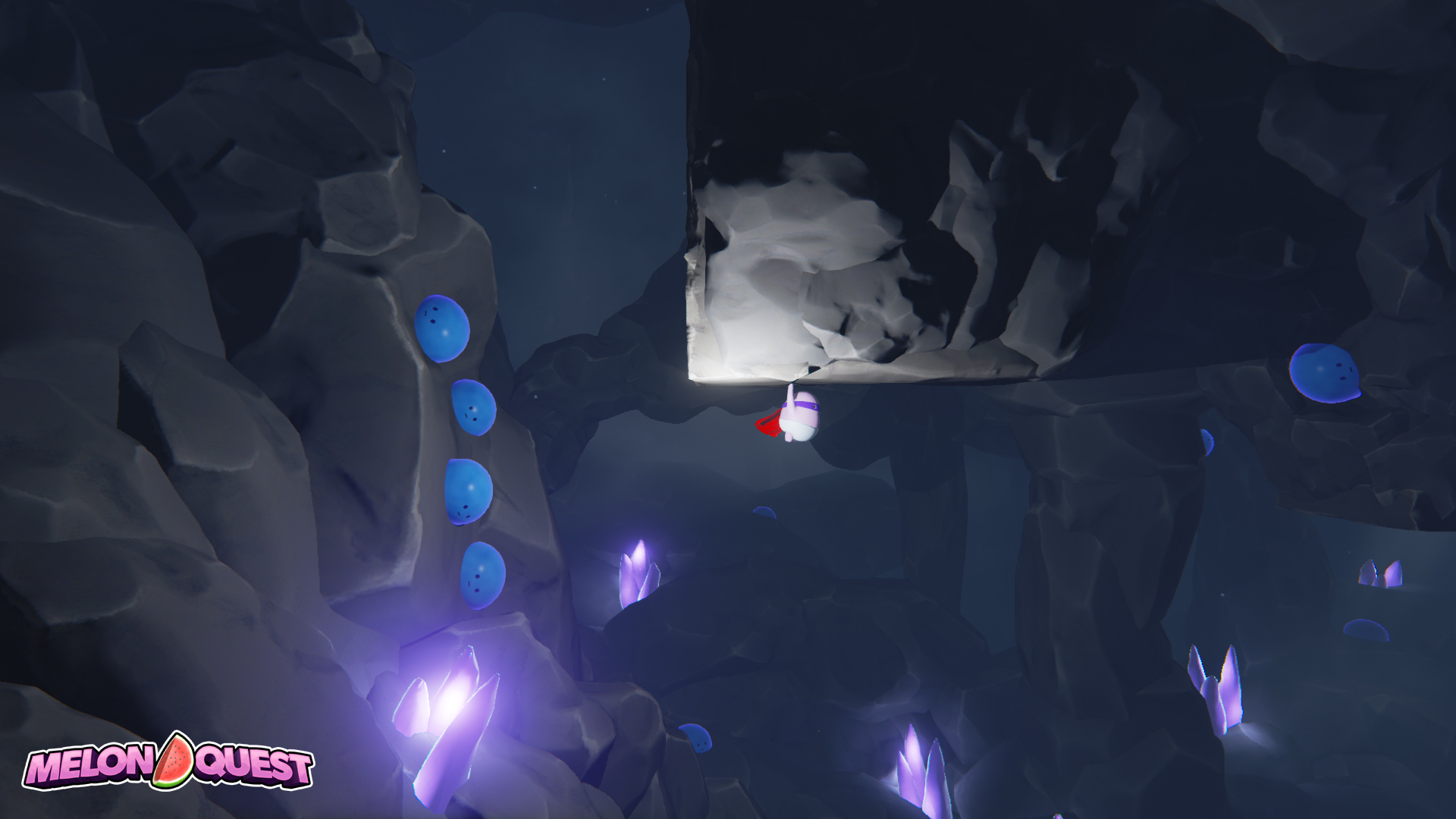 In the world of Melon Quest there are big, breathable RPG exploration moments that allow you to slow down and take in your surroundings. You can find and collect loot in the world, or from slaying enemies, and craft the loot into helpful items when in towns. Crafting items can be used to enhance combat or assist you with solving puzzles.

Both Tim and I are big fans of action RPGs and we really wanted to include some of those features in the game. We think the influence of RPG games will shine through in Melon Quest.

We are re-developing Melon Quest from scratch in Unreal Engine 4. Currently we’re developing a short, less fully featured pre-alpha gameplay demo that will act as a proof of concept for a Kickstarter campaign (to be announced soon). The demo will also be showcased at AVCon 2015.

Moving our projects to Unreal Engine was something that we had thought about regularly since it first launched. We have used UDK in the past and were following the development of Unreal Engine 4 closely. The all-inclusive, feature-rich tool set of Unreal Engine, made transitioning to the engine an easy choice.

The extensive documentation and resources made available, along with the active and supportive community, have helped to quickly answer any questions and overcome obstacles we encountered during development. 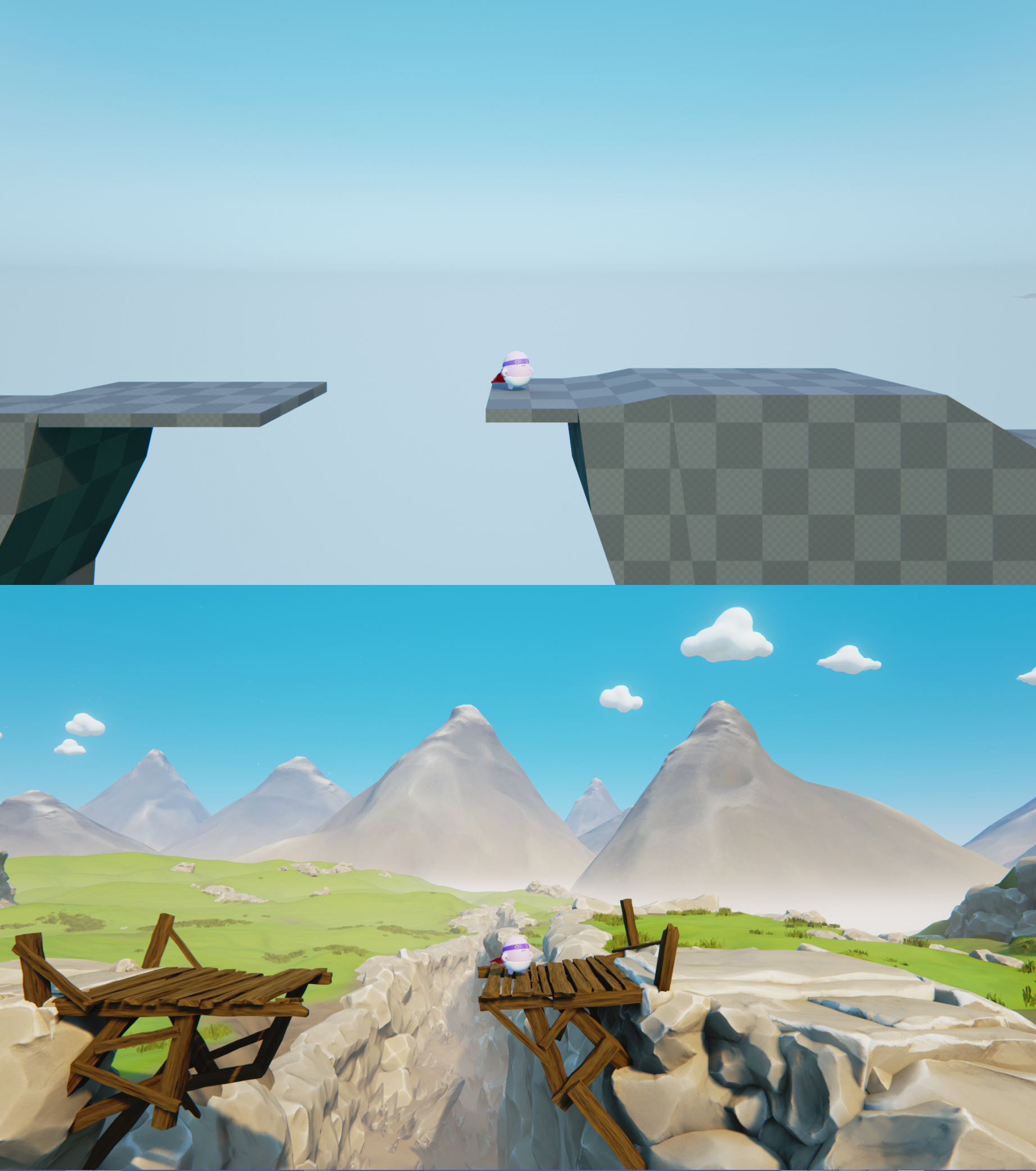 Using the BSP brush system we’ve been able to quickly prototype level designs and refine them throughout testing. We’ve been creating our 3D assets for Melon Quest with Blender 3D and have been able to get a good pipeline from Blender to Unreal Engine to populate our levels. With Unreal Engine we were able to go from a basic BSP level template, to our first playable, asset populated levels that we showed in our first screenshot in just under one week.

Currently the gameplay demo is entirely run by the engine’s blueprints system, which has allowed us to easily add new features and make quick changes.

Game scalability in the engine has also been promising. After just a day of research on optimisation and scalability, we were able to get playable results, and impressive frame rates, on hardware that could barely hold up to older games we threw at it on the lowest settings.

One of the features that we are most excited about in Melon Quest is the massive seamless world. We’ve been able to achieve this using the in-engine level streaming, which was designed to allow large open environments or level loading in the background with ease.

So far it’s been great working in Unreal Engine. The people at EPIC Games are adding new features to the engine at a remarkable rate. It’s reassuring to know we are developing with a rapidly evolving engine, and supportive community.

Ok.. where is Melon Quest actually at now? (for real)

Melon Quest is still currently in early stages of development. We will be launching a Kickstarter for Melon Quest soon.

We showcased the Melon Quest pre-alpha demo in The Indie Games Room at AvCon 2015 to an overwhelmingly positive response!

Gamers of all ages lost themselves in Melon Quest. We even had parents play the demo and make their kids wait until they had completed it from start to finish.

Since AVCon, we've been hard at work refining details of the game and prototyping new features and concepts as we get closer to bringing Melon Quest to Kickstarter.

Melon Quest has been refined into an RPG platformer adventure. We've begun rolling out new info and feature updates and will continue to do so in the coming weeks.

Here's a tasty GIF-filled recap of our feature updates so far: Indiedb.com

Want to be the first to hear about these updates? Our mailing list is probably your best bet!

If you made it this far, thanks for looking into a part of the journey of Melon Quest and keep your peepers peeled for the Melon Quest Kickstarter!

Thanks! We love the building a platformer game with a deep 3D world. What are your favorite 2.5D platformers?