Earlier in May, we released a brief update which included news of an issue with our main office and crafting. This update will launch from those topics: -Risk, Reward, and Community -Crafting Recipe Categories -Crafting Mechanics -Abilities & System Changes 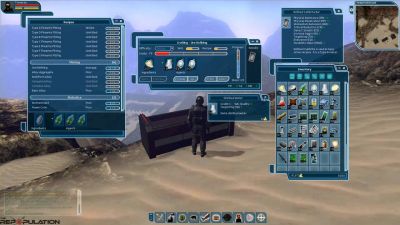 Good day community! We hope your Friday is off to a good start, and that today’s update is a positive addition to your day. Earlier in May, we released a brief update which included news of an issue with our main office and crafting. This update will launch from those topics.

The watery woes of our office endeavor have been resolved, and Sarrene has returned to her office. It will still be a short time before all of the damaged equipment is up and running again.

However, this hasn’t stopped the team from continuing work. As mentioned in the previous update work on the crafting system design has been ongoing. Work on other supporting systems has continued as well.

One of our community members recently gave feedback on a few key topics that we thought we might elaborate on slightly today that cover a combination of systems. Our team would like to thank them and the community for all the feedback they provide. So this months update will focus on The Repopulations crafting and related systems. The crafting image is from 2013. We used that as an example because we want to get back to the original vision of The Repopulation's in depth crafting without the bloated confusion for new players.

These three topics will be briefly covered via different supporting topics below. Our goal with the revamp of systems including crafting is to build a community. Being a sandbox game should give players a multitude of options when planning gameplay. Which means a cookie cutter crafting system will not work for this goal. Players need the ability to be flexible and gain the knowledge and skills that best support their goal. To ensure this we’ve addressed such issues as: 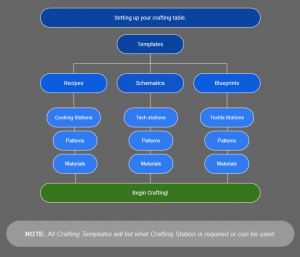 We will be changing the definition of what Blueprints and Recipe mean in-game. With the new crafting system “recipes” will be organized in three categories for easier organization, searching, and sorting. These three categories are terms for recipes that will be saved into your crafting journal.

Patterns will determine the style of the asset being made and will be used as sub-components when crafting items such as armor.

Currently, The Repopulation utilizes a single type of crafting machine. In an attempt to create more versatility and room for the players, we have elected to create additional crafting machine types and tools. This will work in favor of:

Once the new crafting system is implemented ALL of the “recipes” will have to be entered into the game again. This gives us the opportunity to remove, and redesign those that currently exist. When introducing the new recipes tools will have more purpose. Players will have the option of crafting or purchasing low-end Tool Kits from shops. The quality of materials used, and crafters skill will play a role in the overall quality of the kit quality. These kits will then be used in various craftable items and determine a percentage of the end product quality.

To support the new crafting system, we are redesigning the harvesting system from the ground up. The harvestable materials are currently undergoing evaluation. During this evaluation, we have taken into consideration if the current materials fit well with our new design. For those that do not, they will be removed in the future. Materials removed will include items with no use currently. Much like the revamped NPC system harvestable nodes/materials will be placed in the world based on multiple factors.

For The Repopulation it is important that we have a decay system in place. While items will be repairable, they will eventually break/decay. An item will never return to 100% upon repair. Instead these items or “shells” will potentially reach 99% of their previous stats. This becomes very important to the health of the economy and the crafter community.

By having items that break over time we are giving the players and the economy of the game a way to recoup and grow. To further this we are avoiding end products that have no use, or singular uses. However, we will still have some rare materials. These will be handled in a manner to give them more than a singular use while maintaining their uniqueness. 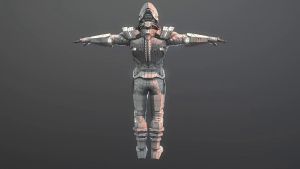 We will have different shell types in-game. Shells do not give additional “power” to the player outside the base materials used. These include:

What will set these shells apart from each other is based on multiple factors.

Personalizations such as Lacquer, Stain, and Paint will all have different effects on the items finish. However, they are not the main components, but agents. Armor dye will no longer be segmented i.e. leg, arm, etc. in the future. Instead, they will be useable on all armor pieces.

► NOTE ON ITEMS: Cash shop items will NOT be available until mid to late Beta. We want the game to be stable before adding any purchasable items.

We will be introducing the following types of inventory to the players in-game with the starting slot counts: (Note these may change or be adjusted once we get them into the game for balance)

With the revamp of systems comes the task of balancing, and ensuring they work well with each other. This means considering how inventory is affected by items, and how those items affect harvesting. How does harvesting affect farming, and hydroponics? How do those, in turn, affect nutrition/buffs and recipes? How do those buffs affect the player and so on and so forth? Which is why you’ve probably noticed so many different topics and systems seem to be mentioned in parallel with each other.

In order to consider changes to crafting, and abilities we have to consider item power, and professions as well. While addressing these topics we took a closer look at our minigames. A few of the many questions we have had to ask ourselves are: "How do they currently benefit the player, and how could they better serve them?".

As mentioned earlier in the update we are redefining certain terms. In this instance, we will be using the term professions in reference to player titles. Players will be able to display profession titles to show they have achieved certain skills and milestones. The use of these titles will not lock players into a specific skill set.

Currently, there are certain minigames that we feel would be better served as professions. We are addressing the abilities and skills that will be associated with the Hacking and Entertainer professions in the future. This will make them more versatile, and allow for a more fluid use in content.

Entertainers: Players will be given back control of the entertainers and allow them to have a wider range of content choices. In its current design players are more at the mercy of button presses than in control of their character. We feel that in a sandbox environment entertainers play a vital role as a central part of the community. They should have the freedom to converse and build routines that work for their patrons. While some players will choose to spend their time in one of Rhyldan’s watering holes others will wish to venture out into the wilds. 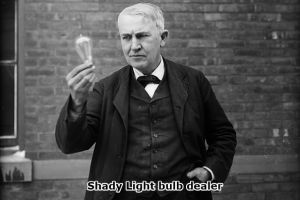 We want to make that possible without forcing entertainers into having armed guards. Though they should still be wary of the foes they take on or the type of areas they enter. We’ll also be working on providing skills and abilities that will allow for solo content as well as group. Players will have the ability to choose if they want to be a battle-prep or a combat-ready Entertainer... or even a combination of the two. It’s about the choice after all without the limitations of a traditional PRG game.

Hacking: Hacking will be undergoing changes that will allow us to use it within the world and missions. Recipes for this skill set will see alterations and will no longer include the light-bulb. While I enjoy the mental image of a shady character discretely offering me an array of light-bulbs from within their trench coat we need change.

In the future, your choice to break into an encrypted PDA may send you down the rabbit hole to new truths about the lore. Who knows you might abandon your previous notions about your primary faction and taking a new path.

While we are not yet in the stage to release featurettes on these topics we will continue to keep the community updated. As always you are welcome to join in on the conversation on our main forum, steam forums, or various social media platforms. You’ll often find us in our discord channel ready to answer questions and chat. We look forward to your feedback and chatting with you soon.