In which a new enemy is begun; and a strange bug surfaces.

This week's screenshot shows some new content--specifically, a new enemy in the works: 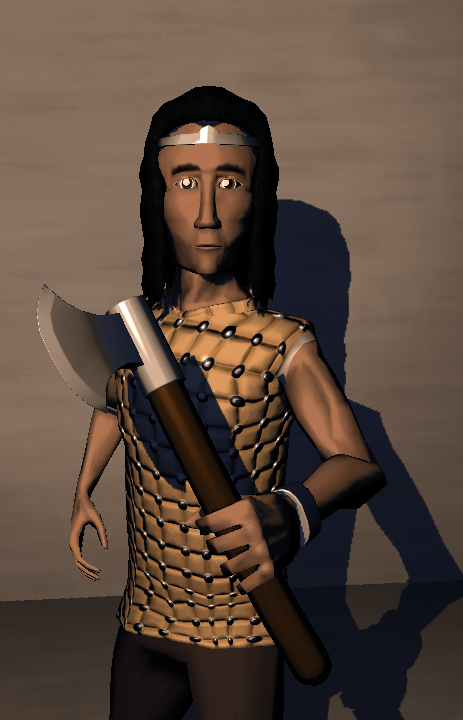 The work of the week just past was primarily given to that enemy--but a fair bit of time was also given to an odd and frustrating bug:

To start with, the enemy above.

In the wake of the demos, a lot of time has gone into changes made in response to feedback given, which has been, I hope, polishing and improving the game. And while this has been useful, it had also resulted in my feeling that the game had somewhat stalled, that it might be more polished, but that without work on new content, it wasn't moving forward.

Make no mistake, I am not unhappy that I've been given the feedback that I have, nor do I wish to dissuade any further! Far from it: I'm deeply grateful for that feedback, and hope that people continue to give it.

Still, I'm glad to say that while there are a number of feedback matters yet to attend to, in the week just past I finally felt that I was in a position to return somewhat to work on the game's content.

This character isn't intended for the next level in sequence--I intend to skip that level and return to it later, focussing next on the rather shorter levels that come directly after. In this way I hope to gain a "quick win", and the sense of progress and accomplishment that comes with it, before going back to another planned-to-be long-ish level.

As to the enemy's status, they're still very much a work-in-progress. I have first drafts at the least of most of their animations, I think, but there's still a fair bit to be done. Not to mention the work of actually implementing them, both as a combatant and within their level.

On the technical side, in the week just past a rather strange and frustrating bug was discovered.

A player reported to me that, when they attempted to pick up an item, the game quite consistently crashed. Based on the game's log, it seemed to be that the game was attempting to act on an item that had already been destroyed, leaving it with invalid data.

My best guess right now is that, somehow, the game is receiving multiple mouse-up events in a single update. That might result in the first mouse-event causing the item to be taken, and thus its in-level version to be destroyed. Without an update occurring between the first mouse-event and the second, the latter event might cause the game to then attempt to act on the same in-level item--which has been destroyed, and thus is no longer valid.

But why might that be happening? It didn't seem to happen on my machine, and this was the first report of such a thing that I'd heard.

What's stranger, testing seems to indicate that such things as swapping out the mouse or even changing the mouse's USB port could affect whether or not the bug showed itself!

For now, investigation continues! (With the great help thus far of the player who reported it!)