The first in a series of posts that will look into the creation, development and release of the horror game LYA. The first part looks into the very beginnings, what changed and some of the influences that influenced the development of this game. 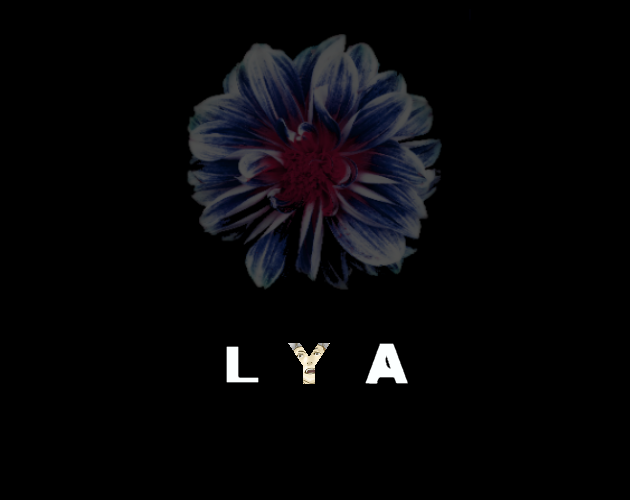 This is the first in a series of posts that I'm going to release, that will detail the development of LYA, from the earliest stages right up until release (sometime in June 2019). I'll be releasing these posts at random throughout the upcoming month so be sure to follow, subscribe etc. if you want to keep up to date.

Now then, let's get into it.

(There may be slight spoilers to anyone who hasn't played the demo though they aren't anything too major.)

Originally, I'd wanted to make this game a horror game, mixed with some elements of comedy and surreal humour. While the character Lya for example, as well as tthe school setting along with the attack by the masked people were all there since this game's inception, the whole dynamic of the story and gameplay was originally going to be quite different.

Originally, the game would have Lya actually die within the first few minutes, only to be taken to a place called the Eternal Classroom. This place would serve as the main base in a manner of speaking and it would have been here that you'd meet up with a strange character, a skeleton who calls himself a professor. 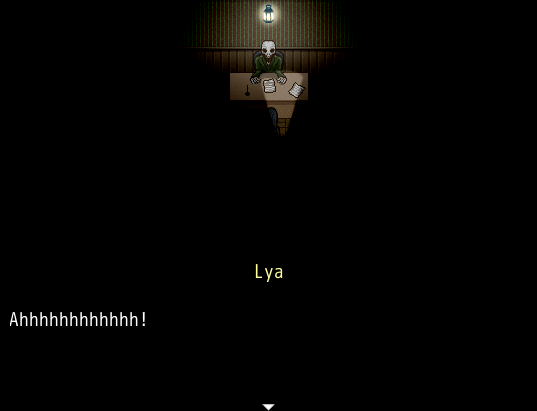 He'd explain that he has ways of controlling time and that he can revive you back to the moment the game started, so that you can find ways to survive the initial attack and help as many people as possible. He would claim, seeing as this game was originally going to be way shorter, that you had to make it through 1 hour (in game time) so that he could ensure Lya would remain permanently alive.

So the original game was going to be less focused on story and characters and more on gameplay. Plus there'd be more an emphasis on repetition, trial and error, as you try to find out who to talk to, what to say, what items to keep and which classrooms and corridors you had to go into in the right order.

The game would have had the character Lya die in multiple ways, some downright gruesome, some 'comedic' with many different endings and story developments depending on your choices, such as who lives and whether the ending you get is a decent one. (Some were going to be comedic with the skeleton professor suddenly sporting a moustache and sombrero).

But then, the game changed... 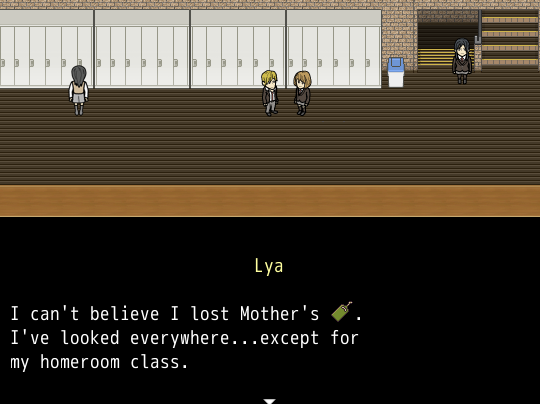 As I started to develop the plot a little more, but especially developed the character of Lya, the game started to change. Certain elements (such as the cellphone which is mentioned below) got discarded, the skeleton professor and Eternal Classroom were soon discarded as the focus became on making a full, fledged out horror game. (Plus, the going back in time was scrapped too).

Also, having (imo) such a unique tileset and character sprites collection at my disposal, I felt that I had to do more than just a small one hour game. So I abandoned the early incarnation of what turned out to be LYA and started working on the second, and current version... 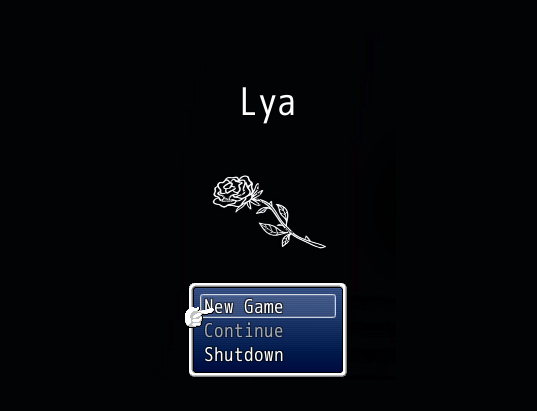 The flower motif was always present, from the very beginning, though the initial reason was quite different.

Basically, the flowers in game would have represented your health. So say you died in a map or messed up a certain puzzle, you could use a flower (1 of 3) and be transported to the previous map you were in, essentially resetting your progress. Once you were out of flowers, you'd be transported back to the Eternal Classroom, where you'd have to restart the entire 'level' again (Although I planned on being able to find more flowers during gameplay).

Despite that idea getting scrapped, this flower motif remained, firstly becoming a white flower on a black background (to show the emptiness of colour in Lya' life during the game's events). 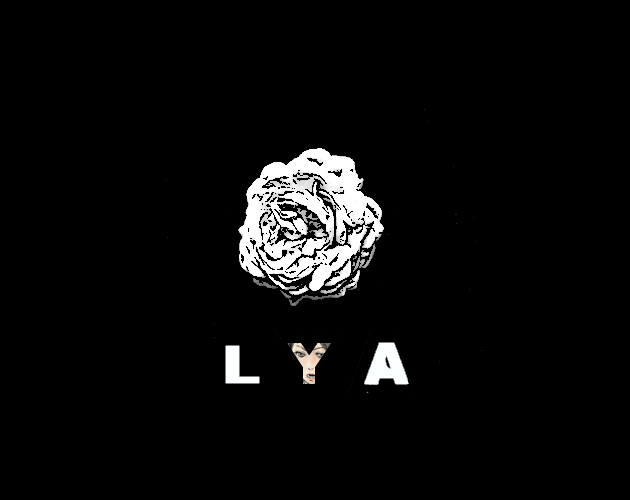 Eventually, it became a blue flower. The blue flower, in Western history and culture 'stands for desire, love, and the metaphysical striving for the infinite and unreachable. It symbolizes hope and the beauty of things.'

Seeing as this tied into the plot and character of LYA, this for me made perfect sense to use as a logo for both the game and the character. 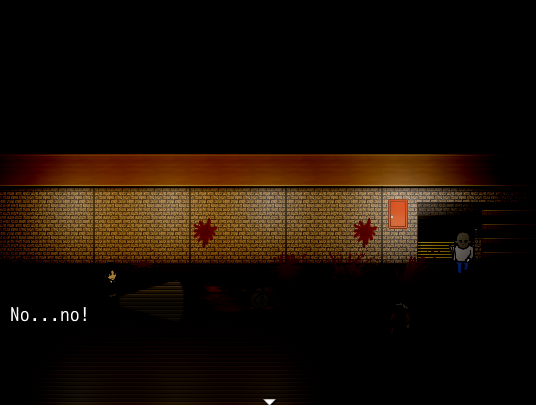 While the character Lya, the half Japanese, half European girl always existed, the original name of the game before the shift in direction was CELL. This was because your menu screen, in my original vision, was going to play a major role, taking on the form of a cellphone. You'd have been able to record and access pieces of information, data, numbers and decipher the best path forward in your quest to survive for 1 hour.

Plus, your torch was originally going to be just your cellphone (this has changed in the final version, as evidenced in the demo when you use a flashlight) and you were going to be able to phone certain people in the school. This however changed once the focus of the plot and characters was changed.

Originally, LYA was going to be solely set in either Europe or Japan, with LYA still half Japanese, half European. This changed after as the tileset and character designs came from a Japanese creator so I wanted to pay homage (plus challenge myself slightly). 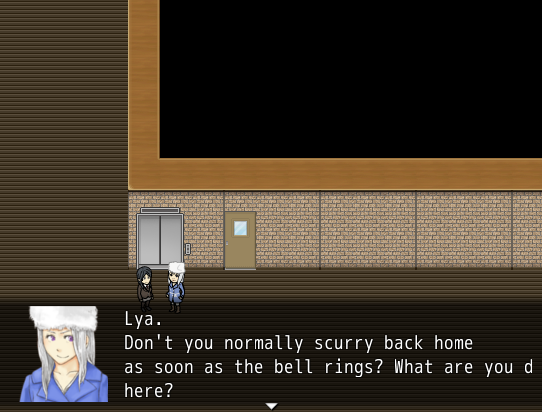 Mai was always present as the bully, she is one of the characters who appears in the original version of Cell, though her original name were both Mandy and Mae (her name starts with M seeing as the letter follows L, the first letter of Lya's name.)

The three bullies below were also present (in the final version of the game you may just see them again.) 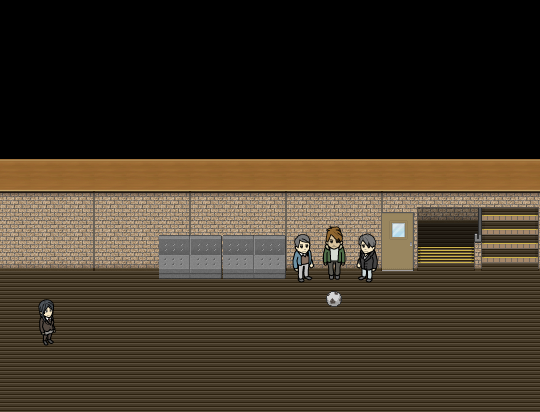 Hotaru was a later addition to the game. She didn't appear until way later in both the development and writing of the game, though now I can't imagine not having that character present.

Next time, I'll focus more on the influences and development of the current version of LYA, from the map designs, gameplay choices, musical choices and much more.

Before I end this first part though, I just wanted to make clear what kind of horror game I am making (plus what follows is pretty much what I enjoy most from horror games.)

I have always preferred, in all forms of entertainment to do with horror, the kind of horror that creates tension and dread, that tells more than shows and that conjures up images instead of showing you the body or gruesome parts. (For instance, in the demo, when the attack begins and your flash-light shines on the bodies, there's just enough detail to get an idea of what you're seeing but it isn't thrown into your face.)

So while I won't deny there are the odd one or two jump scares sprinkled about this game, I'd say the horror comes from another place. That is why longer gaming sessions, I think, with horror games like the one LYA is, are better for your gaming experience. So I'd say, make sure you got plenty of time put aside to play long stretches of the game to have the best experience you can once the final version is out.

Anyway, I'll post the 2nd part soon, hope you all enjoy the demo. Follow, download, spread the word, whatever you want to do to support, it is much appreciated!