Post news RSS Logos are not made in a day

Description of a game logo design process by one of our artists, Jukka Kivijärvi.

Hello dear readers, it's Jukka here to serve you another post, this time on the subject of Interplanetary's logo and what went into the process of designing it.

Why do we need a logo?
The idea behind a logo is to provide people with something to recognize the product by. Having just a name for a product isn't quite enough, as there can be other things going with the same name (as long as it's not a similar product/entity etc).

A logo provides the name a unique and recognizable aesthetic. It's a building block of a brand. Brand is something that is born instantly, it's the sum of people’s thoughts and opinions of the matter at hand and those things can take time to form. A logo can give people something to base their thoughts and opinions on, when they first encounter a new brand and also a way to recognize it when they see it again somewhere.

Personally though, I feel that game logos don't need to be as thought out as traditional corporate logos and other product logos, as games have better ways of introducing themselves to new audiences, for instance trailers.

Design process
To start off, you need a name and, lucky us, we already had one. Both I and Tarita, our artist, started by sketching our own ideas.The name “Interplanetary” was originally just a working title, but as it hadn't been used for a game yet and it did a good job in describing the game, we stuck with it (there's a scifi movie by the same name that came out in 2008).I like to start logo designs by sketching straight in Illustrator. I combine shapes and use the pathfinder tools to cut out and merge them, looking for interesting results. 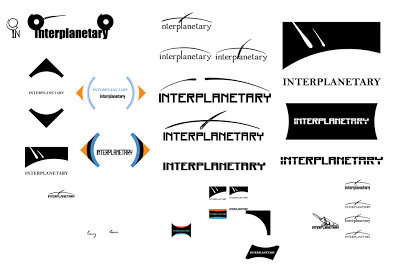 Some of the first sketches and their variants.

The world of scifi-themed logos is filled with planet shapes and crescent moons, blocky typography and carbon fiber textures. While I tried to come up with something a bit more original I also wanted to include the idea about shooting at planets... Which at first resulted in designs that mostly remind you of things you learn about animal reproduction in biology class. So in the end I made some compromises and didn't come up with the most original of designs, but rather ones I felt conveyed the idea best.

After a while we gathered up the sketches and chose four we liked most and put together a simple survey to ask for opinions and feedback from our friends in facebook. The survey provided us with good feedback and strengthened our own opinion on which design to choose.

The four candidates we chose for the survey.

After posting the survey I moved on to make a short teaser to show at the upcoming Nordic Game Conference, which ended up taking all my time. As a short time remedy we used a plain white version of the logo that was most favored. This way we had a logo, which would be pretty close to it's final form and most probably wouldn't change so much that it would be unrecognizable.
After the NGC, I postponed working on the logo for some time, while I concentrated on honing the teaser and its idea bit further. The teaser is still a work in progress, but I did finally take the time to put the finishing touches on the logo.

Final version of the logo.

And that sums it up. Hope to see again next time.

Pretty schmick. Doesn't have the same impact as a couple of earlier revisions.

Thanks. It really did come out a lot more toned down than the previous versions, but I think it'll suit the mood of the game, since you'll be needing a little a bit of planning and finesse before everything on the other planet goes boom. ;)

-Jukka (who for some reason can't login using twitter...)