A little update with some Skas'ka I concept art. Showing the promenade deck, the stations security station and a rather dodgy space pub.

We have almost all of the locations for Rick Future planned out now. There are still some small changes here and there, but it is shaping up quite nicely. You can look forward to solving puzzles not only onboard the Eric, but on space stations, alien planets and other exotic locations!Before we start building the actual 3D environments we create concept arts for each location. These concepts help to us visualize the locations and allow us to make changes before somebody spends time building 3D assets. Such concepts also give our 3D artists something to work off when they start building the 3D objects.

We would like to share a few of our work in progress concepts with you today, so you guys can see in which direction the game is developing visually. Check out the concept art for one of the main locations of the game: the Skas’ka I space station, located in the dangerous Gon’Dual sector.

Skas’ka I
This old mining station, once built by the Izlaak race to exploit the minerals of the nearby asteroids has clearly seen better times. Only a small crew of miners remains on the station these days. Most of the stations shops have closed down and the majority of the inhabitants has moved away.

The Eric, broken and in need of repair, has docked on Skas’ka I after barely escaping some very resilient bounty hunters.

The concept arts below show some of the key locations on the station. You can see the promenade deck which acts as a central hub for the player to access different places in on the station. From here you can visit the station's run down security office, a rather dodgy space pub or visit an alien game arcade to play a round of ‘Whack-A-Human’. 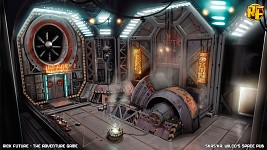 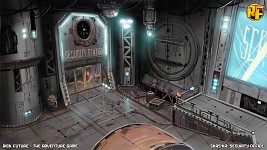 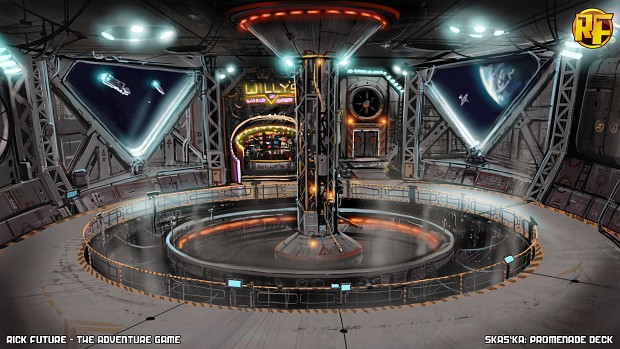