Greetings fair Mondoider. Last week you learned the wonders SHAZAM! but there was a voice that was curiously absent. A French voice. The voice of our very own Romain ‘RobertJohnson’ Dron. So this week we thought we’d have a chat with him, as we’re nice like that.

Greetings fair Mondoider. Last week you learned the wonders SHAZAM! but there was a voice that was curiously absent. A French voice. The voice of our very own Romain ‘RobertJohnson’ Dron. So this week we thought we’d have a chat with him, as we’re nice like that.

Hello Romain! So, word on the street is that you’re the man to talk to about the next update. OMG WHERE IS IT ETC?

Yup, looks like it's up to me this time… although Chris is the one who creates the release builds. Yup, I still don’t have absolute power. As to when it’ll release, well I should hope it’ll be soon™. What’s more it should be releasing alongside my new version of Last Stand! Hoorah!

On top of the Last Stand stuff (that you’ve mentioned now, completely ruining the tension) what tweaks and fixes will the next build herald? What will be of relief to seasoned PZ players?

Well, the big stuff is on the upcoming post – but on top of what’s listed there I’ve now added fixes for inventory browsing. I’ve re-added the shift key to let you select multiple items for instance, and now clicking in your inventory will stop you from shooting in-game and stirring up the aggression of the local zeds.

A big task I’ve had, meanwhile, was the complete rewrite of the save/load system for camping and farming. It needed a ground-up approach to finally be rid of the teleporting crops bugs and I HOPE it’s now fixed – the map streaming made it a real toughie to gets to grips with. It was really hard to reproduce, understand and grapple with. As of right now I’m more balancing and polishing, and it feels really good. Can’t wait till it’s out!

So what else are you doing alongside all this balancey, polishy business?

Well, I'm in touch with a great bunch of modders – and I’m helping them make stuff by adding extra code to the game, or simply explaining how stuff works. It’s great to see the mods starting to pop up everywhere – and I really want to underline the fact that I’m always available to chat to people who’re interested in starting out in PZ modding. So don't be shy, and feel free to ask anything on PM or on the forum. I talk to loads of modders over Skype, and can always do with more!

I’m also starting to learn more and more about the meta-game – how it works, what we’re going to do with it and how the tools are going to work. Oh, and I’m browsing the forum to kill the bugs people report. And making tea and coffee for everyone else on the team, obviously.

So what will you be up to after this update appears? What’s next on the hitlist?

I’m going on a long holiday. Oh, hang on… no I’m not doing that. My next job will be to make the game fully playable with a controller – which will cover a ton of bug fixes, as well as making sure that stuff like character creation, skills panels and various other menus can all be used with a pad. There’s also a lot of stuff that makes the current experimental split-screen mode a bit annoying – say, the moodles that are only seen on one player. It’s all stuff that’ll help on the long road to full multiplayer.

What are your favourite mods that you’ve seen appear on the forums recently?

Erm, I'll be a little pro-French here (we say "Chauvin" in French!), but the alpha version of Peanuts’ hunting mod is really great. It’s the mod I always wanted to create, after fishing, and we’ve done a lot of work together to get it created. It’s not finished yet, but it already looks awesome.
There are lots of others though: RobotMat is doing a wonderful work with his Taunt mod and sleeping overhaul, Kinyoshi’s pickling mod is fab - and don't forget the Vacation Island by Thuztor! A whole new HUGE map with a lot of new tiles.

You’ve waited long enough. Please regale us all with your plans for Last Stand, immediately.

While Chris works on the NPCs and the metagame, my personal project is currently in creating a new Last Stand challenge, with various upgrades on the original. The first variation on this should be coming out with the next update so we can get some community testing underway.

I love the sorts of games when you slowly earn money or experience - so every time you can make it a little further – so in my take on the mode you earn money for every zombie killed, and at the end of every wave the faster you’ve wiped out the zeds, the more money you'll have, to buy weapon, ammunitions, bandages and crafting materials like planks and nails. You’ll also have a Global XP system linked to the character you create though – so there’ll be cash boosts, XP boosts, starting weapons and the like that are permanent too. It’ll take a while to unlock though! 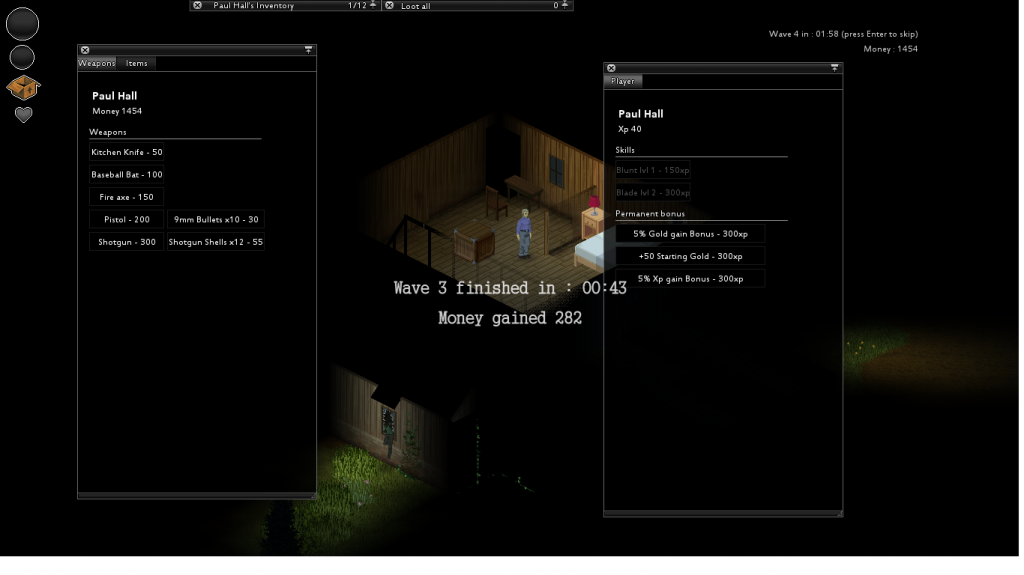 One of the reasons we’re pushing Last Stand a bit is because we think there could be loads of cool, easily constructed mods that will come out of it. Could you explain a little about how modders will be able to make their own variants?

It depends what they want to do, but it's a good start to copy/paste all my Challenge2 lua files, rename them, and start working! It's pretty easy for sure, I'm planning to include something of a blank map where you'll have something like 20min to build up your defences until the first wave - and a load of planks/nails. Then again, I’m fairly sure that an enterprising modder will end up making it first!Everything is Lua driven, and I’m trying to leave advice within the code as much as possible, but modders should bear in mind that it all comes from the rambling mind of an insane French code monkey. So don't hesitate to PM me if you have any trouble! I don't bite, and if I do then I swear I’m not infected!

And finally! A word from the dev team in general. We just wanted to say that we’re aware that we've not quite stuck to our weekly / quick update pledges since the latest bunch of updates came around. It’s become apparent to us that releasing a quick succession of updates bodes just as ill in terms of stability as releasing too few. Instead we’re trying to find a middle ground, where we get a good few new features in and have plenty of time for testing. We’re drawing to the end of things to do for this update, and a new closed testing version will be around in the next few days. We'll keep you in the loop on how it all goes.

On the NPC front, work continues - as does the growing excitement. As well as the NPC looting that's now mostly ported over to the new flowchart engine, we now have leaders bossing around the other members, telling them to patrol the house, or guard windows, which they all promptly do (though one day, they may not!). Good times! See you next Mondoid!

So last stand mode is like a tradtional shoot to survive gametype? With the money do you need to find stores, or spend it where ever you are?

It would be cool, if you could go to say, a grocery store to buy food to survive in the waves with, and a gunstore to purchase guns and the like, but I'm not too sure that'd be easy to do without the metagame OR NPC's implemented.

I read it as Roman and thought you were adding legionary armor and gladius's to survival mode.

On that note, add museums. I want to be the last Roman standing.

ah good word play my man, yes indeed they shall.

I can smell the sweat of the pixelated npcs nearing by....

It's realy good based on what I'm reading. It still needs NPC's