If you thought Corinth was the only big bad in the Crystal Mines, think again, meet the Cryvern!

Greetings friend! We've got another packed devlog this week, so grab a drink and enjoy today's read! Last week, we showed off the new dungeon area, "The Crystal Mines", along with many of the enemies you'll encounter there. While there was good progress involved, there was a lot of WIP enemies that made it to completion this week, as well as some new additions.

A new feature we've added is the abyss. In certain areas, you can fall off platforms, so watch your step! We've yet to add consequences, but the current one set in stone is losing a percentage of health upon fall.

The bear things, now called "Crhyno", walk about just like the Rolies. They're able to strike with regular attacks, as well as use their hard crystallized heads to ram into enemies knocking them up.

Here are the bats, or Zots, from last week! They're the first flying enemy added that can keep their distance, and strike at you when ready. However, if you guard against their attack, you can knock them back!

This is a new addition, but still WIP.

And if you thought Corinth was the only big bad in the Crystal Mines, think again, meet the Cryvern!

The attack needs a lot of polish, and he also needs a beam, but that'll be added in tomorrow. In case you're wondering, Corinth is big enough to eat a Cryvern.

We also have a new addition to the team, who's name I still have no idea! He's going to be helping out in the art department. J has been directing him to the direction of attire, and this is what's in store. 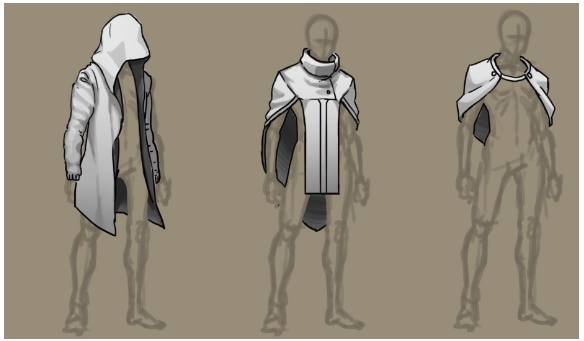 Land of Fire has been in development for over one year, every single day except Christmas, and as you guys might've already seen on our twitter, we have started planning crowd funding approaches for Land of Fire. We've announced the Kickstarter date for September 5th, but this will be changed to October 5th, one month after the initial date. There is a good reason for this, as we've decided to apply for the Square Enix Collective on August 20th. This gives games who plan on doing crowd funding an extra push if the popularity demands it. It's basically a yes/no vote type ordeal to see if the community would be willing to support a game in crowd funding. So go ahead and check out the website, we'll be looking forward to your vote! I think this will be a great opportunity for the team, as this will give us a better perspective on how crowdfunding LoF might actually go when the time comes.

Preparation for both the collective and the Kickstarter begins next week, so unfortunately, next week will be the last content update for a while. We'll continue polishing and putting things together for a possible demo, but until then don't expect too many in game updates for a short while. A lot of people have actually been asking when we plan on putting the game up for testing, and I believe this is the best time to start preparing for such a test, this will be said "demo". Land of Fire needs to stand out among other games, and besides being a 2D game with a very unique style of combat, we believe being a 2D MMO is what will really make it stand out. For those of you outside of the BYOND community, seeing a 2D MMO of this scale isn't very common, seeing one of this caliber, is almost unheard of, and it's definitely something I'm excited to see to the very end.

Wow! I love the additions of this new Devlog.
Waiting for voting your project in the SE Collective!

Thank you, it really means a lot! We're all looking forward to the campaign!