Jumping spider, a novel platformer for desktop and mobile, is trying its hand (or I should say, at least four of its legs) at crowdfunding.


After many months of working late and looking at creepy spider photographs on Wikipedia, I finally feel like I'm ready to plant Jumping Spider on Kickstarter and see if it grows. 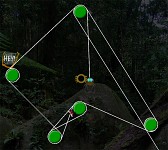 The newly revamped demo level, has been made easier and less bug-prone, and all in all serves as a proof of concept for the game's core mechanics.

The goal is to raise $20,000, to be used to get me what I need to work on the game from home instead of after hours at the office and to pay down some medical bills so I can make developing the game my second job (or perhaps, if things go insanely well, even my first job), instead of something else.

If all goes well, the game will be released in June 2014. So check it out, won't you? If you like the concept please pledge, or at least help spread the word about the project!