Lots has been added to the game since our last update. Enemies can now invade your ship. You can land/interact with planets. There are new enemies, and even a boss! Also, you can now trade!

Interstellaria has taken huge strides in the past month. It's evolved into such a more complex game. Alas, still more to go! Lets dive in.

Firstly, we've expanded on the ability to interact with planets:

When you arrive at a planet, a button pops up with allows you to get more details about that system. Currently, it automatically arrives at a planet. Later you'll need to scan down important worlds

As you can see, you can also sell things. The code is actually in to buy things as well, HOWEVER the dynamic trade system isn't in so there is no gear seeded into it.

We then moved on to work on enemies invading your ship. It really changed the game quite a bit. No longer do you just plink away at the enemy and repair hull leaks every now and then. Suddenly combat can get very deadly very fast

We've also added a new prompt when you encounter an enemy. it gives the option to talk, or flee from the situation. The Talk button is disabled right now, but the flee button works. Fleeing is based upon the ships stats and the enemies stats - failure to flee causes a penalty to the ship!

Finally, landing on planets! We had a big challenge with how we wanted to present the transition from space to planet. There are no teleporters in Interstellaria. We decided the best course was a drop pod. We wanted something that looked industrial/no frills

Here's a look at the pod a little zoomed in:

New items have also been added. A good example is this space suit. Right now there are no bonuses for equipping the whole set - but one thing we've added to our dev notes is the notion of equipment "sets"

Also in planet phase is new enemies! For one of the early levels you aren't really facing an enemy alien force, just hostile life forms on a human colony.

And a boar I'm quite smitten with.

The boss is a wanted man living off the land. He's a bit deranged, but dangerous!

Right now, boss rooms are in but for testing purposes they are pretty sparse: 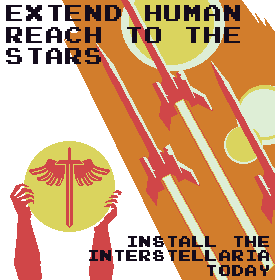 So that's it. We're considering a kickstarter, so keep your eyes peeled for more information about that. The amount of content we'd like to create is massive. We could use a few outside hires. In addition, there are so many licenses needed. I think our dilemma is knowing how much to ask for. We're not looking for a cash grab, but we want to be realistic with how much something like this could cost.

If you guys want to get in contact with me, hit me up on twitter! I'm super responsive and love feedback! Twitter.com

I really enjoy the artwork and concept. Keep it up!

....When did Terraria get in my FTL?
Congrats sir, you've impressed me yet again.