Post news RSS In Papo & Yo, Graffiti is Part of the Experience

Learn about the beautiful, surreal environment that Papo & Yo takes place in.

Hey everyone, Vander here. In my development career, I have never worked with authentic artists from the game’s locale. The project’s art director is usually instructed to mimic what he can find from reference pictures. But in Papo & Yo, I didn’t want to do the same thing. I wanted it to be genuine. And I wanted local artists on the other side of the continent to have access to the beautiful canvas of video games.Here’s the full story from Deborah Chantson, our community manager.

As you might know, Papo & Yo is a metaphorical, semi-autobiographical story of Creative Director Vander Caballero’s tumultuous relationship with his alcoholic father. While the game’s storyline will draw players into an emotional journey, we also designed the environment to help immerse the player in a surreal Latin American setting. There’s a high level of authenticity on display, from the landscape to the music, style, and graffiti.In North America, graffiti is changing to include more artistic works such as murals, but it’s generally associated with spray painted tags and defaced walls. In Latin America, graffiti is a treasured art form because of its long history with political messaging. Artists work with communities and residents who ask for it, contributing their time and talent to beautify the landscape with spray paint. Several of them are quite famous for it! 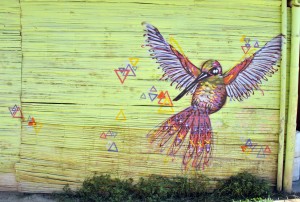 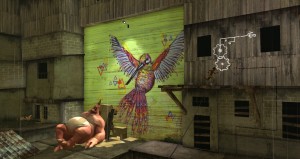 In Papo & Yo, players will notice images of birds, lions and portraits that appear sprayed, drawn, or painted on walls through all five acts. It’s worth noting that these are real works of graffiti art licenced for use in the game, taken from the vibrant street art scene in major cities like Brazil’s Sao Paulo, and Chile’s Valparaiso and Santiago. These cities are so renowned for their graffiti that, while Sao Paulo is a capital of the hip hop graffiti scene, it’s also grown to be one of the top traditional art capitals of the world.Chile, too, is an international hub for artists and graffiti tourists in search of large canvases and inspiration. The most popular draw is Valparaiso, a bustling San Francisco-like port city where the neighborhoods look like stacked building blocks (like in Papo & Yo), built along hills. There’s an abundance of available surfaces to be blasted with color. Given that it’s a generations-old tradition, there’s a high standard to meet when emulating these works inside the game. 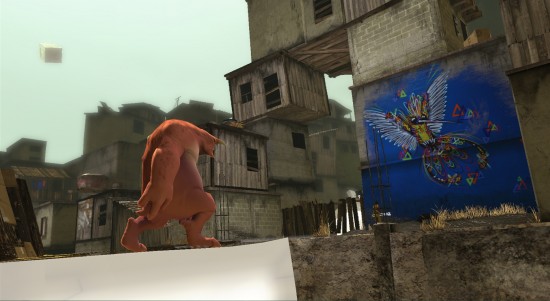 Sebastian Navarro (AKA Charquipunk), Simon Paulo Arancibia Gutierrez (AKA La Robot de Madera) and Inti Castro (AKA INTI) are the three celebrity graffiti artists lending their work to Papo & Yo. Charquipunk is known for his intricately detailed large-scale designs of cats and birds, while La Robot de Madera focuses on elaborate portraits. INTI is known for his work with kusillo, the Altiplano carnival clown whose costumes consist of clothing scraps. When they collaborate, which is often, each artist’s style is still distinct, but their synergy is electric.

Their connection to Papo & Yo game developer, Minority Media, is through Montreal-based Pablo Aravena, a Chilean-born graffiti expert and filmmaker with several documentaries under his belt. These include Next: A Primer on Urban Painting and his upcoming Chile Estyle, which tells the fascinating story of Chilean graffiti evolving from Mexican muralist movements and mural brigades to the hip hop scene today. A longtime friend of Papo & Yo Executive Producer Ernest Webb, Aravena acted as art curator and consultant when it came to the graffiti that appears in the game. Aravena took care to ensure Papo & Yo’s environment is strongly reminiscent of Valparaiso, where subcultures collide into a dynamic tapestry of music, art, food, and personalities — like our three artists, whom he chose specifically. “The graffiti is a natural adaptation of the vibe in the city because it was always known as a bohemian town where dudes play boleros, the sailors get off the ships to party, and there are a lot of different communities,” says Aravena. 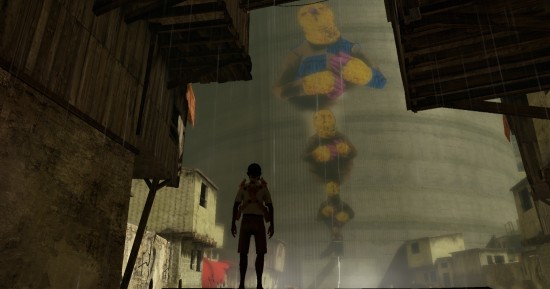 With Papo & Yo, the Minority team has tried to create an immersive experience in which players can “get lost.” The game has been categorized as fantastical realism, and there’s a sort of vulnerability that players will take on, simply by “being” in a new place. With the combination of authentically-inspired landscapes and a personally emotional story, that openness to new things is the driving force behind Papo & Yo.