Lisbon is a historical city where the sun shines 290 days a year and the temperature rarely drops below 15°C.

Lisbon is a historical city where the sun shines 290 days a year and the temperature rarely drops below 15°C. Featuring coastal views, great food, and more, it's no wonder millions of tourists visit the capital of Portugal each year. 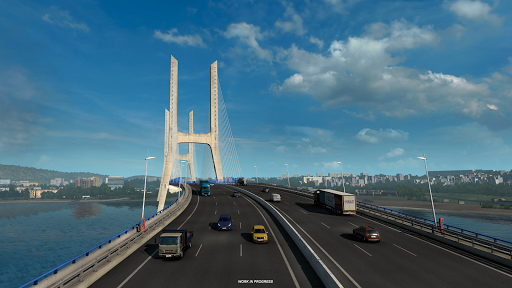 Today, we are excited to share with you a gallery of work in progress screenshots from this important city which will be featured in our upcoming Iberia DLC for Euro Truck Simulator 2. As one of the few European capitals with a river and coastline, the city has a rich history of industrial maritime history.

Lisboa also holds the title of one of the oldest cities in Western Europe; in fact, only Athens is the only other city in Europe that is estimated to be older. So what can truckers expect to see when driving in Lisbon?

Well, we don't want to spoil it too much, but with a variety of industries such as shipyards and factories, there will be plenty of outgoing and incoming deliveries to be made. Drivers will also drive near some of the well-known landmarks, including 2 bridges that will connect travelers across the Tagus River.

So with sunshine, stunning views, and deliveries to be made, we are sure Lisboa will be one of the top of destinations on your list to visit when Iberia releases.

If you haven't already, be sure to add Iberia to Steam Wishlist! It really helps supports us and notifies you of its release in the future. You can also find a few exclusive content not found on this blog across our social media channels, so be sure to look out for them on our Facebook, Twitter, and Instagram.