After a long break, HyperRogue version 11.0 is released on Steam and itch.io!

For new players who do not know the old stuff: HyperRogue is a unique turn-based roguelike, taking place in a mind-bending, infinite, non-Euclidean world. People often assume that the game takes place on a sphere, or that it is a "normal" world, just displayed in some fisheye perspective -- HyperRogue is just the opposite of that. If you think that this means some space stitched in crazy ways with invisible portals -- HyperRogue is not that either, it is non-Euclidean in actual, mathematical sense, which is much more interesting! HyperRogue takes place in a non-Euclidean world where the space itself works in a fundamentally different way to ours, where "parallel" lines do not stay parallel forever -- intuitively, whenever there are two straight lines that appear to be parallel, new space grows exponentially between them, causing them to diverge (see FAQ). In the world of HyperRogue, the number of cells in distance 1000 from the starting point make numbers such as the number of atoms in the Universe laughably small!

This version includes three new lands, a new game mode, new geometries and projections, new music, and many minor features and other improvements. 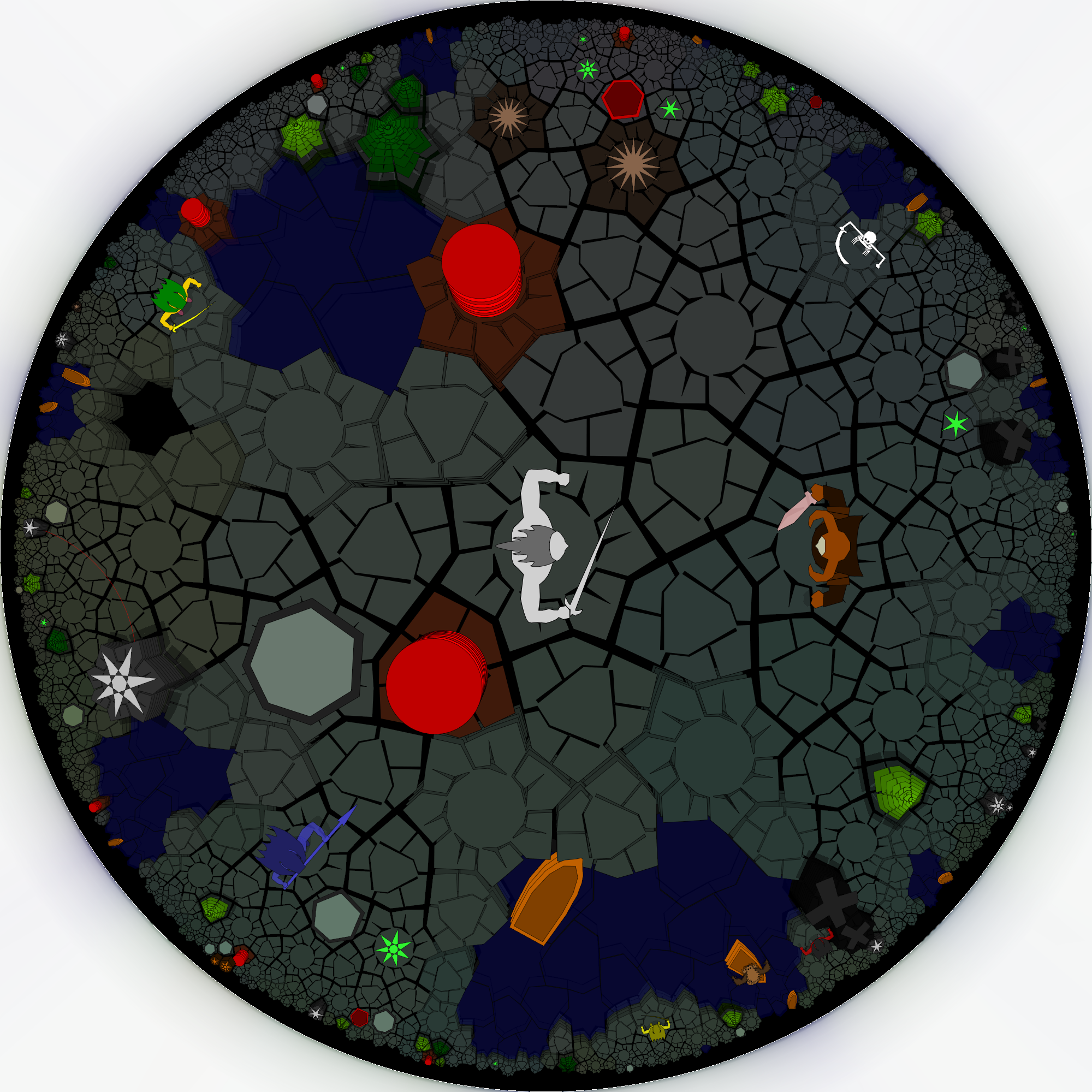 These fields are ravaged with many kinds of magical radiation, which not only make the ground glow nicely in various colors, but also cause the inhabitants to protect the treasures of their land in various ways. In some areas of the Irradiated Fields, you will meet powerful enemies, such as Pikemen, Necromancers or Brown Raiders; in other areas, you will find arrow traps, fire traps, or pools, which can kill you if you are careless, or help you if you know how to use them to your advantage. Will you walk through the Irradiated Fields randomly, or try to find areas where treasures are common but nasty monsters are not, and keep to them? It is your choice!

Galápagos was a land whose properties changed slightly as you explored it, and forced you to find a specific combination of properties; there were 2097152 combinations, but because of how compressed the HyperRogue's infinite world is, you could still find the right one quite easily. In the Irradiated Fields, the properties also change as you travel, but now, they strongly affect the gameplay, by introducing specific enemies, terrain features, or other mechanics.

Irradiated Fields can be found when you have at least 30 (75 in Orb Strategy Mode) Chrysoberyls, Emeralds, and Necromancer Totems in total.

There are several platformer lands in HyperRogue which check how the notions of "horizontal" and "vertical" would work in a hyperbolic world -- afterall, you no longer have parallel lines... The first one in HyperRogue was the Ivory Tower, where two vertical ladders with their bottoms very close have their tops quite far away. Yendorian Forest had a similar structure, with space allowing infinite, exponentially branching trees to grow; Dungeon and Lost Mountain are reversed: the space expands as we go down.

Now, the Free Fall is a land where gravity is orthogonal to the diverging straight lines. You get here through a window in what appears to be a normal (well, infinite) horizontal wall. However, on the other side, that wall turns out to be the vertical wall of an infinitely high tower. Jump from the window, and let the magical gravity carry you...

The gravity will naturally let you fall in a fixed distance from the tower, but you are able to steer your movement a bit, by changing towards outer or inner cycles. However, the space grows as you get further away you are from the tower: five steps in distance 10 from the tower correspond to roughly 15 in distance 12, roughly 45 in distance 14, roughly 135 in distance 16, and so on: in distance 110, the original five steps correspond to octillion. Want to catch a falling Meteorite? You will never catch it if you pursue it on the same cycle, but you can simply move close to the tower, and you will be able to fly faster (in some sense) and thus catch it! After fighting the angry monsters and collecting all the required treasure, and returning back to the world where you can rest on an actual floor, it is fun to check how far away we ended up from the window we originally jumped from -- despite falling for a long time, we usually end up just one or two screens from it.

Free Fall can be found when you have 5 Phoenix Feathers and 5 Ivory Figurines. 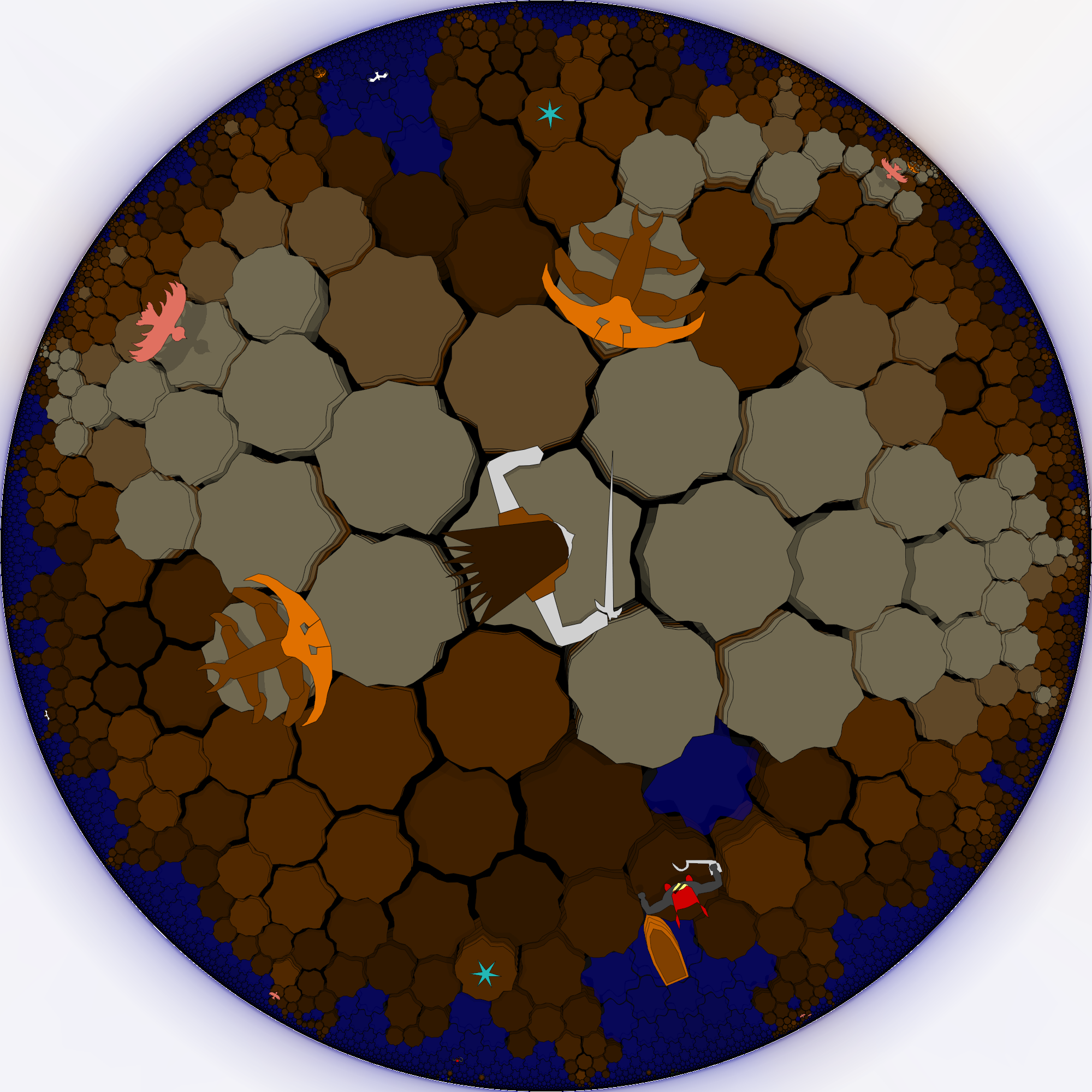 The mountainous Brown Islands have started appearing in the Ocean, and of course, they contain some treasure! Will you manage to get these treasures safely, despite the attacks of Bronze Bugs which can be only killed by dropping them into water or from a great height, Acid Gulls which melt the earth away where they die, and occasional Pirates?

What does it has to do with hyperbolic geometry? Well, the Brown Islands have been generated by ancient underground creatures, who moved randomly and raised lands in their path... adults spawned larvae in each move, which also moved randomly and also raised lands in their path, and eventually became adults and spawned their own larvae. In a Euclidean plane, it is well known that a creature moving randomly on a two-dimensional grid will get back to the original starting point (and in fact any other point) infinitely many times, so even if our creature did not multiply, it would eventually destroy the whole world with its terraforming action. The same happens if the creature moves in more dimensions, as long as it multiplies -- the space simply grows slower than its spawn. But the hyperbolic plane grows exponentially, and faster than the spawn... allowing our creatures to create interesting
terrain!

Look for strange birds in the Ocean to reach the Brown Islands.

The racing mode is a new addition to HyperRogue, which allows you to experience the hyperbolic geometry in a new way. In a normal race, it does not matter much whether you are running on the left side, center, or the right side of the track; in hyperbolic geometry, a competitor aiming to win the race will always aim to run on the center -- if they move slightly to the right, the space between their line and the central track will grow, causing them to quickly run away from their goal (if they do not turn), or take a much longer route. The animation above presents a race -- the goal is far away up. While it may look that the Princess and the Salamander have a shorter way to go, that race is in fact fair -- all the points on the white starting line are in the same distance from the goal! 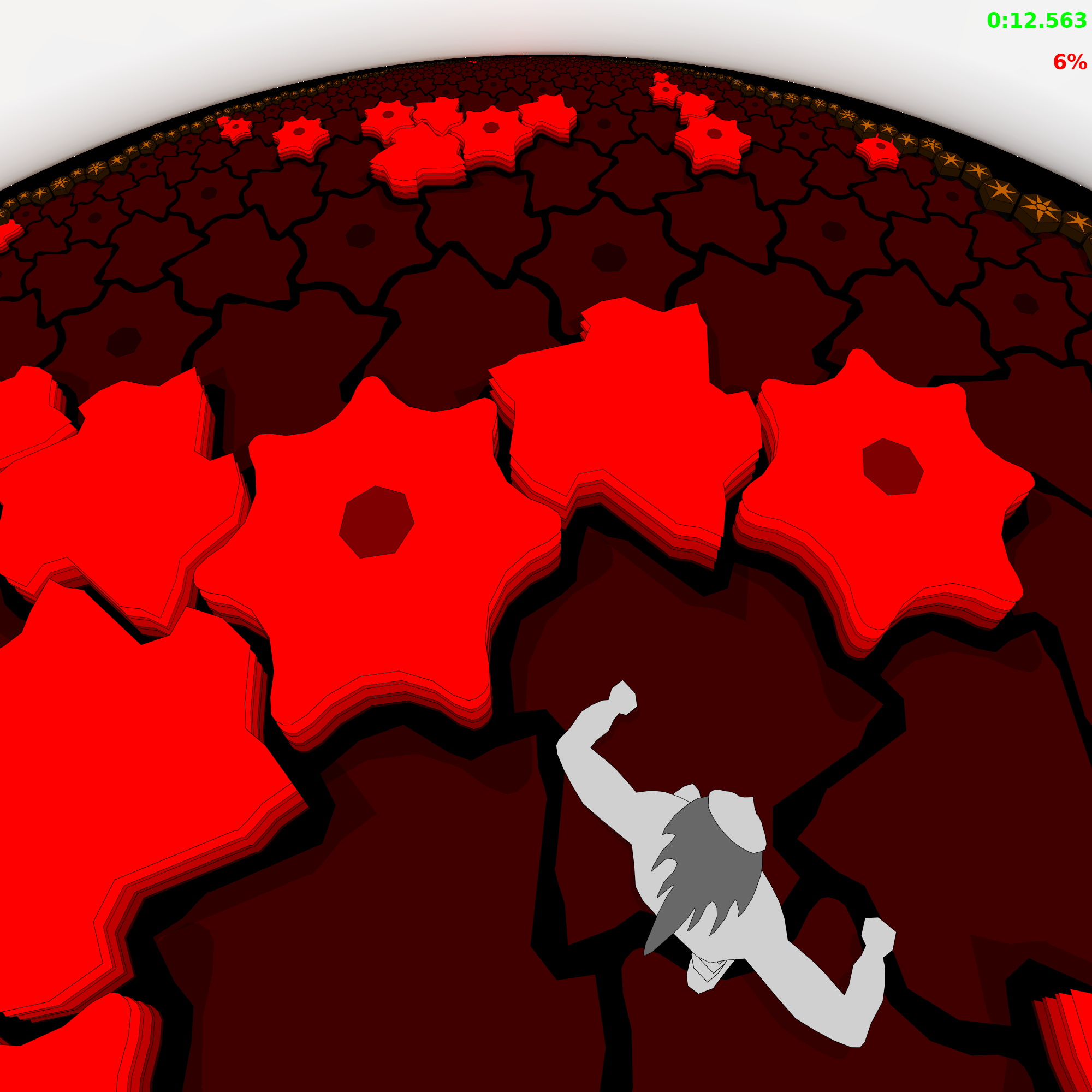 While in the usual game of HyperRogue you could be attacked from any direction, making most projections other than the usual Poincaré disk model less playable, the linear nature of the racing mode makes it fun to experiment with the other hyperbolic projections. You can race as usual -- seeing the world from the point of view of the racer, in the Poincaré disk model -- but you can also try the band model (in the animation above) which presents the whole track nicely, or the half-plane projection which gives an impression of an infinitely zooming track; or the third person perspective mode (pictured above).
Whatever you choose, hyperbolic racing is challenging even on a straight line -- while you can run as fast as you want, if you run too fast, it is really hard to stay on the track when the space grows exponentially before you. A moment of carelessness, and you start running in a completely wrong direction! 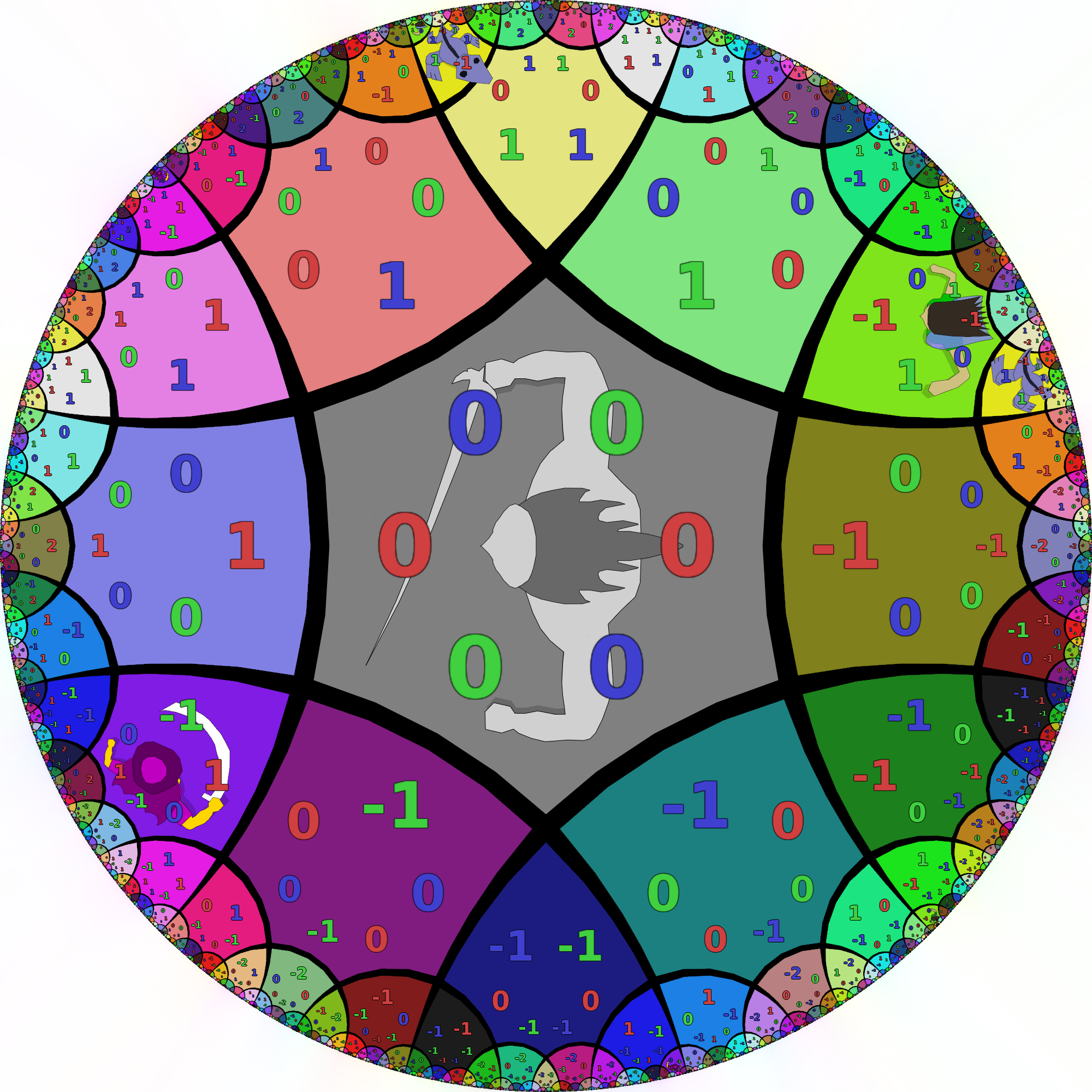 There have been some updates after the last announced version (10.4)... while significant, they were not announced, because they were more concerned with experimentation with geometry and topology rather than gameplay -- and I believe that a big update should include new and well balanced gameplay. The picture above presents probably the most interesting of the new geometries. At the first glance, it appears that we are on the hyperbolic plane, in {6,4} tiling. But look closer... The Princess and the Reptile appear multiple times, which suggests this is actually a single Princess and a single Reptile in a wrapped space, and we can see this pair looking into multiple directions (the light rays follow the curvature of the surface). What space it is? Well, look at the numbers -- each cell has a red, green, and blue coordinate, and in each adjacent cell, exactly one coordinate changes by exactly one. This has the same connection structure as a kind of crystal (say, NaCl) in three dimensions -- each grid point is connected to the point to north, south, east, west, up, and down! More precisely, it turns out that what we see here is a periodic surface pictured below.

This construction works in more dimensions too... so you can play in something which looks like a hyperbolic plane, but is actually, say, a four-dimensional "crystal" grid. Can you find the Holy Grail, in four-dimensional Camelot, put right in the center of a four-dimensional ball? While it looks like hyperbolic geometry, the gameplay is Euclidean -- normally in HyperRogue, if you get attacked in a free area by two monsters at once, you can "move in an extra direction" (provided by the hyperbolic nature of the world) to force them to line up. However, this does not work in this geometry -- if you flee, both monsters will always find a way to get next to you again! It is easy to see that this will be the case when you consider the multi-dimensional Euclidean world this geometry models. This space is available in the "Experiment with Geometry" special game mode, check "show quotient spaces" and choose "dimensional crystal".

HyperRogue 11 also includes new music by Will Savino -- while still a long way from having a unique music for each of over 60 lands,the new additions make the soundtrack much more balanced and matching the theme. Also lots of minor improvements are added -- see the changelog for the details. The original idea of hyperbolic racing mode is by Triple_Agent_AAA, and the new lands are roughly based on the ideas of many players in the "Suggestions for the new lands" thread, including J Pystynen, bluetailedgnat, wonderfullizardofoz, and tehora. The free version has been updated to 10.5d, so it also includes some new minor features (but no Racing mode, no new lands, and no social features such as achievements, leaderboards, and the Strange Challenge).

This is not the end, new lands are planned. Will we reach 100 lands? For now, get HyperRogue v11 from Steam or itch.io, and have fun!

What an osom work man