I thought it would be a good occasion to share some of the background story, prior to the events in Hoarder.

The nameless Evil Lord is one of the four brothers which came from the depths of Hell to terrorize the human lands. He ruled with an iron fist for centuries the Kingdom of Eternal Spring with the help of his minions.

The general belief is that initially the goblins were the first minions to serve an Evil Lord. It is said that, Glen Dragonsbottom, a goblin shaman, was the first to cut the magic veil that separates the underworld from the overworld, offering passage for the Four Brothers of Doom.
For centuries Evil worked it's ways to enslave the lands and there was a time when darkness was everywhere, but the balance of Evil and Good was upset. From the oppressed humans rise five brave souls, five heroes to fight against unjustice and tyranny.

Little Timmy, a very massive and courageous farmer, came from the great plains near Goblin Caves. He was so big that no minion dared attack him.

Leeroy Pandragon, a seasoned war veteran which came from the lands around the Red Lake. Since early childhood, he was bath in a special concoction which rendered him immune to spells.

Svalinn Longreach, the best of all archers from the famous eastern Dra'kar desert. He could snipe the tiniest target from a great range with his legendary siege bow.

Avidus Iscariot, a brilliant mind that invented the first steam golem. This construct was virtually immune to any weapon and could hurdle huge rocks at Evil's ramparts.

Agrella Bathory Sunspear, probably the most powerful hero of them all. Dedicating her life to please the gods of light she was blessed with magic powers that were a challenge to the Evil Lords themselves.

Together, the five brave heroes marched against the hordes of Evil until there was nothing left to conquer. With one last great effort, the humans breached into the Dark Tower, the seat of power for Evil in the Kingdom of Eternal Spring. They took the countless riches amassed in the tower's treasury and powerless to slay him, they imprisoned the Dark Lord.

Two centuries passed since these events. The long peace took its toll on the humans. The heroes got lazy and old, the people forgot about the glory days and the oppression days. The great artifacts plundered from the tower are lost in the fog of time.

One other thing is forgotten. The most important thing of them all, which should have never been forgotten. The Dark Lord, imprisoned in the catacombs of the, now ruined, Dark Tower. Our story begins when Bozben, the great-great-great grandson of Glen Dragonsbottom, finds a way to release his Dark Lord from imprisonment...

This is the background story. I hope you enjoyed it and we welcome you to check out our IndieGoGo campaign if you haven't yet! 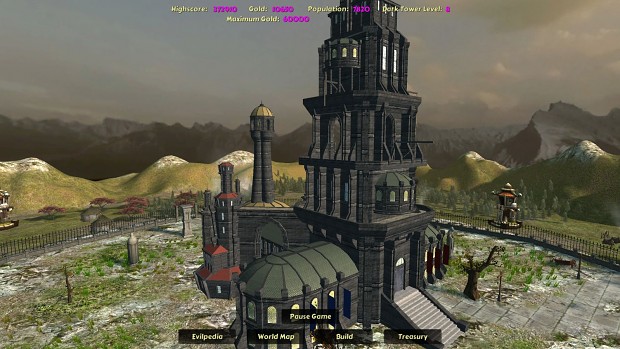