Imagine a game where your actions can help turn the tide of a persistent online war being fought by thousands of other real players, either in the role of a hardened soldier engaged in blistering first-person shooter combat, or as a strategic officer managing the grand scheme of the campaign on a tactical war map. Heroes & Generals will deliver this combined one-two punch in a thrilling multiplayer online battle across authentic WW II settings.

As H&G enters a vital playable testing phase, we encourage all gamers to enlist for an Alpha-key now at our www.heroesandgenerals.com community site. 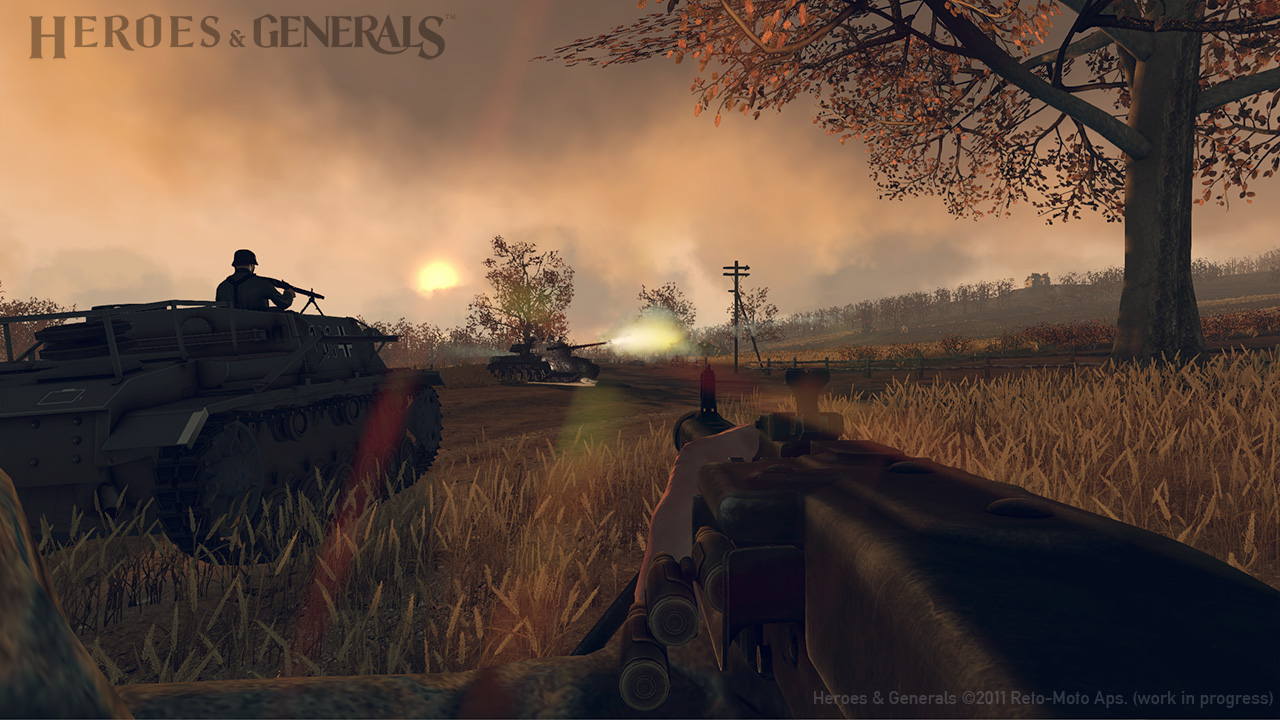 One great war with thousands of players

Heroes & Generals delivers a full blown first-person shooter experience, complete with intense infantry and vehicle combat in a wide variety of modes and missions, fought on behalf of the Axis or Allies. As your customizable character advances in rank, you might join a small squad of elite soldiers operating behind enemy lines, or fall-in with a larger section fighting an epic battle for a strategic bridgehead.

The result of every clash alters the ongoing battle for European domination. Each conflict takes place across diverse battlegrounds including contested cities, factories, airfields and war torn country-sides, each one represented on the strategic map with hundreds of key locations.

As these battles are waged, resources and global strategies are managed on a tactical overview map linked to the game’s innovative War Server. Here, players who choose to be strategic officers will have the entire map at their disposal and can decide how to manage battlefield assets and where to push the attack. 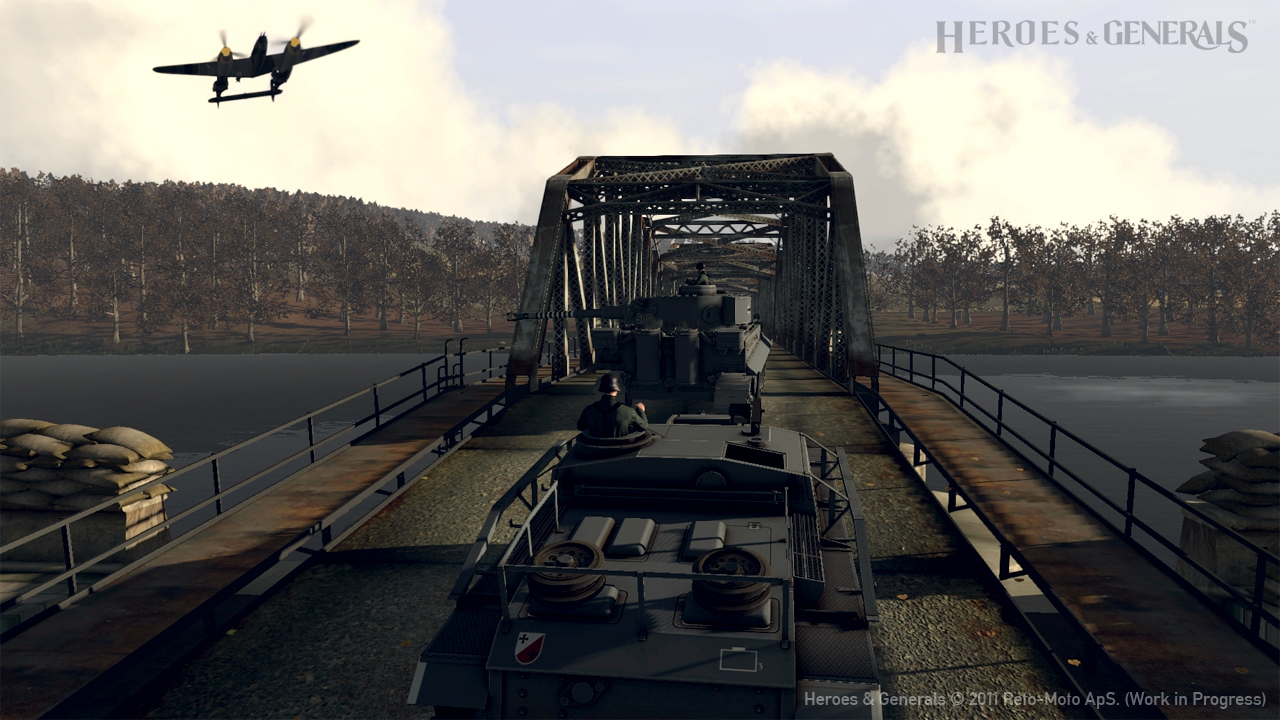 Influence the fate of millions within your browser

Heroes & Generals is a PC game that’s fully playable in a browser, yet it offers state-of-the-art graphics and sound thanks to the proprietary Retox engine built by Reto-Moto. We call H&G a “Mass Participation Game”, a term that not only describes the ease of access and massive-scale warfare, but also our goal to create a game that embraces open feedback from the community at every step – including our current Alpha stage.

Heroes & Generals will offer incomparable early hands-on access and participation: A real opportunity for gamers to influence everything from map layout to weapon handling, truly evolving the game’s design alongside dedicated interaction with Reto-Moto team members. 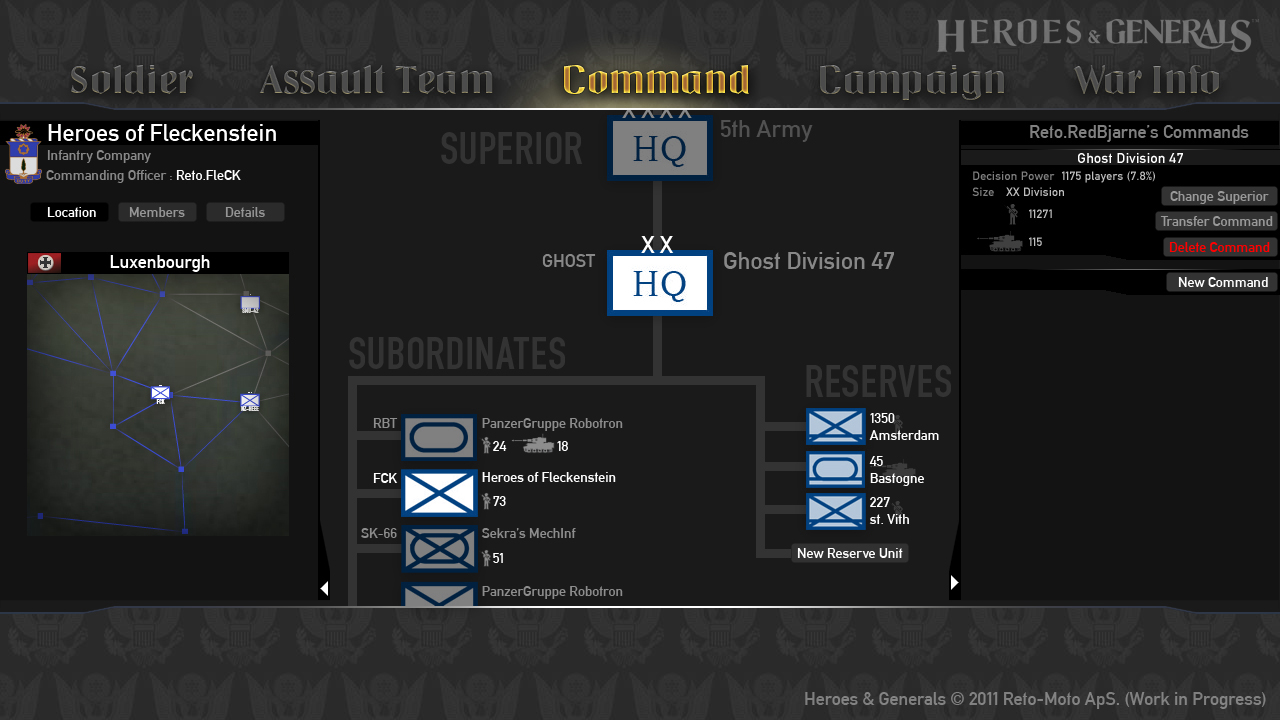 Reto-Moto was founded in 1997 and quickly transformed into IO Interactive, which went on to release Hitman and Freedom Fighters. In 2004 IO Interactive was sold to Eidos, however the founding members of Reto-Moto left Eidos and reformed their old company, bringing in some of the core developers from IO Interactive. Heroes & Generals is the first game from Reto-Moto.

Me to! This looks awesome!

World War II Online: Battleground Europe is a massively multiplayer online first-person shooter (MMOFPS) computer game. It was released was on June 6, 2001 for Windows, with the Apple Macintosh version being released in 3Q 2002. The game is set in 1940-43 World War II Europe. It is a virtual battlefield, a combined arms war simulation. A player can command or crew a variety of accurately modeled aircraft, armored fighting vehicles, anti-tank guns, anti-aircraft artillery, and three naval vessels, or fight as a foot-soldier with a variety of infantry weapons. The game is played in real time alongside or against other players as German, British and French forces in a persistent world. Command structures and missions provide strategic and tactical layers while ranks provide a RPG layer by demonstrating leadership roles

Indeed, I used to play that game but it's getting old and the graphics haven't improved for quite some time (they improve some models here and there but the overall quality is still about the same), in the meantime this looks like it could be decent.

What it sounds like is a copy of Battleground europe AKA World war II online,but what it looks like is completely different. Gonna try to get an alpha key for sure

Graphics wise, yeah, it's much better.

But BG:E has worse graphics and performance is already terrible in that. Due to the thousands of potential players hiding around the corner. Can't imagine how much of a performance hog this will be.

I believe the scale of the battles will be smaller than in BG:E because its says: "Each conflict takes place across diverse battlegrounds including contested cities, factories, airfields and war torn country-sides, each one represented on the strategic map with HUNDREDS of key locations."

Looks fantastic! Hope I can snag an alpha key myself :) Played Battleground Europe for a bit but couldn't get anyone to play with me because of the graphics.

Looks like a interesting game, i would love to try it out

Sounds a bit like EVE with the whole "your actions can affect the whole game". Still, indie games are usually worth a shot.

If you are going to add Airborne divisions over Normandy, count me in alpha!

Hmmh is there something wrong with your servers? I'm trying to register, but the site 404s every time.

Yeah, I know - we're currently experiencing really heavy traffic, but are working hard to fix it. I actually think you can register now, but our community-site is still down. Otherwise go to our Facebook-page for latest news: Facebook.com

I'm actually stuck in the
"Your account was successfully registered.
Go ahead and login."-screen.
Every time I click login it shows me a 404-screen. It doesn't let me to register again with my email either because, "I already have an account".
I hope this will get fixed soon, I'd really like to try your game out.

I want one too.

Ah it finally let me to login.

Im interessted in a alpha key. I would like test your game for you and share results and my own experience.

This is awesome, cant wait to see what you guys do with planes.

Looks AMAZING!!! Can anyone explaine to me what the alpha key is?

It's a key that will give you access to their alpha build so you can test it much like a beta but one step before, you should know this! :)

I want a alpha key! Can't wait to play this.

me want alpha key as well...

How do you get a Alpha key?

You can start by signing up at our community-site. Read more about Alpha-keys here: Heroesandgenerals.com

Looks like a game I could put hundreds of hours into ;)

I can't log into the actual game, it keeps saying i have the wrong username/email and password when i just registered it, lol.

If it means anything I would gladly give input on an alpha or beta version as I am working on a history major and have some basic knowledge on World war 2.

They all want to "redefine shooters"
I learned to skip the games that say that.

can i have an alpha key please?

this looks like the modern Battleground Europe game, ofc this is way better, keep up the great work guys this game has alot of potential

How does one apply

can i have alpha key plz

Keeping an eye on this looks like it could be good fun. Lets hope i get into the alpha.

Holy ****! Are you serious about playing it on your browser! This is badass!